Design can be subjective and this was the first thing that drew my attention to these HD250BT headphones from Sennheiser. The obvious similarities to their long running HD25s, which I first started using about 25 years ago, are front and centre. Broadcasters and DJ’s the world over adopted that model and even today they can usually be seen on camera worn by sports pundits.

At a glance I was fully expecting these 250s to be in the £150-200 arena given their heritage and specifications, instead they retail at £60. All these facts combined with Apt-x low latency and a stated 25 hour battery life meant I couldn’t pass them by.

At this price point they do forego some of the niceties of the standard HD25s, they are more akin to the HD25 light version. There is no padded headband, the connections to each ear cup are fixed, given the Bluetooth nature that’s not too surprising and there’s no rotating ear cup. There’s also no way of connecting them to a source via a cable, which might be a turn off for some people. These are simple cans with no active noise reduction, although minimal isolation is provided via passive means.

Build quality is solid but simple, although some may find that it lacks finesse but you have to bear in mind the price. Function wise charging is via USB-C and there is just a single multi colour LED to indicate connection and power status. They do also provide confirmation of pairing status, volume limit and battery level via voice prompts.

These headphones do allow some minor adjustments with Sennheiser’s Smart Control app, which allows very basic EQ adjustments. Not much was needed for my ears and I found myself boosting the treble by 1db, probably more down to age related hearing loss than a deficiency in the headphones themselves. There’s no requirement to use the app though as changes to EQ and battery life reporting are the only features available for these headphones via the interface.

The EQ adjustments are quite subtle, either via a wave type control or simple bass, mid and treble sliders and you can also save your favourite adjustments as presets. If I was being picky I’d like to have seen an idea over which range the sliders are working and maybe a couple more.  On the right ear cup there’s a simple 3 button control system (power, + and -) and these are multi function, also allowing track skipping forwards and back and call rejection together with mic. mute and call rejection. I was also a little surprised at the quality of the audio over the microphone, much better than I was expecting. 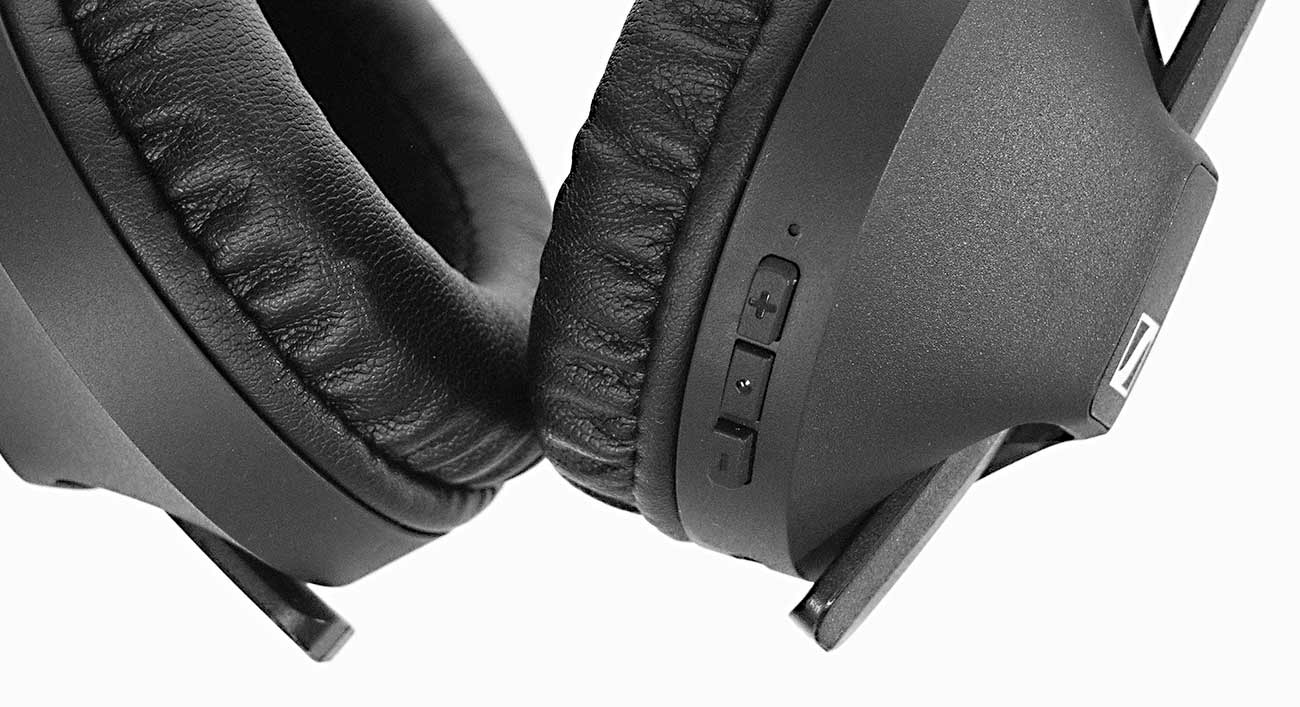 The small control buttons on the right hand ear cup.

The acoustic profile of these headphones will probably surprise some, they certainly did me. With a good seal on the ears the bass response is a bit of a revelation. That said like the HD25s getting a comfortable fit may prove elusive, it’s takes a bit of trial and error to find the best orientation. Some with larger ears may even find the fit a little uncomfortable as the cups are a small down to their supra-aural nature but again that was also an issue with the HD25s as well. They certainly don’t apply the sort of pressure on the ear that you get with those headphones.

Aftermarket velour pads meant for the HD25s do fit here after a bit of persuasion as these ear cups are slightly larger; however they compromise the low end performance quite significantly. If and when official ones for these headphones are made available they would be worth a try.

There’s also slight pressure via the headband, again I think it could do with a pad, although weighing in at only 128g, the pressure is minimal. As it’s a closed design and even with a good seal they do leak a small amount to the outside world, something you wouldn’t notice much in most environments. With library levels of background noise you can make out music at about 1.8m at a normal listening level.

As for battery life, on the box it’s stated as 25hrs. With my tests after a full charge of about 3 hours, I managed to achieve a few minutes short of 30 hours with the volume set to around 75%. With the Bluetooth 5 implementation also comes some quite impressive range figures; I tested it at 24m line of sight, which dropped to 15m when obstructed and I’m happy to report that generally the connection was very robust.

The sound of things to come?

I purchased these especially for the review after seeing how much they reminded me of HD25s and I fully expected that I was going to sell them on or return them, that’s not going to happen. Now maybe Sennheiser can accelerate the start of the nostalgia curve by making Bluetooth versions of some of their classic headphones? I’d love to see the HD580II Ovation model given a re-birth, the comfort on those was something else.