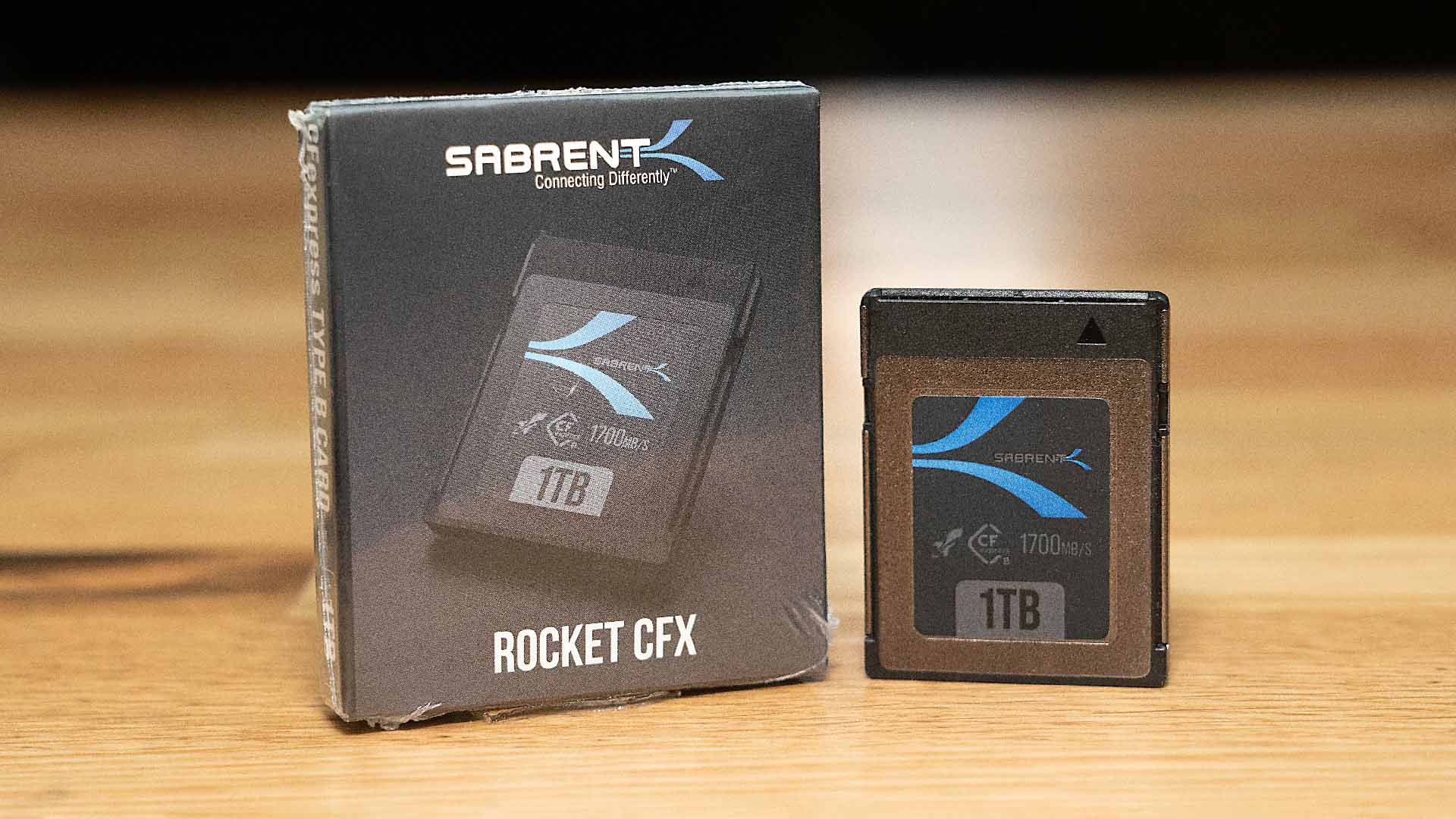 It’s another week and I have another new product from Sabrent to test. This time its new CFexpress type B cards. Currently available in two varieties, 512GB and 1TB at $339.99 and $489.99 with a 2TB version in the works.

Let’s have a look at what speeds you can expect and where the limitations might be. I started off by using the Sabrent CFexpress type B card reader (£59.99) which connects over USB-C at 10 Gb/s. All tests were done with a 2019 Mac mini 16GB, 512GB internal SSD and using Blackmagic’s Disk Speed Test.

When testing with my Mac mini into the USB A ports (a USB-C to A cable is included in the box and well as a C to C one) the speeds were rather disappointing, something I sort of expected given the implementation of USB in the Mac mini I was using. It’s well known for coming up short in that department and this hasn’t been addressed by Apple since the launch in 2019 so I’m not expecting any improvements.

In this scenario I achieved average speeds of 336MB/s write and 365MB/s read, far from ideal, but not really down to the cards themselves. This increased significantly when I plugged the reader into the on-board Thunderbolt ports as it jumped to 498MB/s write and 842MB/s read.

I did also try using my Hyperdrive Thunderbolt dock with USB-C and this gave a write average of 480MB/s write and 934MB/s read. The stated sustained speeds of these cards are 400 MB/s write and 1600MB/s read, so it looks like I was being held back here by the card reader, mainly in terms of read speed.

I also did a sense check by using the Sabrent card reader a Windows PC over USB-C (10Gb/s) and managed to get averages of 480 MB/s write and 930 MB/s read, overall slightly better than using the Mac over Thunderbolt. 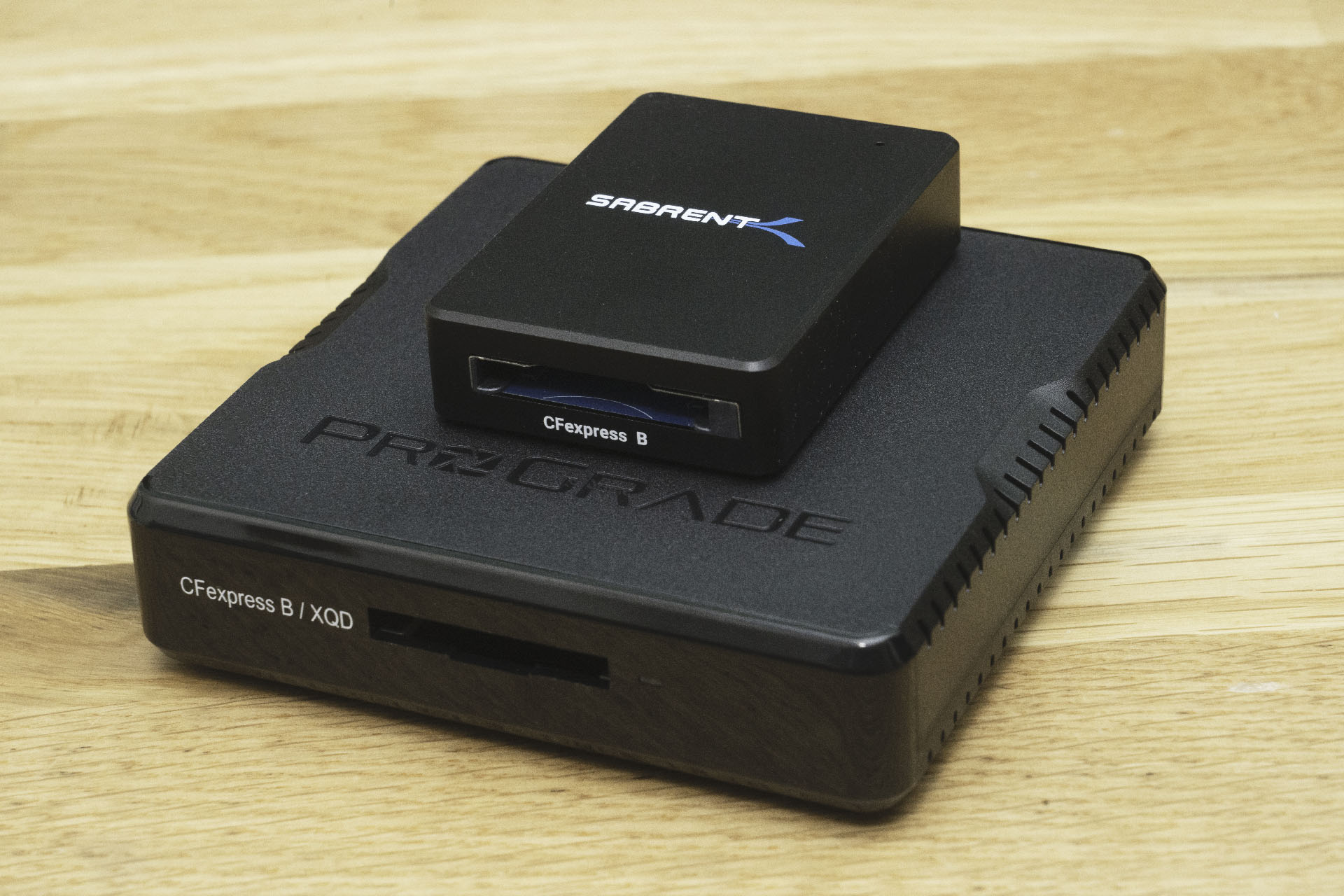 I then decided it was probably time to use a different card reader to see if I could bypass the hard limit of the connection. At time of writing there are only a few options either using a Thunderbolt 3 or USB-C Gen 3 2x2 (20Gb/s) interface this one with with an add-in PCI-e card or native support on the motherboard. I was really looking for one box solution and mainly for use on my Mac mini, so an add in card and new reader wasn’t going to work for me.

As a result I purchased the Prograde card reader (£121.97) which uses Thunderbolt 3, hoping I would see a signifiant speed increase in terms of at least in terms of read speeds.  After connecting it up this new one zipped along, reporting an average of 1490MB/s read and write speeds averaging at around 424MB/s. With this reader I also managed to get peak speeds of 700MB/s and writes of 1500, with small file transfers.

So it looks like Sabrent should be bringing a new card reader to market using Thunderbolt 3 or 4, but unfortunately development of this product has been hindered by Intel’s inability to provide sufficient chips.

As usual the devil is in the detail and card speeds are only one side of the equation, interface choice is key here. If offload times or the speed of the drives you are copying too are not a consideration then the cheaper Sabrent card reader works fine. If you need the speeds and the associated time saving then you will need to look at a faster reader than one with a USB-C 10Gb/s interface.