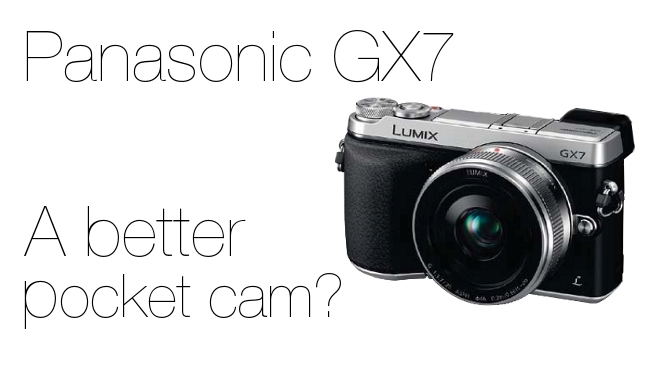 The Blackmagic Pocket Camera finally ships in a few days. But there’s a new MFT camera on the horizon. It’s missing RAW recording, but has one killer, must-have feature.

According to reports, Blackmagic Pocket Cameras will finally ship this week, just in time to meet its July target. The diminutive mirrorless Micro Four Thirds (MFT) camera records RAW 1080 HD video and will arrive at a budget friendly $995. For those that don’t own a compatible Canon DSLR for Magic Lantern RAW recording, this new offering hits all the major points: breathtaking images in an ultra compact form factor at a great price.

Just when you thought the Blackmagic Pocket Camera would establish itself as the premiere super-low budget shooter, another MFT camera is set to debut, sporting an important capability the Pocket Camera lacks.

Who needs RAW when you can...

Panasonic’s new Lumix GX7, slated for a September release, could shake-up the low-end DSLR video market. While it lacks the RAW recording of the Pocket Camera, according to 43rumors.com, the retro-style camera features “the best MFT sensor to date” and video recording at “GH3 quality.” Since test footage is not yet available, we’ll have to take their word for it. But there’s an even more exciting feature which will draw considerable interest. Reportedly, the GX7 will feature in-body image stabilization, which means it will correct your shaky handheld footage in camera even while using older, legacy glass. This could be the GX7’s biggest selling point for low-budget filmmakers, as those in the market for this camera may not own the best tripods or stabilization gear.

The Panasonic GX7 will be priced at around 1000 Euros, which is more than the Blackmagic Pocket Camera. But it’s your choice whether its capabilities warrant the premium.