Vision mixing on an iPad 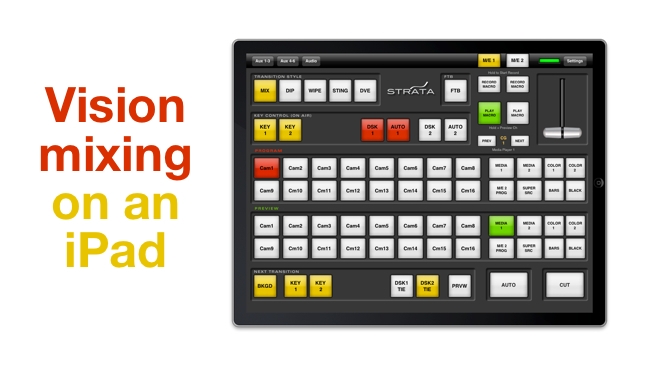 Vision mixing on an iPad

It's amazing what you can download these days. This one's a remote control app for Blackmagic's ATEM video switchers

We've seen this type of thing before (in audio mixing) but this is the first example we've seen in video.

Only three years ago, if you wanted a flexible remote controller for a mixer or any other type of complex professional physical interface, you'd have to design your own, and it woud probably have around four "0"s after the price.

But now, all the difficult stuff - the processor, the touchscreen and the communications - is completely commoditized in the form of an iPad

Control it across the room

Which means that if you make a digital video switcher that has a network connection, like the Blackmagic ATEM series, you can probably controll it wirelessly from across the room.

And that's what the Strata Pro 1.1 appears to do (you can probably guess that we haven't tried one).

It's a clever idea, but just as with other iPad replacements for physical controllers, we wonder how much you'd miss the feedback you get from touching real controls. If it turns out that you don't miss it much, then this looks like a really great idea.