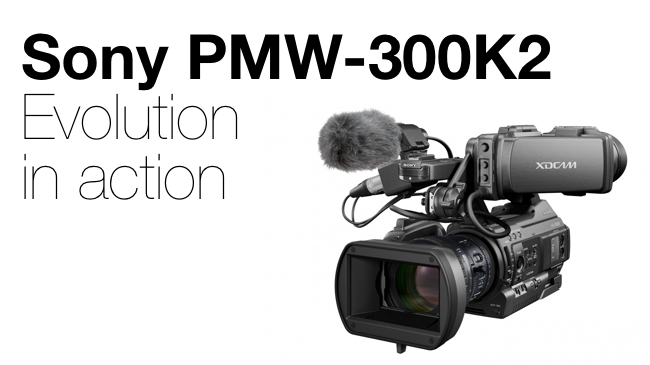 This week we've seen one industry workhorse undergo a radical and controversial transformation. Apple's Mac Pro has changed beyond recognition, pleasing some, and dismaying others, as they wonder where they're going to put their expensive expansion cards

Meanwhile, another company with their own workhorse has decided that evolution is a better approach than revolution: Sony's EX3 has evolved into a camera with better recording quality and the ability to be upgraded to Sony's live XAVC codec, which will, according to the Japanese company, give it a longer working life.

The new PMW-300K2's headline feature is 4:2:2 recording at 50Mb/s - which is the European Broadcasting Union's recommendation for cameras to be involved in making broadcast programs. It will make the new camera's colour output look more robust when broadcast and help with precision work like chroma-key.

According to the manufacturer, with 3  x 1/2" Exmor CMOS sensors, the PMW-300K2 gives clear images in low light. It also comes with a built-in neutral density filter.

We think this is a sensible move by Sony to bring their XDCAM range in line with the requirements of broadcasters, and to bring more HD quality to an increasingly demanding audience.

See Sony's full press release on the next page

Sony today announced its PMW-300 XDCAM camcorder, equipped with the 1/2-type Exmor™ Full-HD 3CMOS sensors capable of delivering incredible images even in low-light conditions. The PMW-300 is ideal for broadcast producers and corporate event camera operators who require a flexible semi-shoulder camcorder that can easily be adapted to suit a wide range of production environments.

An evolution of Sony’s industry leading PMW-EX3, the PMW-300 is able to record 50Mbps HD material in MPEG HD422, meeting broadcast standards around the world, including the European Broadcasting Union’s (EBU) requirements on HD broadcast acquisition for long form programme making. The high bit rate ensures excellent capture of fast moving objects, while its chroma subsampling feature is perfect for a wide range of video encoding areas such as VFX and green screen applications. The camcorder can also be upgraded in the future to support Sony’s revolutionary XAVC codec, extending the lifecycle of the product to ensure maximum return on investment*.

The PMW-300 features the same EX-mount interchangeable lens system as the PMW-EX3, making it compatible with a wide range of 1/2 inch and 2/3 inch lenses. There are two types of lens packages planned to be available for the PMW-300. One is with a 14 times zoom lens, and the other is with a 16 times zoom lens. Both lenses have a focus ring for quick switching between auto and manual focus.

With an HD-SD/SDI output and an HDMI output, the PMW-300 connects not only to broadcast infrastructures, but also to consumer devices equipped with HDMI inputs. Timecode and genlock interfaces enable use in multi-camera setups and 3D configurations. The 8-pin remote connector allows for remote adjustment from a remote control sold separately.

The camcorder has a standard recording mode of 1080/25p, offering a vast range of shooting options, switching down to 720/25 to enable up to 2.5x slow motion.

Based on customer feedback the PMW-300 features an innovative semi-shoulder design that has a rotary hand grip, allowing comfortable recording over long periods of time. Its magnesium metal body ensures the camcorder is robust and like its predecessor, the PMW-EX3, can withstand even the harshest production environments.

Like all of Sony’s solid state XDCAM camcorders, the PMW-300 has the most flexible choice of recording media in the market, allowing customers to choose to record on Sony’s professional SxS memory card as well as other media such as SD, Memory Stick and XQD cards depending upon their budget and application.

Coupling the PMW-300 with accessories such as one of Sony’s UWP professional audio line-up will ensure a best in class user experience.

“The PMW-300 incorporates all the market leading features from our XDCAM family in a semi-shoulder HD422 50Mbps camcorder,” said Bill Drummond, Strategic Marketing Manager, Sony Professional Solutions, Sony Europe. “From working closely with our customers we know there is strong demand for a truly versatile semi-shoulder camcorder that has been designed to meet the needs of the broadcast, production and corporate event worlds.”