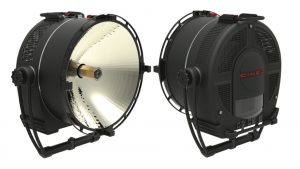 It costs $23k and is firmly something you would rent rather than buy. But it shows just how far LED lighting has come in a fairly short amount of time.

There are a lot of LED lights coming out in the 1500W range. That’s mainly because it’s about the maximum load that an American domestic mains socket can handle, at least without someone standing by with a fire extinguisher and a pocketful of spare fuses. Even Mole-Richardson’s mighty “20K LED” has the option to draw its power from two 15-amp NEMA connectors to achieve the 3000-watt nameplate rating. 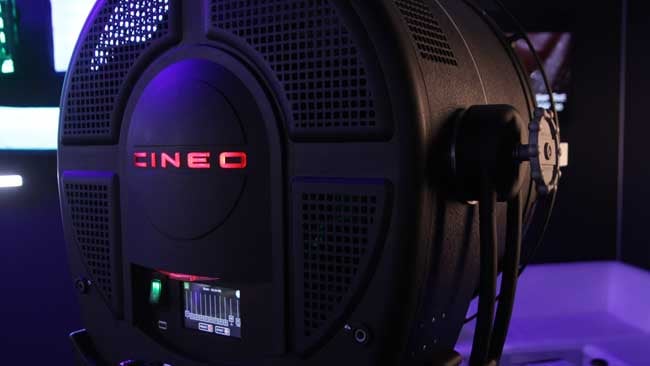 So, the specification of Cineo’s 1500-watt ReFlex R15 is not unprecedented. It’s a big LED PAR, with emphasis on the big. Most PARs around this power level, something like an Arri M18, might take 330mm accessories, implying a reflector diameter a bit less than a foot. The R15 is much bigger than that and while size and weight are generally to be minimised there’s much to like about a large reflector. The reflector in a lighting device is an electromagnetic antenna in exactly the same way as a giant radio-telescope or satellite dish. More size means more gain and more gain means more light, and that happens by capturing more of the photons coming out of the LEDs themselves.

This isn’t a review – it’s based on having encountered the R15 on a trade show floor – but one of the key things it achieves is a reasonably attractive beam pattern, albeit with a rather dubious shadowing behaviour given the big area of reflector. PARs often have horrible beam quality, especially if they’ve been designed to achieve absolute maximum light output and for driving diffusion. In 2020, we have more efficient ways of creating soft light than firing light into the back of a diffuser, so the maximum-output design approach arguably makes less sense than it once did. So, if there’s a compromise involved in the apparently fairly clean beam on the R15, it’s one that makes sense. Nobody’s buying a big LED hard light to then push it through a big diffusion panel, at least not as an ideal. 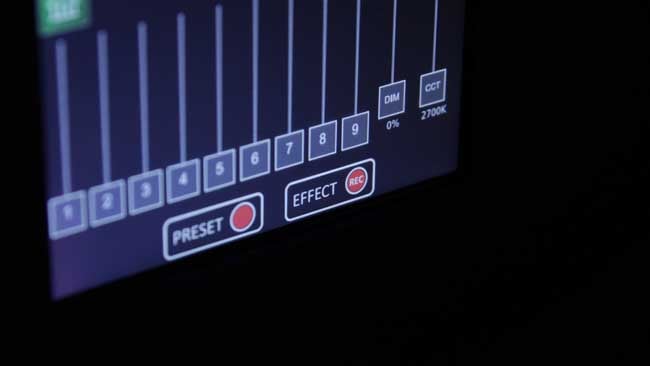 The downside of size is, well, size, and the R15 is not a tiny device for its power level. Nor is it particularly featherweight. An Arri M18 – which isn’t an entirely fair comparison since it doesn’t have variable colour temperature, drift-free dimming or waterproofing – weighs 20 kilos including an EB Max 1.8 ballast. The R15, with its power controller built-in, is considerably heavier at 27.3 kilos. It would be reasonable to assume that at least part of the offset is down to the R15’s cooling system which pumps a liquid coolant across the emitter area. A glance through the cooling vents at the back reveals that the internal doesn’t look too steampunk, with plastic tubes and connectors, but it has to weigh something. 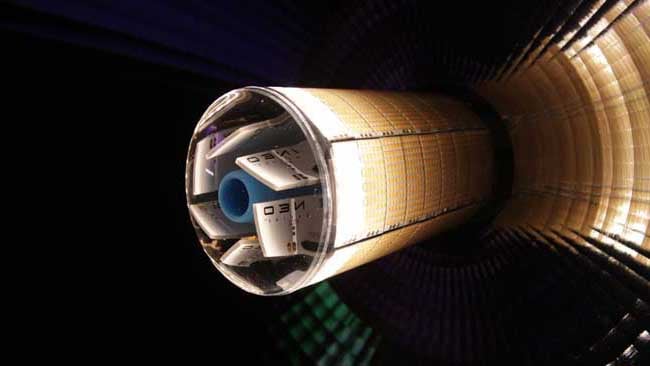 The business end. It's full of coolant

We’re in the early days of this sort of thing, with various manufacturers pushing LEDs up in power to replace more and more HMI. It’s involved some interesting engineering. The short-term conclusion seems to be that it is currently expensive – the Cineo ReFlex R15 lists online for US$23,500 – and there will often need to be some quite specific circumstances in order for the light to make financial sense. Even at studio rates, we could burn a lot of power before the R15 paid for itself, though if we were out on some super-remote location and managed to avoid the need for a generator truck, things might be different.