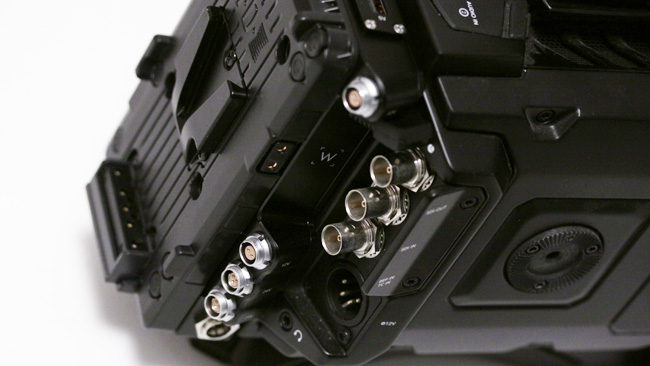 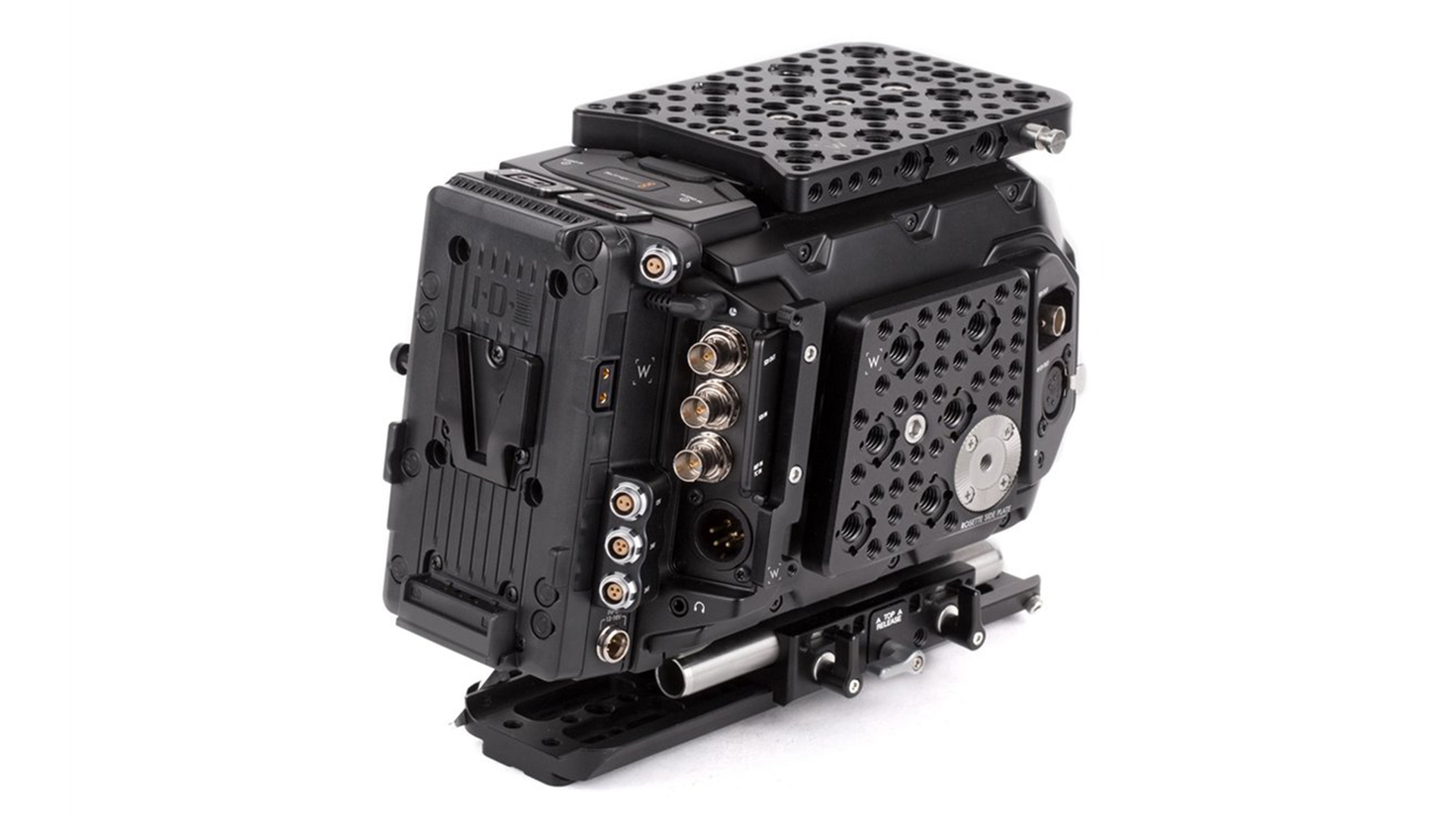 Review: Wooden Camera's D-Box aims to allow camera users much more control and versatility over power distribution. Whether you're running wireless receivers or mounting to a Steadicam, this is an accessory that solves a number of issues.

Most battery plates on cameras have a power output connector that’s called a P-tap or a D-tap, depending on who you bought it from. The original use for this sort of thing was for on-camera lights, but now that the fashion is for camera outfits to be built from a collection of parts manufactured by as many different companies as possible, there’s always something to plug in. And then, when we go on the dolly, or the crane, or the Steadicam, we discover that the power socket on the battery plate stops working when we take off the battery and plug in external DC power. 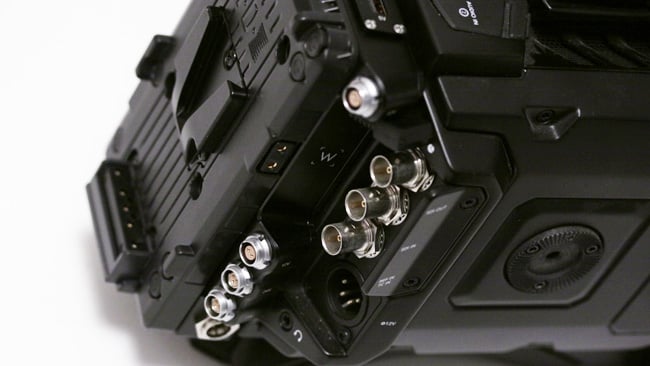 Wooden Camera’s D-Box is a power distribution system which solves that problem and quite a few others. It’s available in several incarnations, but the version seen here is specifically built for the Ursa Mini series. It provides a D-tap that stays active, regardless of whether we’re running from a V-lock or external power, and the switch between the two is automatic, preferring external power to spare the battery. An LED on the operator side changes colour to indicate the active power input.

There’s also a 5V USB and two 24-volt outputs on 3-pin Fischer-compatible connectors. These implement an Arri-style remote start-stop using a very short flying lead which provides LANC control to the Ursa body. The 24V boost converter is capable of supplying 2A continuously, which might be exceeded by particularly hungry remote focus gear but will be enough for a lot of scenarios. There are two 2-pin Lemo (compatible) 12V power connectors which loop through the unregulated input power. 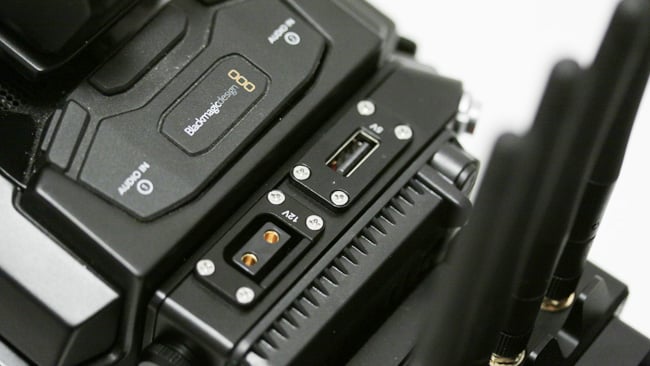 These stay active regardless of the source of power

Given all this, the D-Box is quite a lot more than just a power distribution device. Installation takes a few steps but is generally straightforward. Happily, Blackmagic used a straightforward Molex connector so the battery plate can be easily removed from the back of the camera. Removing the plate from the back of the D-Box (four screws, screwdriver) reveals four more recessed screws (Allen key) which, when loosened, allow the back plate to be removed. Four of the supplied countersunk screws (screwdriver again) attach the backplate to the camera, whereupon the D-box itself can be screwed to the back plate and the battery plate put on the D-box. A standard human can do it in ten minutes.

There are only two gotchas: remember to plug the output cable into the camera before securing the backplate and plug the LANC cable into the camera before screwing the D-box down, or it’ll be very tricky to do later. There are versions which have a battery plate on both sides and require effectively no installation, but when we start to stack on more accessories – as shown with the Teradek Bolt 4K here – things get wobbly quickly if we rely on battery mounts to hold everything together. Bolting the thing down is a much better mechanical approach and the plug-in connectors are a lot more convincing than all those sliding battery contacts given the fairly large loads sometimes involved. 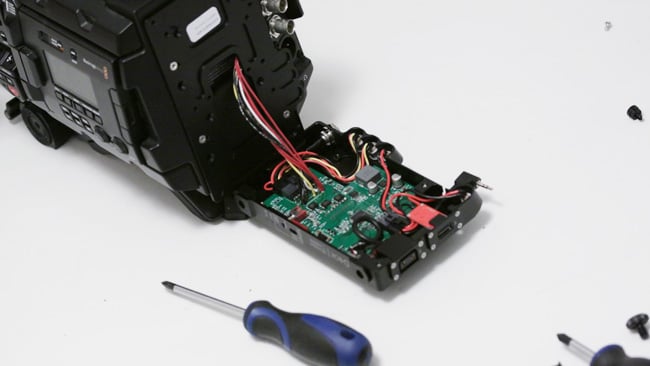 Installation could take ten minutes, less if you've done it before

The issue of power loading is one that needs to be quite carefully considered, not because there’s anything wrong with the D-Box but because modern cameras can be quite demanding. The Ursa Mini might pull 45-50W, which is a reasonably stern load, and the Bolt 4K as pictured here might need another 20W. That means that we’re at 65-ish watts before we’ve plugged anything into the D-Box itself. The system is pictured here with Anton-Bauer Titon 150 batteries, which are probably a sensible minimum for this sort of setup and ought to provide a solid couple of hours of runtime.

If things get too scary, there’s a programmable current trip on the operator side which can be set for 3.8, 5.8 or 9 amps, though that probably shouldn’t be taken as an indication that any particular power source can actually supply nine amps for accessories plus what the camera draws. Large cinema batteries probably will, but smaller ones are often fused at ten amps and something else is likely to trip before a nine-amp breaker will. Still, it’s a nice feature to have and saves carrying a lot of fuses, though some of the connectors are still conventionally fused. 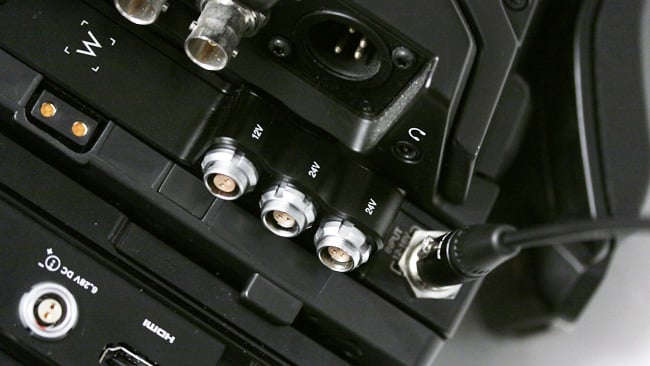 The two three-pin Fischer connectors have 2A of 24V power shared between them, and an active Arri-compatible run-stop control.

DC power input is via a miniature four-pin XLR, with a short adapter cable to full-size four-pin XLR provided. This is perhaps the least ideal part of the design. Yes, XLRs are bulky and would have made the whole thing thicker, but at some point, we’re saving a sliver of space at the expense of carrying an extra cable (which we can lose, must reasonably have spares of, etc.). Some versions of the D-Box have had a full-size XLR and this might be a better option for some people, though there’s nothing objectively wrong with the miniature connectors used here. 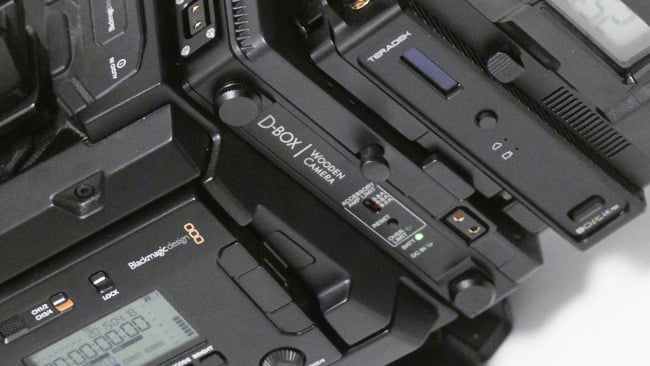 It’s easy to assume that these features should be part of every camera and to some extent, that’s not an unfair conclusion. The situation where the accessory power sockets go dead when the camera isn’t on battery power is not great. Wooden Camera’s product is overkill just to solve that problem and probably also overkill if you don’t need the 24V and Arri start-stop features. What it does do is to put something like the Ursa Mini, which has a base configuration we could charitably call svelte, into a configuration that’s much more familiar to exactly the sort of people who would look for somewhere to plug in a remote focus receiver. The D-Box reviewed here lists on Wooden Camera’s site for $995, plus tax.

This is the sort of thing that, if you need it, you need it. If you have specific requirements, the company has a configurable version which can be set up as required with a variety of modular connector options, so it’s a utility device that can cater to a lot of needs.