The Abyss: We look back on James Cameron's groundbreaking thriller 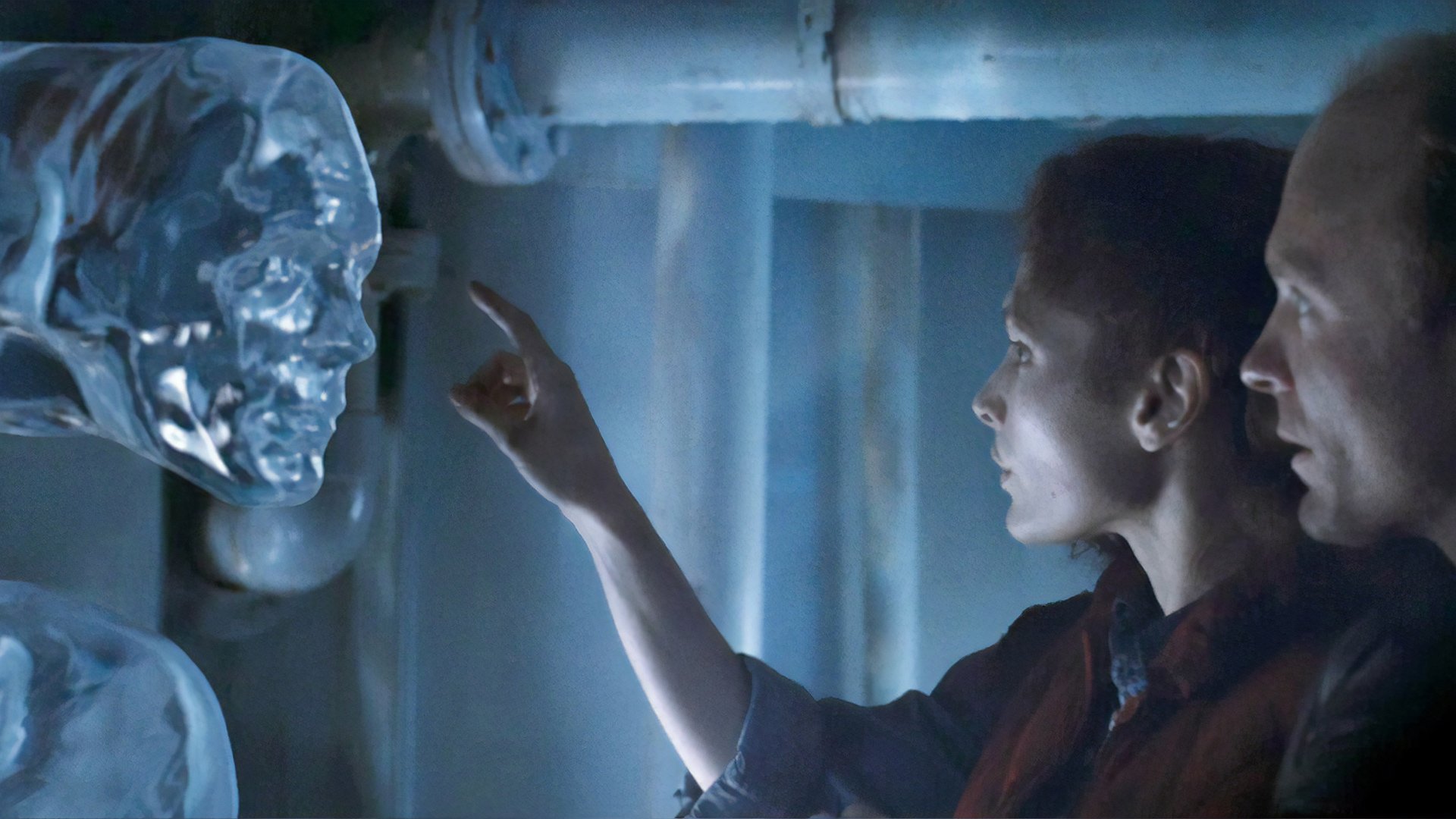 30 years ago, director James Cameron released his fourth movie, The Abyss. Although one of his less-remembered films, dwarfed by his blockbuster hits like Titanic, Aliens and the first two Terminator films, The Abyss’s place in history is assured by its groundbreaking CGI. But that was just one of the many achievements of this underrated underwater thriller.

Cameron had started out working as an art director for Roger Corman on Battle Beyond the Stars, before being hired to direct Piranha II: The Spawning in 1981. Although he was soon fired from the watery sequel, the setting must have appealed because - after his breakout hit The Terminator and his celebrated addition to the Alien franchise - he would return to aquatic locales for The Abyss, not to mention Titanic and his subsequent diving documentaries.

The Abyss stars Ed Harris as Bud, who leads the team of an experimental underwater oil rig, Deep Core. When a submarine goes missing, Bud, his colleague and ex-wife Lindsey (Mary Elizabeth Mastrantonio) and their team are co-opted by Navy SEALS to investigate. Tensions run high aboard Deep Core as Michael Biehn’s Lt. Coffey recovers nukes from the submarine wreck and the rig is visited by mysterious aliens.

To say it was an ambitious production is an understatement. To facilitate the 40% of principal photography which would take place underwater, the world’s largest fresh-water filtered tank was constructed in the cooling tower of an abandoned nuclear power station, with a capacity equal to about eleven Olympic swimming pools. Black beads and a huge tarpaulin were used to block daylight, simulating the darkness in the depths of the ocean.

Custom diving helmets were constructed, an underwater oxygen filling station was developed, and an array of lighting fixtures were waterproofed, including the first ever underwater HMIs. Another first for a theatrical motion picture was the recording of sync-sound underwater, which involved the cast banging a slate against their helmets as a “clap”. 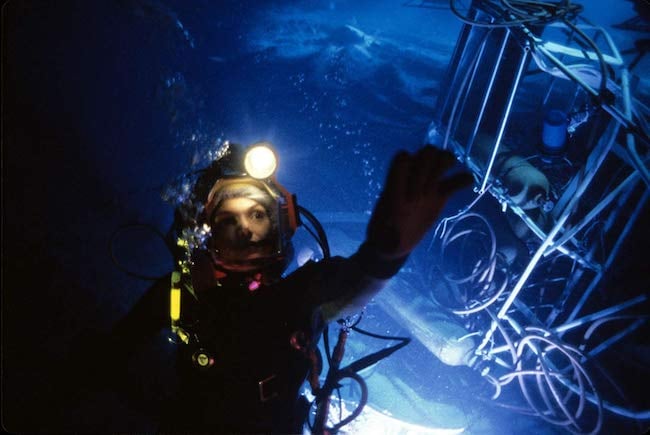 The long days underwater (which became nights after a storm carried the tarpaulin away) and the many problems (including leaks in the tank) took their toll on the cast and crew. Harris famously stated that he would never speak about the film, a decision he later recanted, while Mastrantonio stormed off set screaming, “We are not animals!” after Cameron pushed her too far in an emotional scene.

The VFX requirements were just as daunting as principal photography. Although Cameron is known for his cutting-edge effects, his 20th century films actually use a wide array of techniques from the simplest to the most complex. The CGI liquid metal T-1000 in Terminator 2, for example, is intercut with brief shots of actor Robert Patrick in a silver foil costume, and for all the budgetary excesses of Titanic, there’s a shot where the famous ship is nothing more than a cardboard cut-out.

The Abyss also ran the gamut of techniques. A dramatic chase between two submersibles combines full-size mid-shots in the huge tank, close-ups of the actors shot on stage, rear-projection shots over their shoulders to the view outside, quarter-scale radio-controlled miniatures, and dry-for-wet motion control miniatures with tiny built-in projectors showing footage of the actors. A shot of a sub’s glass dome cracking was accomplished by backlighting a jagged arrangement of sellotape stuck to it!

The miniatures crew even shot scale models of the surface ships on the real ocean, while another team designed and built transparent glowing puppets of the aliens which were shot in a studio tank.

But it was the sequence where the aliens manipulate a tendril of water which would prove to be the most signficant to the history of cinema. As Bud and his crew sleep, a column of water rises from Deep Core’s moon pool and explores the rig curiously. When Lindsey and the others wake up, the “pseudopod” - as it was known to the crew - mimics their faces in a magical moment of non-verbal communication.

Computer-generated imagery was not new to cinema in 1989, but its uses has been limited. 1982 had seen Star Trek II: The Wrath of Khan feature the first all-digital shot in cinema - the Genesis device terraforming a planet - as well as the classic Tron with its many wireframe images. A major breakthrough had come in 1985 with the family adventure Young Sherlock Holmes, in which a knight sprang to life out of a stained-glass window, becoming the first ever CG character in film.

George Lucas’ effects house Industrial Light and Magic was behind most of these advances, and although they considered traditional stop-motion animation to realise The Abyss’ pseudopod, the creature’s transparent and reflective nature prompted ILM to select cutting-edge CGI once again.

Led by Dennis Muren, the team began by designing the pseudopod hands-on via a series of resin maquettes, while simultaneously developing new software. This included the very first version of Photoshop, coded by ILM’s CG supervisor John Knoll and his brother Tom. John took 360º photos of the set and used his as-yet-unreleased software to stitch them together into a reflection map for the pseudopod.

Movement reference on set was supplied by two grips carrying a length of hose from an air conditioner, much to the amusement of all present. 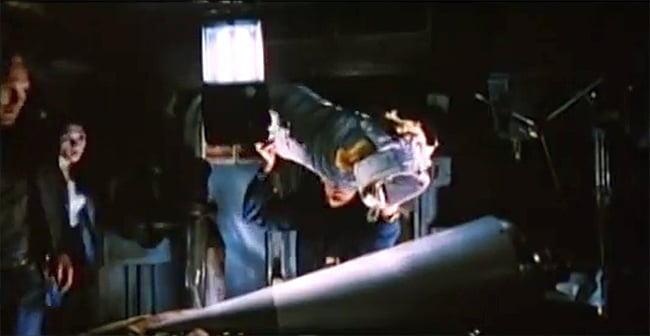 Grips had to carry a piece of air conditioning hose to stand in for the Pseudopod during shooting.

For the mimicking shots, Harris and Mastrantonio had their faces captured by a Cyberware scanner. This device circled a sitting subject, bombarding them with laser beams to map their 3D geometry. Such scanners had previously been used to morph the heads of the Enterprise crew together in Star Trek IV: The Voyage Home, and would go on to be used on Terminator 2 and many other productions.

Cameron was initially concerned that giving feedback on CGI and having it revised accordingly would be a slow and cumbersome process. His fears were alleviated by what - at the time - was a highly efficient system: ILM couriered videotapes of rough shots to the director, who printed out key frames, drew on them by hand, then faxed them back to Muren’s team. 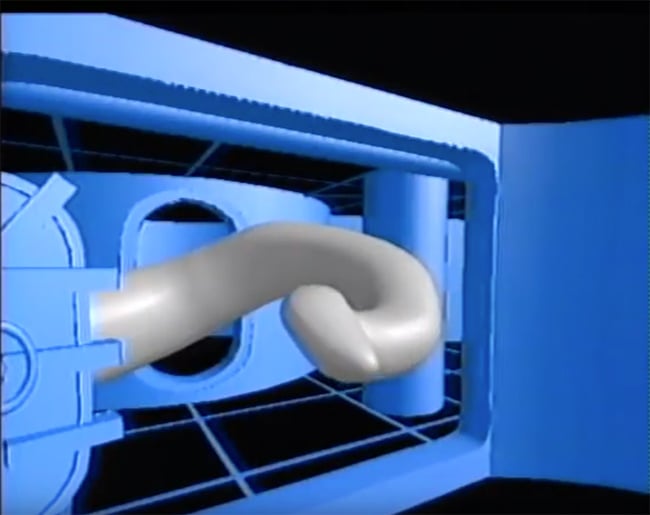 The CGI technology used in 'The Abyss' might seem antiquated by today's standards, but it arguably produced more convicing results than many much more modern movies.

Only one shot of the pseudopod - where it transformed back into ordinary water - was composited digitally. The remainder were done traditionally, with various different render passes of the CG creature recorded onto separate strips of film which were then combined on an optical printer.

The 1990 Oscars ceremony saw The Abyss honoured with an Academy Award for Best Visual Effects. Within a year, ILM were at work on Cameron’s Terminator 2: Judgment Day, which pushed the art of CGI even further. In 1993, Jurassic Park was released, and by the end of the 20th century the cinema was awash with computer generated images, most of them considerably less convincing than their landmark predecessors.

Overall, contemporary reaction to the Abyss was mixed but leaning towards the positive. Once the special edition was released in 1993, however, the film began to root itself as a cult classic. It’s well worth seeking out on DVD and Blu-ray, featuring an excellent behind-the-scenes documentary called Under Pressure. The film itself is still as gripping today as it was 30 years ago.