The popularity of large chip cameras has often meant the sidelining of smaller sensor devices. But if documentary is your focus, a camera with a large sensor can be more a hinderance than a benefit. Here, Roland Denning tells of his experiences using a Sony PXW-Z90 as an Aaton style documentary rig. Can it cut the mustard? 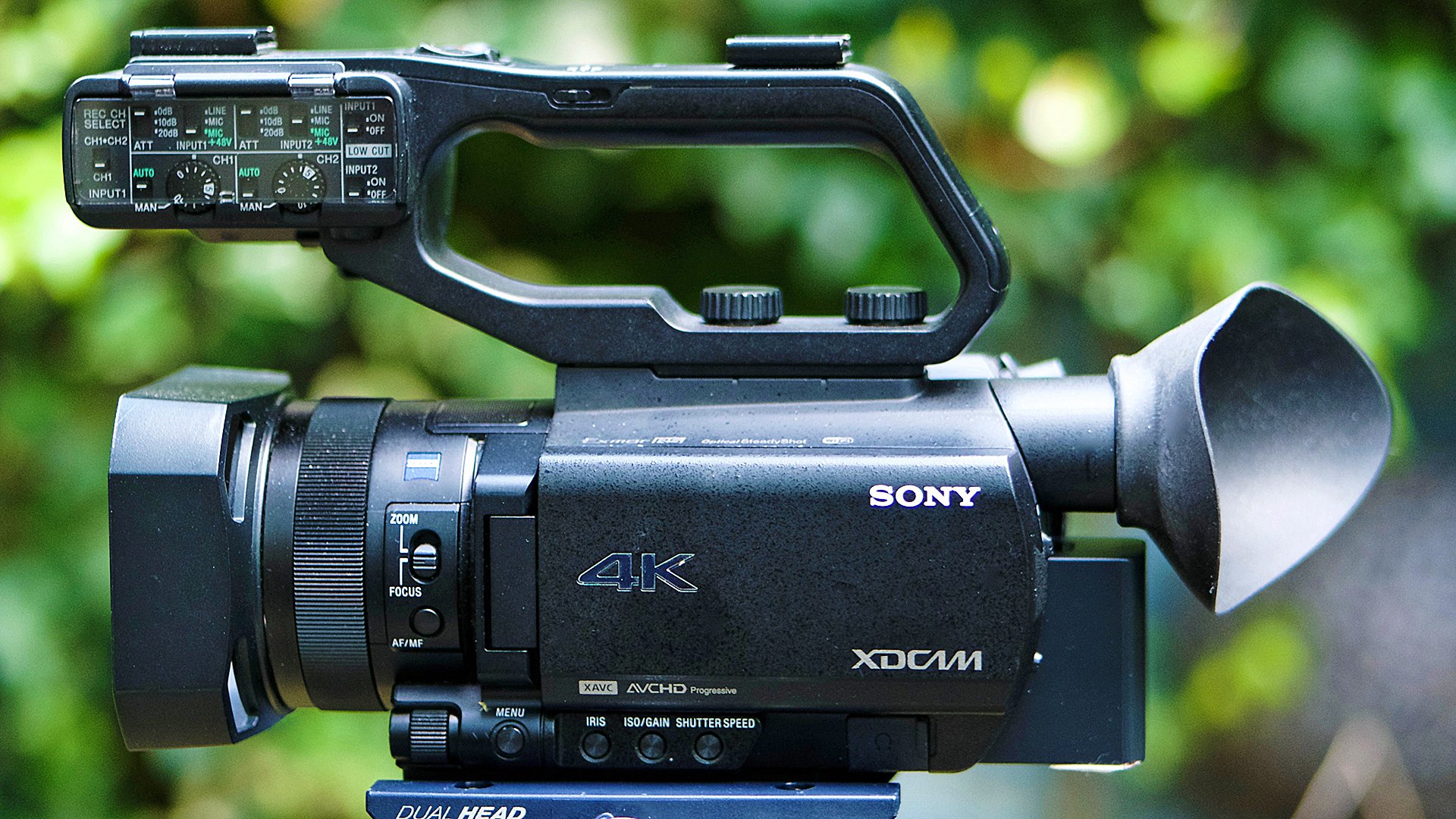 The first article I ever wrote for RedShark, around four years ago, was about the evolution of the documentary camera. In it I bemoaned the lack of an inexpensive, shoulder-mount camera with a long, fast zoom lens and a sensor around Super16 size. I gave praise to the Aaton XTR 16mm camera, a camera I once owned, for its perfect balance, its simplicity and the joy of working with a sharp, f1.8 10-1 zoom lens. Yes, it was not a cheap camera (probably at least the cost of an Arri Amira in today’s currency), but these were the days of standard kit that would last for years and standard rental charges that producers seldom questioned.

Three years on from that article I found myself buying a Sony Z90, an inexpensive camera that, to be honest, looks like a toy. In that piece I actually mocked the Z90’s predecessor, the X70, for having a lens barrel that doubles up for zoom and focus control and a small dial to adjust aperture. I have been used to separate, fully manual controls for focus, aperture and zoom for decades. So how did I end up with the Z90?

My work has moved more towards production and direction, but I still shoot, both for broadcast and corporate jobs, and for my own personal documentaries. For documentary work, there are certain things I insist on. 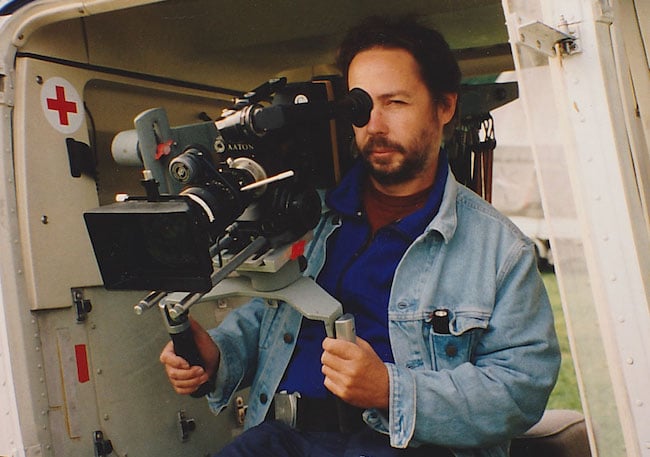 The author with his beloved Aaton

A long zoom lens is a necessity, not a convenience

I’ve said this before and I’ll say it again. I need a zoom lens. Currently, much of the work I’m doing is a combination of observational documentary and theatre and music performance. For work like that, a decent zoom lens is a necessity, not a convenience. Par-focal and at least 10 to 1, preferably 15 to 1, and with minimal breathing. Prime lenses, for me, are simply not an option; the real world does not stop for you to change lenses, and I want to move around, reframe, go from wide shots to detailed close-ups without stopping. Yes, I’m old school (or simply old), and all due respect to people who find a way of shooting docs on DSLRs and mirrorless stills cameras, but I’ve no idea how they do it.

There is now a certain DSRL doc look I’ve begun to hate; predominantly in mid shot or medium close-up, a constant hunting for focus (with hardly any shot continually sharp), and a camera that floats around aimlessly on a gimbal. Since cameras are cheap, there are often two cameras or more hovering around which don’t quite match. Yes, we have that shallow depth-of-field look that can be great in the right place (interviews, obviously, where we don’t want the background to distract) but in observational documentary, shallow DoF tends to be a disaster. This is not only because of the difficult of keeping a subject in focus, but very often you do not want to see the subject isolated from the background and prettified, and all those background details may be crucial to the story. This doesn’t just apply to documentary – if you are shooting a drama, with improvised or unpredictable elements, you may well find a zoom lens a huge advantage. 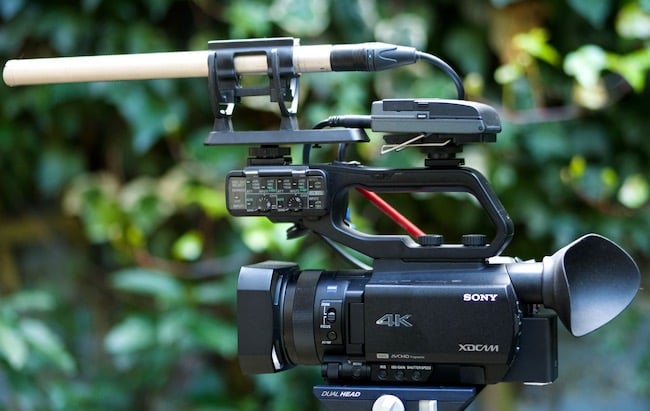 The Z90 with mics attached

Moreover, if you are filming a theatre performance, a gig or a concert, a zoom lens is essential. Although the fashion is very much against zooming in shot, music often demands some sort of movement and often a zoom is the only way to do it. The combination of a zoom and a gentle dolly move can be very effective.

Younger readers may be unaware that before the DSLR revolution of a decade ago, prime lenses were more or less unheard of on professional video cameras, and fairly rare on 16mm film cameras (generally used only in low-light situations or where an extreme wide or extreme telephoto shot was demanded).

In fact the DSLR ‘revolution’, despite enabling beautiful pictures on a tiny budget, has actually restricted the sort of films you can make. I would urge young documentary filmmakers to take a serious look at camcorders, even at the prosumer end of the range, before they plump for the DSLR/mirrorless option.

So yes, I need a zoom lens. This really limits ones options if you want small, affordable 4K camera. It means chips much larger than 1” or MFT are out, and we need to be looking at cameras with built-in zoom lenses.

An MFT sensor would probably be the optimum size for the work I do, but there is an irony with the current obsession for larger sensor sizes and shallow DoF; many zoom lenses won’t open much beyond F4 so, in terms of that quest, what you are gaining with larger chips/longer focal lengths you are losing with smaller apertures. A 2/3” chip camera or even ½” at F1.8 could actually be a more viable option for that look and, if you want to throw the background out of focus for interviews, move the camera back a few yards and go on a longer lens.

It is no surprise that the traditional shoulder-mount, ENG video camera is still in demand by broadcasters. A new generation, brought up on inexpensive cameras with high quality pictures, may be baffled by the cost and size of these cameras, but they fit the needs of that market and, from the operators point of view, they have not really been replaced. 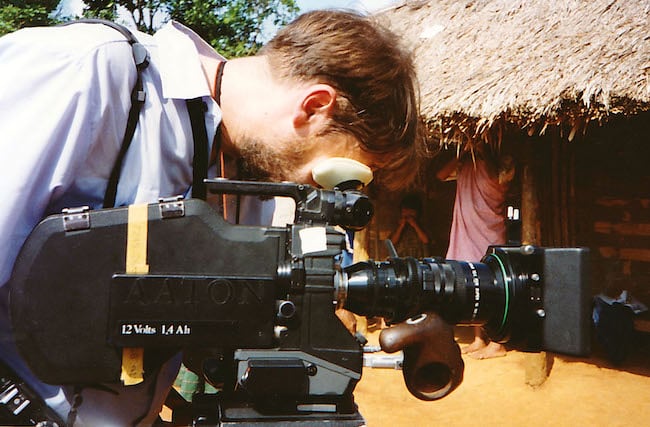 A long zoom is essential for documentary

The problem with 4k

The quest for the sort of camera I want with a long range zoom lens has become much harder with the advent of 4K. Perhaps it’s worth pausing for a moment to ask the question – do we really need 4K? I suspect the vast majority of what RedShark readers currently shoot, on whatever format it is originated, is distributed on and most probably delivered in HD.
Nevertheless, most will give two good reasons for shooting in 4K or above: firstly, it is future-proofing and, secondly, shooting on 4K allows you to re-frame in post. OK, perfectly good reasons, but it has to be one or the other – not both. If you are shooting to reframe, you are not going to make a finished 4K programme; if you are delivering in 4K you don’t have the bonus of cropping the frame without losing quality.

Even though, both for broadcast and not-broadcast, I’ve yet to actually deliver a programme in 4K, I still want that option. It has, however, made finding that perfect camera a lot harder; the truth is that the move to 4K means that the small, broadcast acceptable but inexpensive, handheld camera with built-in zoom lens needs a couple of stops more light than its predecessors did a decade ago.

Being brought up on shoulder-mount cameras that are engineered to sit on your shoulder and balance (the Aaton being the supreme example), many cameras today disappoint. Some manufacturers have given up entirely, allowing accessory makers to come up with mounts and rigs that approximate a usable design. I don’t want a camera that requires a rig to operate.

The majority of the lower cost cameras are in the ‘handheld’ format, with the viewfinder in line with lens rather than at the side, and with the weight of the camera supported by the wrist and arm alone. This may work for small light amateur cameras, it really doesn’t work for cameras that might weigh 3 kilos or more with accessories mounted – particularly if you need to handhold the camera continuously for an hour or so (as I often do). If it’s going to have to be handheld, it needs to be light, and if it’s going to be light, it needs decent stabilisation to stop it flapping around in the way that lightweight cameras do.

I want a one-piece camera that doesn’t require a bolt-on recorder or monitor or other accessories to function. I want at least two, regular, decent XLR audio inputs. I want built-in NDs. I want batteries that run for at least a couple of hours shooting. I want to be able to record broadcast standard HD at 4:2:2. I want to be able to get good looking pictures in available light. I would like independent lens rings for focus, zoom and stop. In fact, I want all the things that have been standard on professional video cameras for the past three decades. Of course I want the pictures to look great and, crucially, I want to be able to work fast and discreetly.

So here I am with the tiny, inexpensive, Sony Z90 – basically, it’s a palmcorder. Does it satisfy all my requirements? Not entirely. Just how good is it in practice? You’ll have to wait for the next part of this story.