This camera doesn't slow down when it does 4K 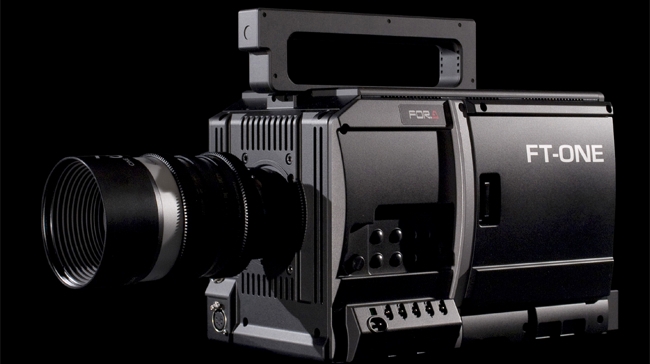 For-A have just released a new camera capable of shooting a rather amazing 900fps in 12bit 4K RAW! It’s called the FT-ONE and looks set to really shake things up in the high speed capture world!

In the past many productions have had to record the high speed segments of a movie at a lower resolution than 4K even if much of the movie was captured at 4K. For example last years Dredd movie was shot on the RED One MX with the high speed parts (of which there were quite a few) being shot on a high speed phantom camera which tops out at 200fps in 4k. Even the RED Epic is only capable of 120fps in 4k. This new camera has the potential to allow productions that are fully 4k, even for the slow motion bits.

The FT-ONE has a Super 35mm sized sensor with a global shutter (so presumably no Jello effect). It also takes PL mount lenses, so you can use exactly the same lenses for the slow motion stuff as on your main cinema camera. They are claiming a dynamic range for the camera of 11stops.

You can add 2 2TB cartridges to the camera so that you can offload your takes. These don’t increase the recording time but do allow you to offload the data and free up the memory for further takes.

The FT-One seems well suited to broadcast type situations as well with both genlock and studio style camera control units. Perhaps it will find its way onto outside broadcast trucks for recording slow-mo at sporting events? In addition to the genlock there is a dual synced camera mode for locking two cameras together for applications such as 3D.

The whole system seems to be quite well thought out and seems to fit a wide variety of situations where shooting really high speed video in 4K just has not been that possible until now. A camera like this could be a key piece of technology for use in 4k sports broadcasting for example, an area well suited to 4k. It also seems like the kind of technology that will find unexpected uses as well, perhaps through the ability to zoom into 4k content? With regard to cinema, it looks like digital video is going to bring to us speeds which we could never imagine shooting on film! Imagine how much film you would burn at 900fps? Now these speeds are really accessible with the FS700 on the lower end of things and the FT-One for the high end 4K sector.

You can get more info on the FOR-A website