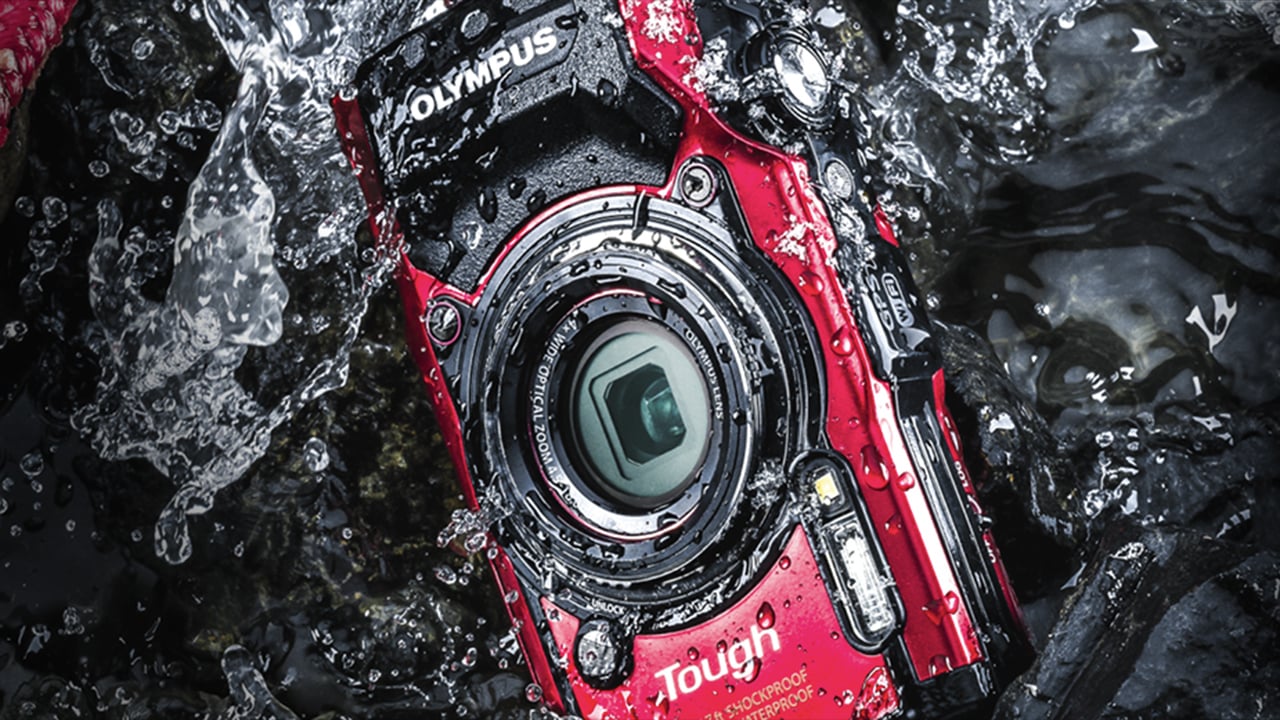 If you really do need a tough device that actually fits in your pocket and shoots 4K video Craig Marshall has a camera for that.

With an overseas photography trek looming later this year, I cast about for a lightweight waterproof camera to carry on a strenuous climb into the mountains of Taiwan at altitudes exceeding 2,500m. I had no real preconceptions about the type of camera that would be best suited and apart from the above attributes, I wanted to be able to accurately embed GPS coordinates and altitude into every shot. Our plan is to locate and photograph the remains of a high mountain Cypress logging railway which was abandoned largely intact by retreating Japanese timber cutters as Taiwan returned to Chinese control after WW II.

Today's popular outdoor 'action camera' options include the latest Smart Phones, several mirrorless DSLRs and of course, the ubiquitous GoPro, but after careful consideration, it came down to either the Nikon Coolpix W300 or Olympus Tough TG-5, both of which are designed for exactly the type of scenario I’m planning. After careful examination of the specs, I bought the Olympus because of its superior GPS data logging capability, Macro capability and it’s faster (f/2.0) 4:1 optical zoom lens. 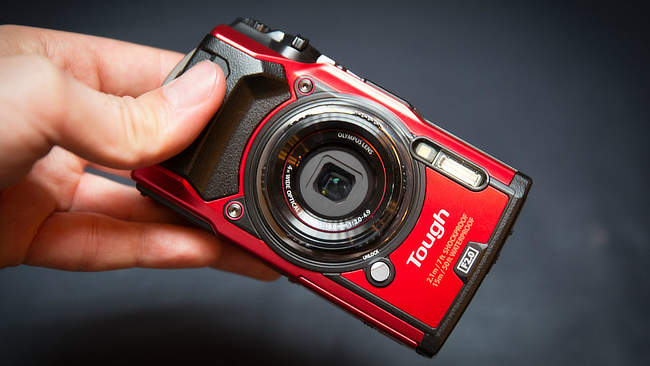 After a few weeks of comprehensive testing, there's a lot to like about the TG-5 but as with most cameras today, it is far from perfect. Let's look at some of the deficiencies… Given the TG-5 is a primarily a 'stills' camera, the lack of Shutter Priority is a disappointing omission. Aperture Priority is there with manual settings from f/2.0 to f/8.0 but the inability to lock the shutter at 180 degrees or, in my case, 1/50th for 25fps 4K video requires the use of an ND filter to keep the shutter speed 'cinematic’, thereby avoiding the all too familiar Ugly YouTube GoPro Look caused by an excessively high-speed shutter accentuating any jerky hand movements.

Dynamic Range is good and with a very fast 4:1 optical zoom, the TG-5 shines in low light

The TG-5’s 4:1 optical zoom servo motor is not proportional. It’s just one speed and it’s noisy too. Zooming should only be used to frame a shot and zooming within a video take is not recommended. Stereo audio is captured by a pair of wind vulnerable but waterproof microphones on top of the camera body and there is a horizontal VU bar-graph display on the large and easy-to-see-in-bright-sunlight LCD display. Audio recording can be adjusted +/- 10dB and although the TG- 5 offers a form of built-in stabilisation, anyone serious about shooting video should consider an aftermarket 3-axis brushless DC stabiliser capable of holding a 250g payload.

The resulting video quality from this tiny camera is exceptionally good so it's great that stabilisers are now available for almost pocket money. Exposure compensation is available, so by selecting -0.7 EV and letting the camera automatically assign exposure, I found the TG-5 producing consistently pleasing video with no clipped highlights. Although there is no official Log option, the camera offers several Sharpen, Contrast and Gradation adjustments which allow for better post grading options. As a visual comparison, I switched between a 4K H.264 frame-grab and a TG-5 RAW still converted to a 16bit 16:9 TIFF displayed on a DaVinci 4K timeline and referenced on our 10bit Rec.709 calibrated 55” 4K SDI Monitor. There was simply nothing in it, so using 4K ‘video for stills’ is an option if you don’t need the GPS feature.

With the TG-5, you have a choice of Auto or Manual Focus with Focus Assist by means of a user-selectable colour. I prefer red, but I keep mine set to Auto Focus. To avoid any hunting, Auto Focus can be 'locked’, then 'trimmed' using either Up/Down keys or the rotational wheel. This is a good system and it works very well. There is also a built-in Xenon flash, a high-powered emergency LED torch, as well as a horizontal and vertical level display.

Rolling shutter seems well controlled as is expected from modern digital cameras with a fast sensor readout. With 12 million relatively large pixels and a very fast optical zoom, the TG-5's low light capability is exceptionally good for a camera which can be bought new for just US$400. For those used to Sony or Canon menus, however, the Olympus layout is challenging, to say the least. A dedicated Menu button reveals a bewildering maze of user-adjustable parameters, but hidden below the OK button resides another layer of extremely useful features which don’t appear in the PDF manual!

The TG-5 is waterproof without a housing down to 50' and is said to be shock-proof for a 6' fall onto a hard surface. There is an optional filter ring available which adapts the camera's front face to standard 40.5mm filters. I bought the $25 adaptor with a Skylight, a Variable ND, a Graduated ND, a Wide-Angle Lens Hood, a spare Li battery and a USB charger – all cheap after-market products and IMO, each mandatory for serious field use. 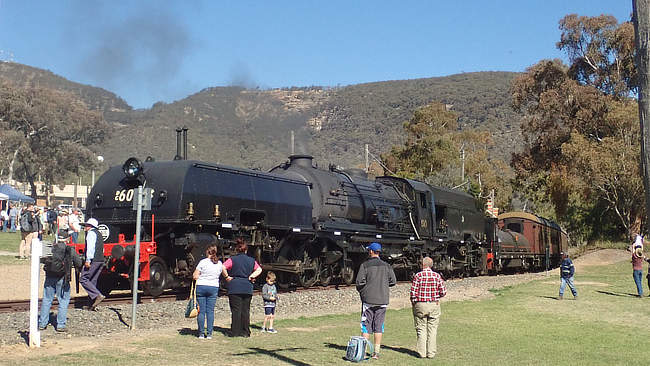 The area in which the Olympus TG-5 really shines though is as a ‘Geo-Tagging’ stills camera. Not only will it record a track and display a real-time GPS compass with the camera turned off, but the TG-5 will also encrypt your photo’s EXIF data with latitude, longitude, time, altitude, temperature, as well as the direction you pointed the camera when you clicked the trigger! Power-up time is almost instantaneous and satellite acquisition time is generally only a few seconds longer.

With Google Earth Pro now freely available, building a sequence of accurately geo-located photos on the 3D mapping software has never been easier. Several free apps allow you to group your shots and email them to friends and colleagues as either KML ‘Pin’ files or as 10:1 compressed KMZ files containing all your photos. KMZs are opened with Earth Pro to reveal your geotagged photo collection displayed at the exact location and altitude they were captured.

I was able to test out this capability on a special historic railway journey just last weekend as I travelled on the largest steam locomotive in the Southern hemisphere – Australia’s recently restored Beyer Garratt #6029. From this trip in sunny spring weather, I have prepared and uploaded three different KMZ files so readers can experience the capability of geo-tagged photos on their own computer. To see the TG-5 JPG picture quality first hand, go to this link where you’ll find a short ‘Read Me’ file detailing how to install GE Pro on your PC or Mac. Once installed, download and test the various KML/KMZ files to see how geotagging works.

Have fun exploring and let us know in the comments if it works for you. 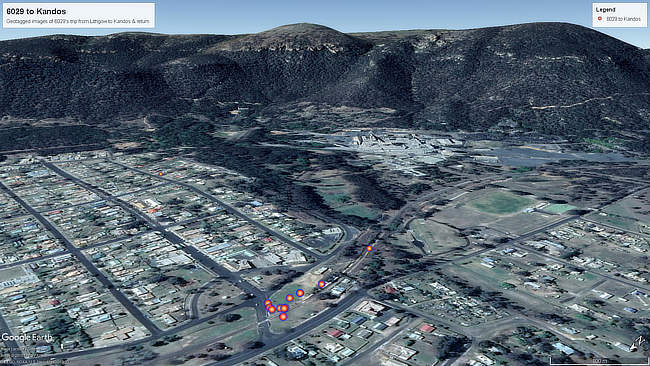