We find some hidden gems at London's Media Production Show 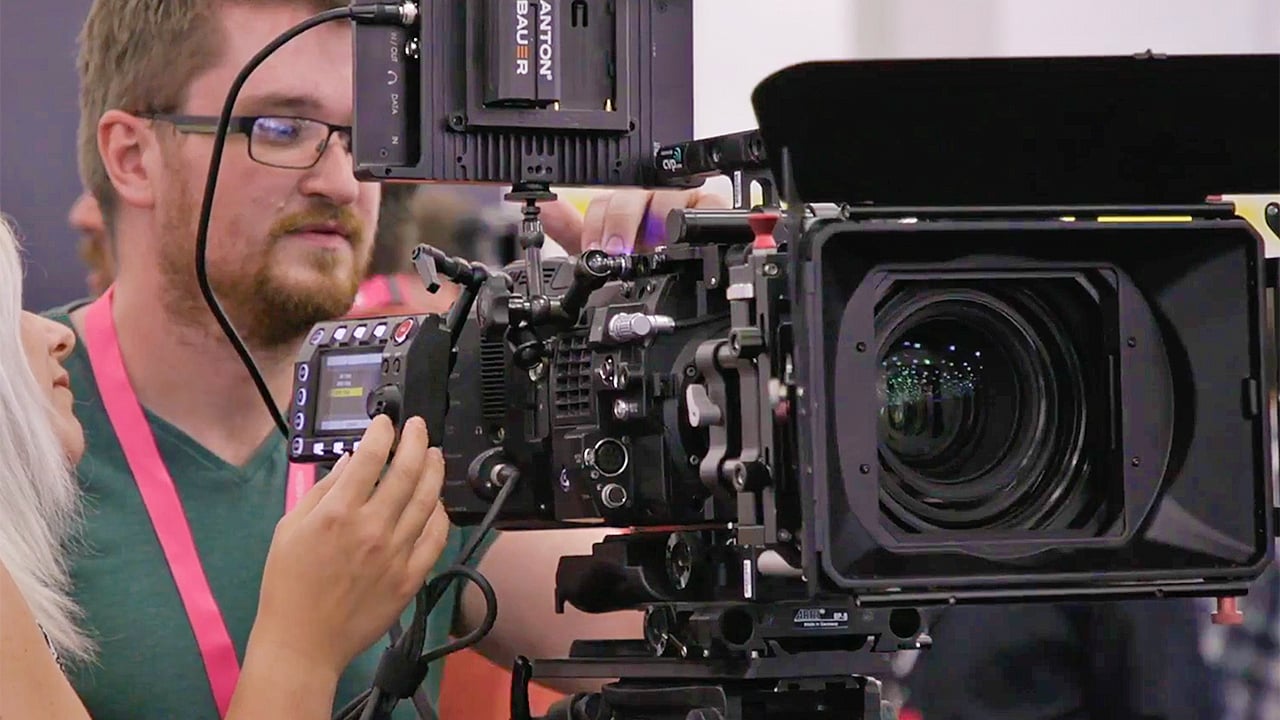 The Production Show in London is one of the major events on the UK calendar. Phil Rhodes went walkabout there and here's what he found.

The Media Production Show is the last expo that's easily accessible to people based in London until IBC in September. Let's award some, er, awards to some of the most interesting things, and let's be upfront about our preference for the less obvious and more interesting things on display.

Most Ks Per Cubic Inch 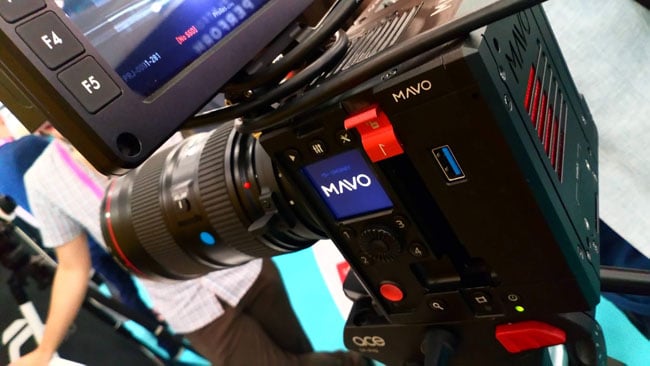 With the Terra 4K camera now showing “in stock” at dealers worldwide, Kinefinity are pushing their upcoming Mavo camera series, with the LF variant probably most likely to shine. While Sony, Canon and Arri have ensured there's no longer anything surprising about a 6K camera with a sensor the size of a 35mm stills frame, there are a few things which bode well for the Mavo's long-term usability. The 6K large-format sensor offers the same 24-megapixel resolution as the super-35mm Mavo, but double the base ISO, at 1600 over 800. That makes sense, given the 1.5 size multiplier and the larger resulting photosite dimensions.

Debate rages over whether large-format (or more accurately full-frame) cinematography is desirable or practical for most projects. Still, the full-frame and super-35mm Mavo cameras are set to offer an encouraging feature set, particularly the interchangeable mount system that's shallow enough to make the very shallow Sony - mount possible. Imaging specs are good, especially for something that's not trying to be a specialist high-speed camera, though, of course, the proof of the pictures will be in the viewing. Both Mavos promote 14 stop, 6K images in ProRes, CinemaDNG or the company's own lightly compressed raw codec at up to 66fps (or more, at lower res). Both record to commodity media. Cameras have become easier in the last few years, certainly, but if Mavo actually becomes available soon and without serious compromise, it will remain state of the art. 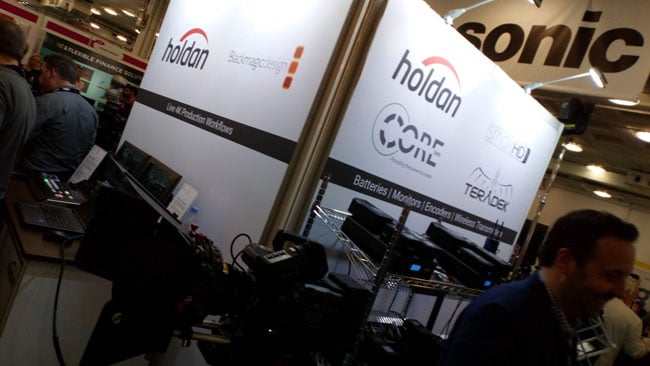 UK distributor Holdan is famous for so many things among so many different parts of the industry that it's hard to describe their core function. They've quite frequently popped up on RedShark as suppliers of Panasonic's gear, particularly the GH series stills cameras, but also with regard to Blackmagic's cameras and studio equipment, as well as SLR Magic's Anaorphot Cine primes. 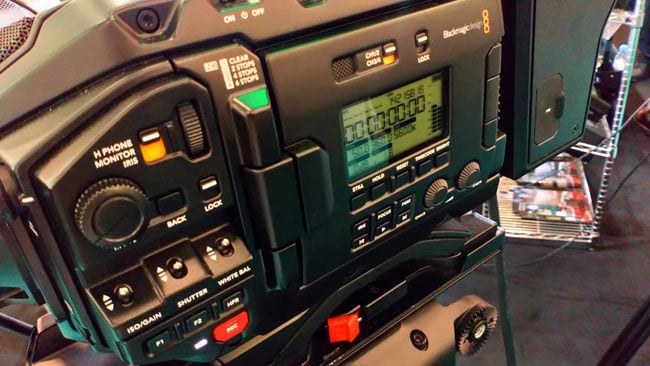 While Holdan's booth at the Production Show was certainly one of the largest there, it still seemed crowded with stuff and people. Holdan snatches the Pile of Gear award by packing so much in, finishing their display nicely with the Blackmagic Ursa Broadcast. Resplendent at one corner of the booth, the camera possibly represents the most cruelly-overlooked good idea in the recent history of moving image devices. As we found at NAB, there were at least a couple moving around the exhibition, on people's shoulders, being used, which is probably an even more convincing vote of confidence. 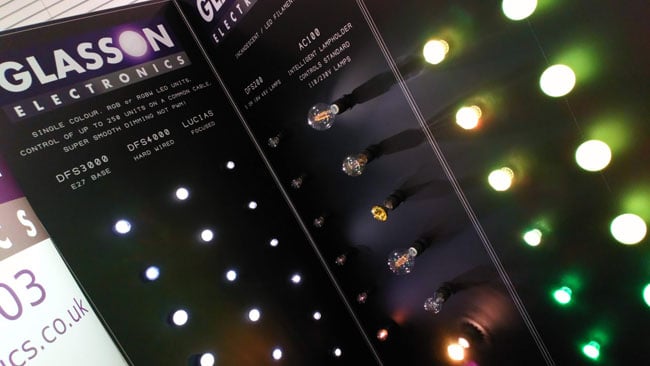 There are a lot of colour-mixing LED lights in the world, most of them found illuminating clubs and bars and exhibiting a variable degree of taste and effectiveness. Most of these lights use pulse-width modulation, a dimming technique involving turning the light on and off very quickly, to control the level of the individual red, green and blue (and sometimes white) channels. As we've discussed before, the resulting flicker can cause serious problems for camera people.

Anyone looking at the booth of Glasson Electronics from a distance would be forgiven for assuming that the company's attractive range of colour-mixing LED lights would succumb to these same issues since they're similar in appearance to many of the low-cost, dubious-quality options which have existed for years. Glance quickly toward them, though, and the lack of a visible stroboscope effect makes it clear that they're free of at least the nasty, low-frequency pulse-width modulation that plagues the cheapest options.

Approach a bit nearer and it becomes clear that these lights don't use PWM at all. Instead, they use a true DC dimming design. Control data is sent over the low-voltage power wiring, so standard, straightforward low-cost lamp-holders can be used, or they can be hardwired. It looks like a well-engineered setup, which we might look at it in a bit more detail if we can get some in on test. Don't expect precision whites, but it's a neat trick.

Most Welcome Outpost of Production Design 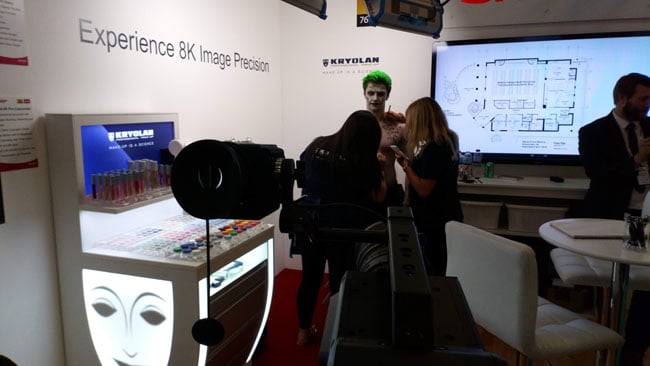 Most Welcome Outpost of Production Design

This week's event is called the production show, and while it's traditionally been mainly a technical event, there was a small outpost promoting Kryolan makeup, as well as at least one on-stage demo. Production design (including, of course, makeup) is probably the single most overlooked aspect of camerawork and very often the single most limiting factor of any production. In the very low budget world, production design is often given up on completely, in the forlorn hope that shallow depth of field and a strong backlight will cover up the problems. 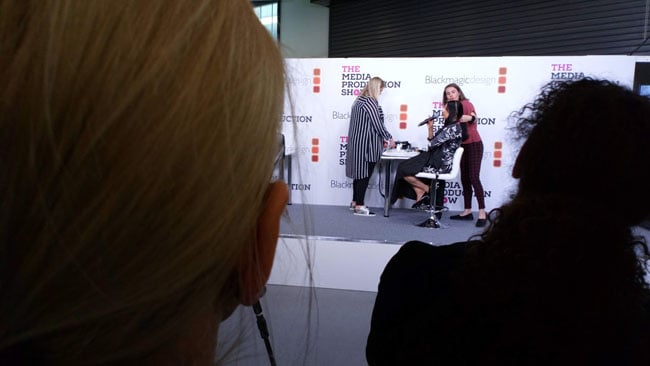 Not everyone needs a bold special makeup effect, of course, but the presence of the Kryolan team at the show is a welcome reminder that, unless there's something interesting in front of the camera, there's not a lot of point in shooting it. 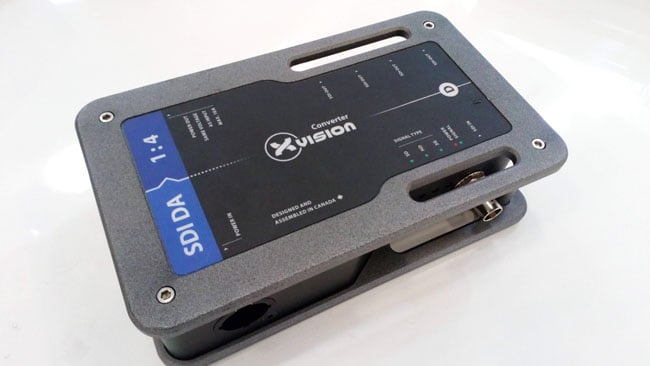 When Blackmagic launched its armour-plated range of battery-powered converters, digital imaging technicians worldwide applauded. The potentially competing XVision converter series, distributed in the UK by DigiBox, lacks the batteries but offers, if anything, an even stronger build. Each device is sandwiched between two hulking plates that look around a quarter of an inch thick and are provided with apertures suitable for hanging them from or strapping them to things. There's a magnetic latching system to allow the devices to be stacked together in a stable configuration which takes advantage of a slightly protruding non-slip rubber pad on the bottom, and a matching inset at the top.

It's a simple thing but a welcome one. The range is currently very much aimed at the live events market, which perhaps explains the choice of Powercon connectors for the mains – the only real concern. There's no question that they're a technically better option than the ubiquitous IEC C13 connectors, which generally don't latch, but they're much more common in the live events world than in filmmaking.

The Olympia exhibition centre is designed to be split up into a variety of different subunits to better accommodate several smaller shows simultaneously. This sometimes means there's only one set of facilities available to any one area, as this week. While the show is far from the largest around – it's less than half the size of the smallest hall at NAB – queueing for a bathroom break became an all-day experience. Still, it wasn't the end of the world. Being accessible to a larger number of smaller companies makes the show a good place to spot the quirky and unusual – things that might otherwise go overlooked.

It just means it isn't a great place to drink a lot of water.