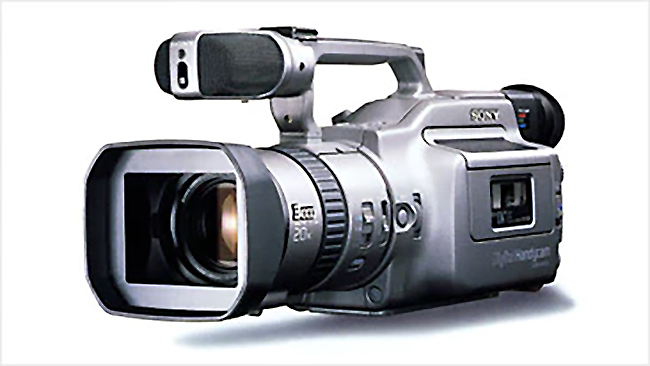 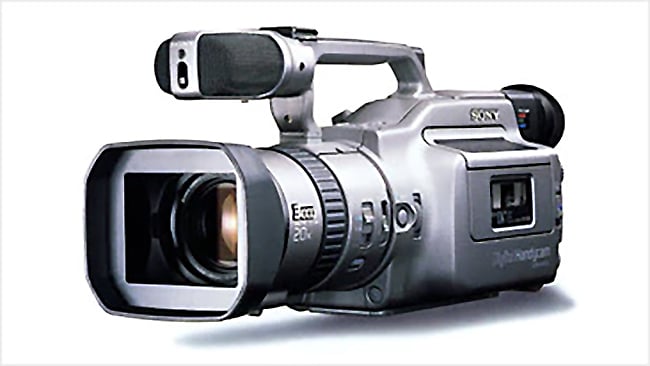 Sony's DCR-VX1000 was truly revolutionary for its time. We look back on the original DV camera and its effect on broadcasters, particularly at the BBC.

There are times in our lives, moments that we all remember, some touchstone events that stand out... There are the ones always referenced: the assassination of JFK, the death of Elvis, 9/11. Then there are others that can be much more personal, the birth of your children, the time when you met your long-time partner, you know... your eyes met across a crowded room, you smiled and then they emitted a loud buzzing noise as their side opened up and out came an impossibly sized videotape.

Yes, I jest, but really, this was a significant moment for me. I don’t mean to trivialise any of those others, but it had a profound impact on my life. The year was 1995 and Sony had released a camera so revolutionary it was about to start a change in broadcasting that can still be felt today. The camera was the DCR-VX1000, a small silver box that I first saw sitting on a desk in the BBC in White City. At the time, I was on my way to see someone about something (this detail has faded over time) and as I strode past a desk, it caught my eye.

There were only a couple of people looking at it, but it stopped me in my tracks. As someone who was obsessed by technology even then, I was intrigued. What was this thing? It looked a bit like one of Sony’s upmarket Hi-8 cameras, but no, it was different, a bit sleeker and what about that tape door with the illuminated soft-touch transport controls?…Wow. When it elegantly presented the tape, I had a look at it. At first glance, I mistook it for a DAT. Then, on closer inspection, I saw that it wasn’t, it was a brand new format...DV.

The camera was festooned with buttons, some familiar, some not so. It had a colour viewfinder. These were the days before flip-out screens. It also had a large LCD display on the back with an audio level indicator, something only usually found on much larger, more professional cameras, and a battery that was held inside the camera.

The VX1000 was going to be tested to see if it could actually be used for broadcast. There were rumours flying around that it would replace the Betacam SP and the 16mm film cameras that were in wide use at the time. There was also another camera released. Panasonic had a much smaller camera, the AG-EZ1, but it narrowly lost out to the Sony, at the BBC anyway.

There were signs of dissent, ‘toy town’ and ‘Fisher Price’ was often heard, but not put off by this and with some significant modification on the audio side, it was used to shoot ‘Soho Stories’. Just a bit of detail on this: the 3.5mm microphone socket on the side was plastic and wouldn’t hold up to professional use. That meant that various VX1000s were modded by either going directly into the mic circuit and using Lemo sockets where the onboard mic was, or just hard wiring in

This also meant that two mics could be used, not just the single one that the standard socket supported. The latter solution also involved a bespoke battery belt (a single in-camera battery only lasted about 40 minutes) and it also had mic inputs on it, and there was a single umbilical carrying power and audio into the camera. A little later some of the audio issues were solved by using a Beach Box, manufactured by Beachtech which is still going strong, although the battery life was always a problem.

On Soho Stories Director Chris Terrill used the VX1000 to shoot a groundbreaking series on the streets of Soho. A lightweight, sub-broadcast quality camera was the only way this sort of on the fly observational series could be shot. With the larger standard camera, the cost of having a crew on standby was prohibitive. With the smaller cameras and having the production team shoot and record sound, it was feasible. Yes, Hi-8 and S-VHS cameras had been used in the past but usually in limited ways, and the increase in quality over those formats was not to be sniffed at – more lines and better dropout tolerance. Even if they had wanted to shoot on the larger Digibeta format cameras, whilst these would have much better quality, they were just too large and expensive for this sort of series.

The VX1000 was not ideal, far from it, but it meant more for less. The cost savings also meant that it was feasible to purchase a networked edit system and that was used to off-line a 24 part series called Made in Manchester. I was tasked with supporting the series. Shooting on the VX1000 and editing on… Optima! Anyone remember that system? The whole thing, with five Optimas and 2x256GB of storage, was installed at Andy Sumner’s in Manchester back in the late Spring of 1997 and it was a struggle, literally. For a start, both drive enclosures were delivered in a van, laying on their backs. The van had no tail lift and deadlifting 250kg just wasn’t possible, so we had to take all the drives out first and then lift them onto a loading dock before reassembling everything.

We have come a long way. Apart from the weight, that amount of storage was expensive. How much? Well, let’s just say you could buy over 300 Petabytes of the same HD-storage for the same money today. Again, working with the system had significant challenges, but the team produced an excellent Docusoap series shot on VX1000s. This was a little different to Soho Stories as, at any one time, there were four producer/directors shooting, and some even assembling stories as well, before the editors joined the team.

The VX1000, and subsequently the whole DV format, just exploded in popularity. Many other programmes and series went on to use DV. Some thought it was only a fad, but we know now it was just the beginning.