The FeiyuTech α2000 - a well made gimbal for lower budgets 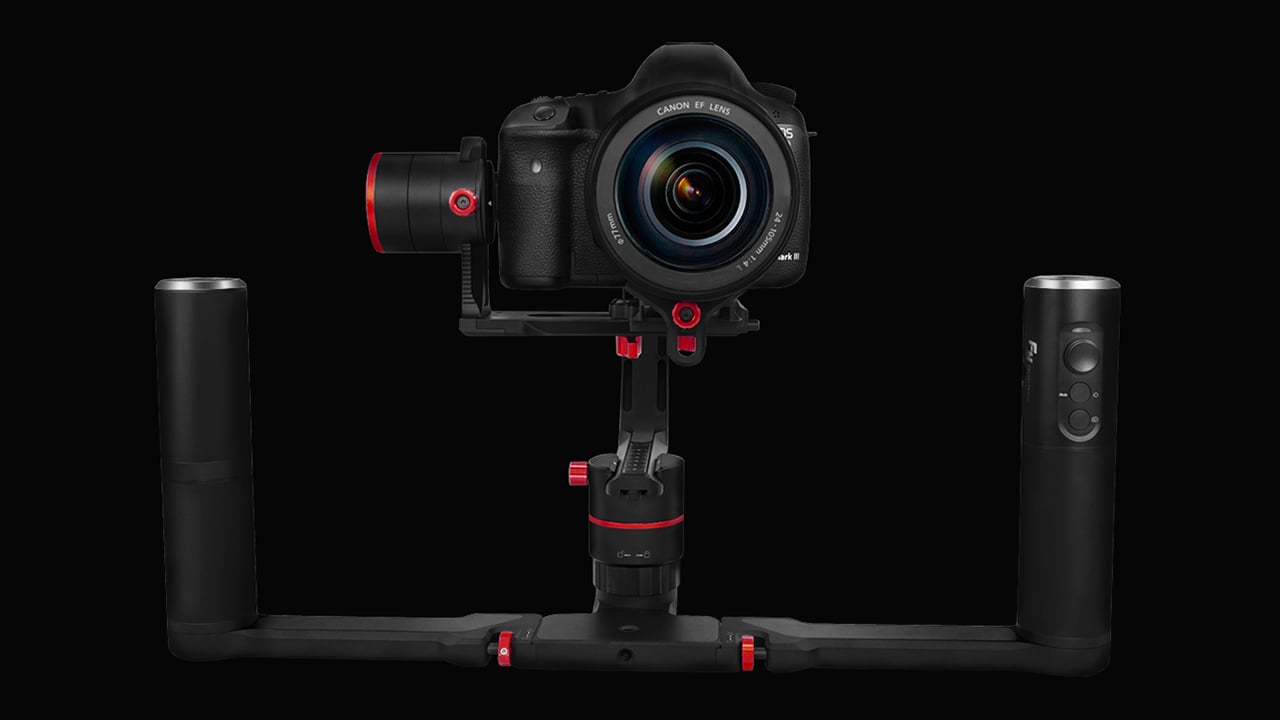 RedShark Review: Simon Wyndham takes a look at the FeiyuTech α2000 gimbal and thinks the company have a winner on their hands.

It would seem that the brushless motor is one of the best things to happen to video since the invention of the Steadicam. The motorised stabilisation system made possible what was once something that only proverbial ‘Jedi’ could do, and it became within reach of everybody. Assuming their arms and hands were strong enough to carry the weight.

Now we have gimbals for all sizes of camera, and because the market has opened up, there is also now a lot of choice as to the make and model that we can buy. Some of them can even be married to a Steadicam rig for the ultimate in stabilisation and control. More so than any portable slider, the motorised gimbal is at the top of everyones list when it comes to moving the camera around an environment in a smooth and controlled way.

One of the better known of the Chinese makes of gimbal is FeiyuTech. The company makes a wide range of gimbals, originally focusing on the action camera market. However it also now makes gimbals for slightly larger cameras such as DSLRs and mirrorless models. Which is where the subject of this review comes in, the dual handled α2000.

The α2000 is designed for, wait for it, payloads of up to 2000g of generally stills camera size. There is also a smaller version, the α1000, designed to carry smaller payloads of, surprise surprise, 1000g.

The classy styling of the FeiyuTech α2000 gimbal

The α2000 is nicely packaged up in a black zip up case with precision cut foam to house all the parts. The package comes with a large foldable gimbal frame with a handle either side for ease of holding, as well as a separate single hand grip. This means that the gimbal can be assembled for either two handed or single handed operation as and when required. The gimbal itself attaches to either of these handle sets by way of a simple locking collar interface.

Two sets of batteries are also included (although mine came with three for some reason), along with a charger than can charge two batteries at a time. Additionally a mini fold out tripod that screws into the bottom of the main frame or handle is included so that the system can be easily set down onto a flat surface between shots. Another nice aside is the included cold shoe mount for mounting accessories such as monitor supports or lights. There is also a USB cable for updating firmware with (those with new MacBook Pro's will need a USB-C adaptor), and bizarely a trigger cable for taking stills. I'm not entirely sure what the reasoning behind this was, but I guess such a stabiliser could also be useful for stills in some circumstances.

My overall impression was that the gimbal appeared, and felt, very nicely built. The motors have a nice anodised red ring around them giving an extra air of quality. Everything is machined nicely with no rough edges, and all the parts fit well together. It looks and feels like a quality device. Weighty without being overly heavy, and a manageable size.

The size that the gimbal assembly packs down to is also quite impressive, making for a highly portable system. My preliminary thoughts were that the α2000 teamed with a GH5 this could make for a very nice system indeed.

Assembly and set up 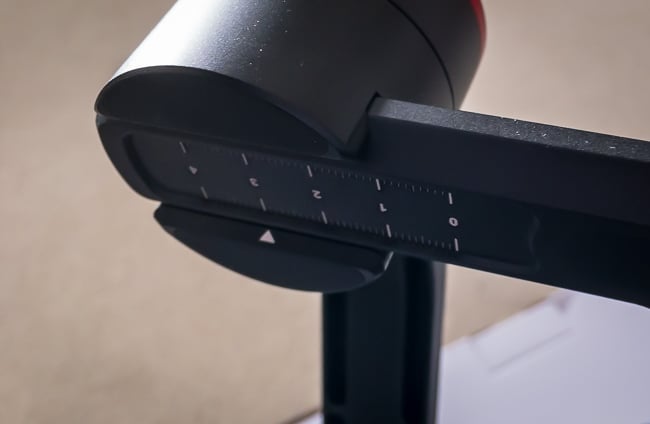 The toolless balance adjustment slider/gauges on the α2000

The thing that struck me quite quickly about the α2000 is that it is very easy to set up and configure to your requirements. On the main two handle frame, each of the handles has a screw point for mounting accessories, such as lights, monitors, or microphones. There are also mounting points on the bottom of the frame too. For instance you could use a tripod plate and set the rig up for a timelapse pan (one of its functions).

The gimbal attaches very cleanly onto the locking mount, while the batteries insert into one of the handles. FeiyuTech claim around 12hrs of use per charge, although your mileage will vary with the forces you give it and temperature. Manufacturers are always prone to exeggerate claims of duration, but in my experience it probably isn't too far off the mark, conditions varying. The two sets of batteries should see you nicely through the day with power to spare quite easily.

Balancing is fairly straightforward and quick to do, although the instructions are not as clear as they could be, so you might need to read through them a few times. Balancing is important otherwise the device will not be able to operate correctly. The only thing that can really cause an issue is lens clearance with the rotational axis. You might want to exercise somevcaution with this since the camera could fall towards this if you are not careful, resulting in possible damage to your glass.

Balancing is probably done most safely using the two-handle rig since it is much more stable on a flat surface than the single handle. Especially with the weight of the camera factored in. It is easy for things to become unwieldy during this process if you aren’t careful. But if you keep control over the gimbal orientation you shouldn’t have any problems. 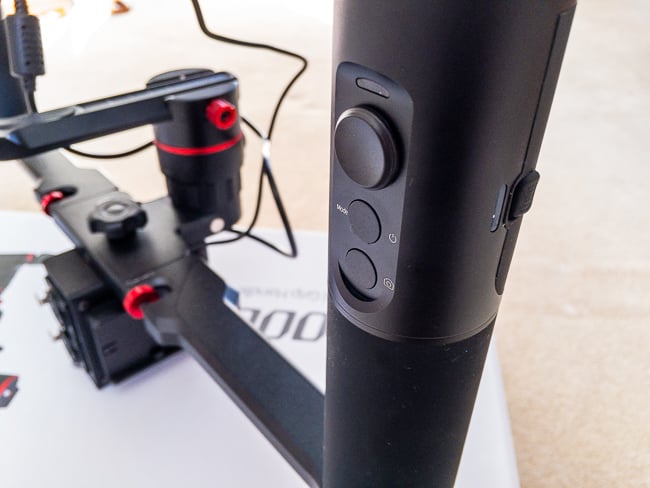 The main control handle on the α2000

A simple press of the power button kicks the gimbal into life. The rig sounds pretty silent in operation, with smooth responses to movement. The control handle can be used to pan and tilt the rig. This is pretty much an on/off affair so you can’t for instance make a smooth tilt up from the ground since the stick only produces one speed. All is not lost though. FeiyuTech make a free phone app for both iOS and Android, and a second operator can control the gimbal head from within this.

Unlike the physical control joystick, the one on the app allows smooth starts and stops. In fact the app is integral to the operation of the device since various motor speed and response settings can also be adjusted and tuned, as well as the automated pan speed set for timelapse recordings amongst other things. Firmware updates are also performed here, too. The app has a pretty intuitive interface and seems pretty solid, and it found and connected to the α2000 quickly and without fuss.

On the front of the physical control handle there is a trigger button. This is used to lock the direction of the gimbal at will, and saves you needing to change the operation mode each time you require it. A useful touch.

Weight wise the rig is pretty light and easy to manage. Long periods of shooting shouldn’t be an issue for most people with the dual handle configuration. But even using the single handle version is perfectly manageable. Although of course a lot will depend on what you attach to it. Adding lights and monitors will clearly make things much more unwieldy and heavier to carry.

With cameras such as the GH5 producing higher and higher quality footage in a smaller footprint, gimbals such as the α2000 open up a highly useful world of mobility and at £799 for the full dual handle kit it represents very good value for money. It is a straightforward if no frills system, but it will be ideal for those who really would like stabilisation but can’t afford some off the more all singing and dancing makes.

For more information about the α2000 visit the FeiyuTech website.

With thanks to H Preston for supplying the review sample.

Insta360 ONE R 1-inch Edition review: 'Action cameras don't get much better than this'

The new 85mm lens is compatible with both Sony E-mount and L-Mount variants.

It’s been in public beta, but now, finally, Atomos has released the final release firmware to enable 5.9K ProRes RAW recording from the Panasonic...

Atomos S1H Ninja V firmware released along with a...

You really, really can't believe your eyes. Here's the...