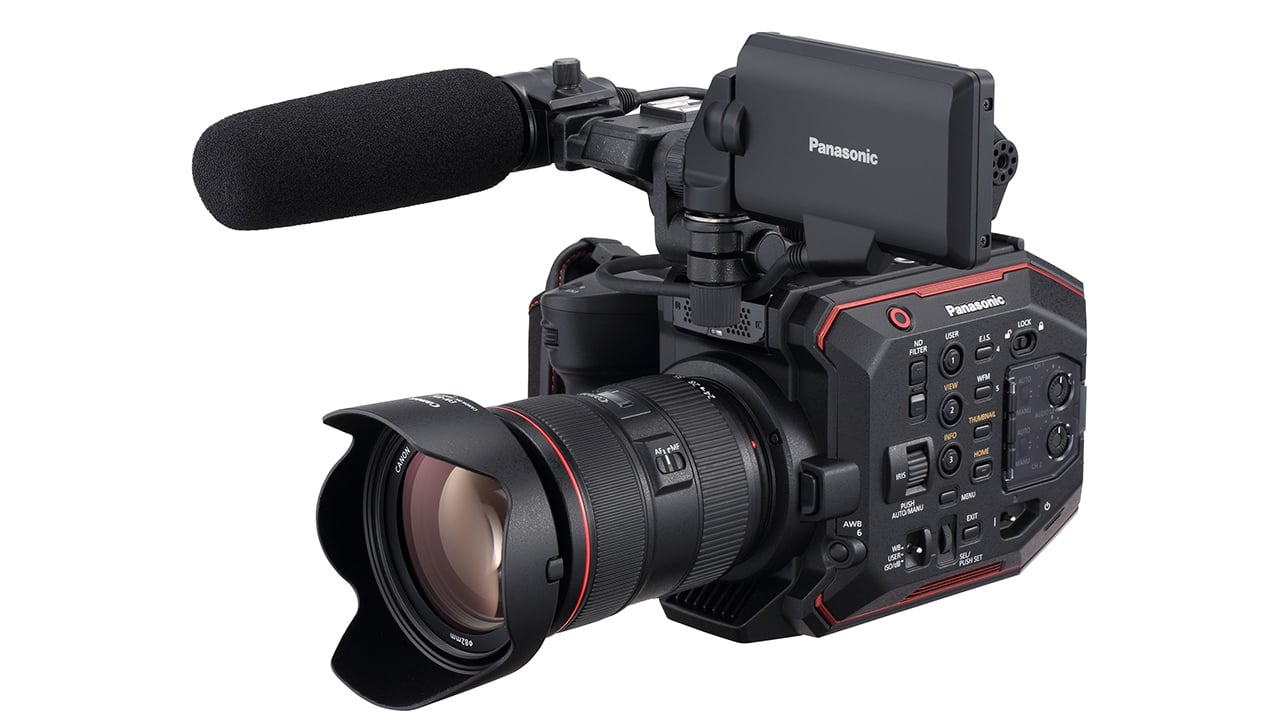 It's one of the most hotly anticipated camera releases of the year, and you can now officially get your hands on one. The Panasonic EVA1 is now being delivered.

The Panasonic EVA1 has been eagerly awaited ever since it was first announced. Essentially a mini, affordable Varicam, complete with colour matching to that camera, the physical release of the EVA1 probably couldn't have come too soon.

We had heard rumours of delays, but such talk seems to have been squashed into the ground by the official announcement today that the camera is now officially shipping.

To recap the reasons why many people (including all of us at RedShark) are looking forward to testing this new camera out, it features a 5.7K sensor, dual native ISO, 14 stops of dynamic range, along with variable frame rate capabilities and 10-bit internal recording. All within a nicely compact package. It looks to be a very versatile 'do it all' camera.

As followers of it may know, the oversampled 5.7K figure is an important one, because it allows it to produce a true 4K picture after the de-bayer process has been applied, and should ensure that maximum amount of resolution makes it to the final recording with minimal to zero issues such as aliasing.

The light weight of the body, at 1.2kg, will make it ideal for drone work, as well as being a highly portable documentary camera. The fact that it uses an EF mount instead of previous camera's MFT mounts means that it's versatility is further enhanced. Future firmware updates are also promising new capabilities such as 5.7K raw output to third party recorders, as well as 400Mb/s intraframe recording. Make no mistake, we think that the compelling features of the EVA1 will mean that it will be a very popular camera indeed.

Whilst it is true that there are other alternative cameras out there of a comparable mass and sensor size, there aren't any that have such a capable internal recording system, or features such as the dual native ISO, and such simple matching to the existing VariCam line. The suggested list price of $7475 is also a tad lower than we previously expected.

Read on for the official press release from Panasonic on the next page.

“The EVA1 has generated enormous interest since it was first announced in June,” noted Mitch Gross, PMEC Cinema Product Manager. “It is Panasonic’s first compact, handheld Super-35 camera, filling a gap between smaller cameras such as the GH5 and the DVX200 and our high- end VariCam lineup. The EVA1’s sensor is a new 5.7K design, with almost twice as many photosites as a 4K sensor, which means the 4K videos recorded in the camera will be crystal clear with rich color information. The EVA1 also inherits the unique Dual Native ISO sensor technology from our cinema VariCam line, allowing it to shoot in bright sunlight or night exteriors without compromising the image quality. And the 14 stops of Dynamic Range capture a huge scope of exposure detail.”

A key feature of the VariCam cameras, Dual Native ISO utilizes a process that allows the sensor to be read in a fundamentally different way, extracting more information without degrading the image. This results in a camera that can switch from a standard sensitivity to a high sensitivity with almost no increase in noise or other artifacts. Dual Native ISO has allowed cinematographers a greater variety of artistic choices as well as the ability to use less light on set, saving time and money. The EVA1’s Dual Native ISOs are 800 and 2,500, which will allow cinematographers to shoot in almost any lighting environment.

The EVA1's 14-stops of Dynamic Range enables fine gradation in exposure from bright to dark. The ability to capture accurate colors and rich skin tones is a must for any filmmaker. The EVA1 features full V-Log/V-Gamut capture to best utilize high dynamic range and broad colors. V-Log’s wide dynamic range and V-Gamut’s color space beyond the Rec. 2020 standard offer all the information necessary to deliver rich 4K HDR imagery.

Weighing only 2.65-lbs (1.2Kg, body-only) with a compact form factor (6.69” H x 5.31” W x 5.23” D) and a removable handgrip, the EVA1 can be used for efficient handheld shooting applications. Because of its compact form factor, it can also be mounted on a drone, gimbal rig or jib arm for complex yet smooth camera moves. There will also be numerous mounting points and Panasonic is currently working with top accessory makers to allow further customization with the EVA1.

For lensing, the camera utilizes a native EF-mount, giving shooters access to the broad EF lens ecosystem, including dozens of cinema-style prime and zoom lenses from numerous manufacturers. Electronic Image Stabilization (EIS) within the camera will counterbalance camera shake and blurring, enabling smooth movement for handheld shooting. There will also be full Iris Control, One-Push Auto Focus and Lens Data.

Behind the lens mount, an integrated ND filter wheel in 2, 4 and 6 stops allows for precise exposure control. The EVA1 also allows the IR Cut to be swung out of the path to the sensor at the push of a button. Unique photographic effects and night vision imagery are possible with this control over infrared.

The ND filter and IR Cut filter operate electronically, allowing wireless remote control from smartphones and tablets. EVA1 will have a remote-control app for a tablet (iOS, Android) that enables users to control an EVA1 when the camera is on a camera crane, or in a remote location.

On first release, available bit rates will range from as low as 8Mbps up to 150Mbps, depending on frame rate, resolution, and codec. In a future firmware update, 400Mbps recording will be added.

The EVA1 offers dual balanced XLR audio inputs with Dolby Audio encoding. The HDMI and SDI video outputs are both 4K-capable and each can be adjusted separately, allowing HD to be fed to a viewfinder or other third-party monitor while 4K is sent to an outboard recorder or monitor. The camera is also equipped with standard TimeCode functionality.

For more information about the AU-EVA1, visit the official Panasonic website.