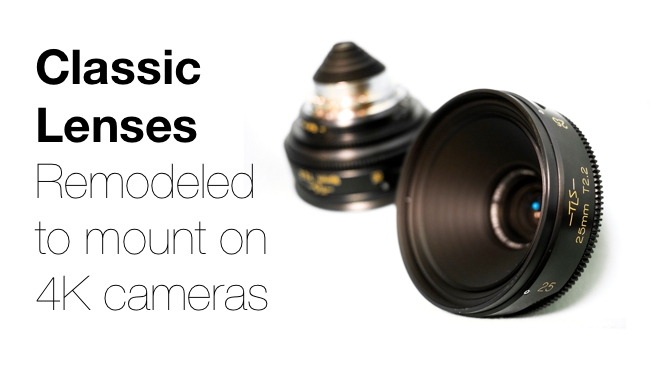 At RedShark, we love the idea that the increased resolution that 4K offers means that you can use older lenses and capture every nuance of their character - imperfections and all

It's a bit like listening to an analogue synthesiser, or playing your CDs through a valve (tube) amplifier. One of the things left behind by the digital revolution was the way analogue tape handled overloads: gently and gracefully.

Older lenses may lack the precision and clarity of their modern counterparts, but they make up for it with character, and that is exactly what the new generation of 4K cameras is able to capture, flawlessly.

Cooke, the Leicester, UK-based lens company, has been making lenses for decades, and their Speed Panchro lenses influenced film making from the 1920s all the way up to the end of the 1970. They were used to shoot the conquest of Everest and Spartacus, and any number of other classic film titles. And they're in use to the present day, in productions such as To Rome with Love (2012) and Blue Jasine (2013).

While the optics remain utterly serviceable, the mechanisms have fallen behind the times, and now look positively shabby compared to modern lens systems. What's more, they don't mate with modern cameras well, needing extensive modification to make them function to a useful degree.

And that's exactly what British lens specialist True Lens Service is now offering to do. They've re-engineered these classic lenses with a cam form focus drive, and new housing, double sided scales, and a standard 110mm front diameter to accept filters, adapters and a matte box.

True Lens says "The look and feel is now identical to a modern PL mount cinema lens: the brass, aluminium, and stainless steel construction is robust while the smooth and precise action gives users complete and smooth control over the focus and iris rings. Featuring new rings, the re-engineered units are designed to work with focus and iris motor drives, follow focus units, and remote servo drives. his allows DOPs to use the lenses with all the latest grip and accessories."

A spokesman for True Lens Services told RedShark that the Speed Panchros had an even more profound effect on film than most people imagine. For example, previous lenses were so slow that you needed a massive lighting set-up, and these lights were noisy. This made it difficult when talking movies arrived. The superior speed of the Speed Panchros meant that smaller lights could be used, and the actors could actually be heard talking!