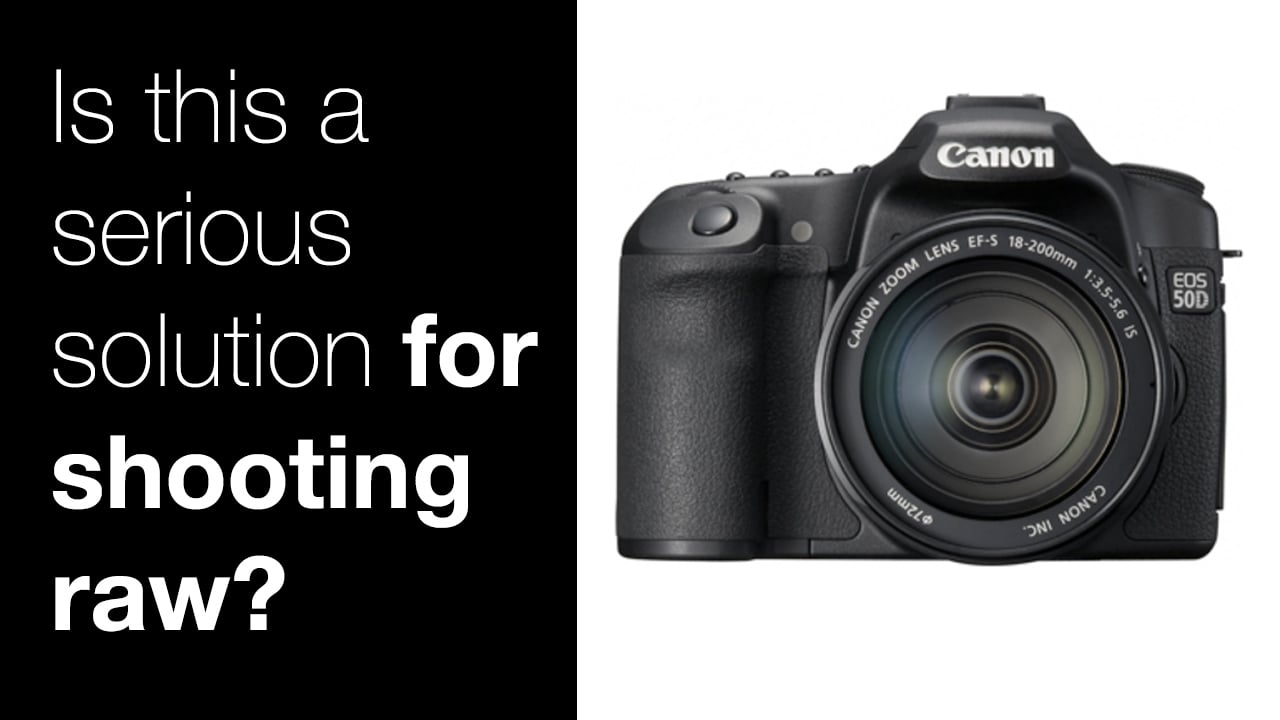 You can shoot raw with a 50D, but would you really want to?

Can you really build a useful raw video rig using nothing more than an old DSLR, a firmware hack, and a spare £200? Phil Rhodes finds out whether it is possible.

It's not clear whether the Canon EOS-50D was the first camera that isn’t a video camera to be made into one by ingenious hackers. If there's an earlier example, let us know in the comments. What's certainly true is that now this stalwart of Canon's double-digit camera range can be had for cheap, which might suggest to some people that we can now have a raw video camera for £200. That's an encouraging idea, given the huge performance of some 5-series Canon DSLRs when using the Magic Lantern third-party firmware. The high-end stuff can work very well. So, just out of interest, can we shoot raw video for the price of a used 50D?

Actually, getting Magic Lantern onto a camera is reasonably straightforward. Instead of completely replacing the manufacturer's firmware, it makes only a very small change to the firmware on the camera, enough to make it load extra software from the CompactFlash card. As such, the Magic Lantern code itself resides on a card, which limits the amount of damage it can do. Should the camera crash (and it can and will, as we'll see later) it's simply a matter of cycling the power. Switch off and swap the card for one not containing Magic Lantern (and importantly, not formatted to be bootable in the camera) and the camera will start back up in conventional Canon mode. The risk of making the small firmware modification is not zero, and there are stories of damage being done both on installation and if users choose to revert to a stock Canon firmware, not that there's much reason to, but overall the risk is low. 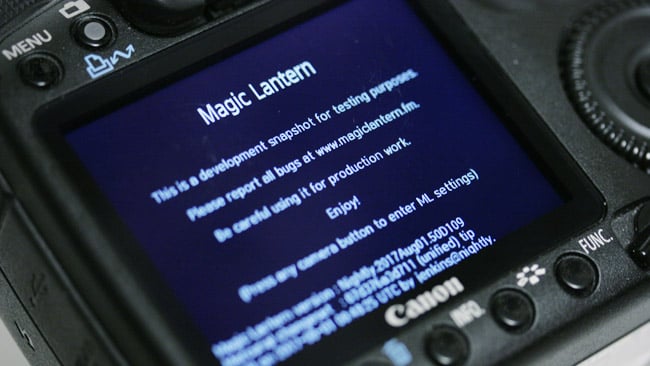 The Magic Lantern software resides on a flash card. The camera can be started conventionally simply by using a card without the software on it

There are two ways Magic Lantern will let a 50D shoot video. The first uses its onboard H.264 encoder to record in the same way as many other DSLRs. This was a dormant feature in the original 50D, which was one of the last Canon cameras not to have the ability to record its live view image but was built on broadly the same hardware as those which could. It suffers from much the same aliasing problems as many DSLRs and there's no sound, but the pictures are reasonable for an early Canon video DSLR and the system is reliable. However, what's much more interesting to most people is the raw option, which stretches everything about the camera and its storage to their absolute limits.

As one might expect, the principal limiting factor in actually shooting raw is storage bandwidth. The CompactFlash card writer in a 50D was built to handle the demands of still photography and, arguably, heavily-compressed H.264 video, via its relationship to later cameras which were video capable from the factory. Magic Lantern's compatibility charts state that the CF interface on the 5D is capable of about 70MB/second, which critically isn't quite enough to record 1080p 14-bit raw at 24 frames per second, since 1920*1080*14*24/8/1024/1024 ≈ 83. That's OK, though, since the raw image available in conventional live view modes isn't quite 1920 by 1080 — it's something like 1584 by 1058. 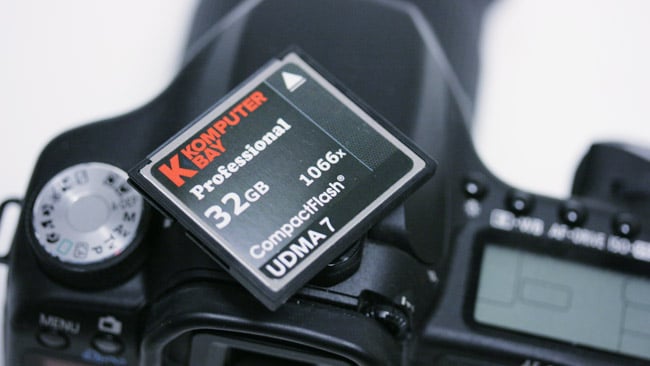 Large, fast CompactFlash cards are a necessity, although this will doubtless seem insignificantly small to anyone reading in 2021

Magic Lantern raw modes in various cameras yield various resolutions. None of these cameras read the entire sensor and then scale it to 1080p because the sensors aren't really built to do it and there isn't enough performance. Instead, they skip a certain number of pixels on the sensor (which is what causes the aliasing issues) in order to extract a viewable image from the whole sensor. The result of this, on a 50D, is a raw image of 1584 by 1058, from which is created the live view picture. Most DSLRs, at least early ones, did similar things and were never really 1080p cameras in the first place. This is why a lot of 50D Magic Lantern video on YouTube is in an aspect ratio near 2.4:1 — it keeps bandwidth under control.

The colour response is, to be kind, unconventional. It's entirely correctable, as the original camera demonstrates, but straight out of the camera we're seeing the untamed response of the dyes on the sensor. 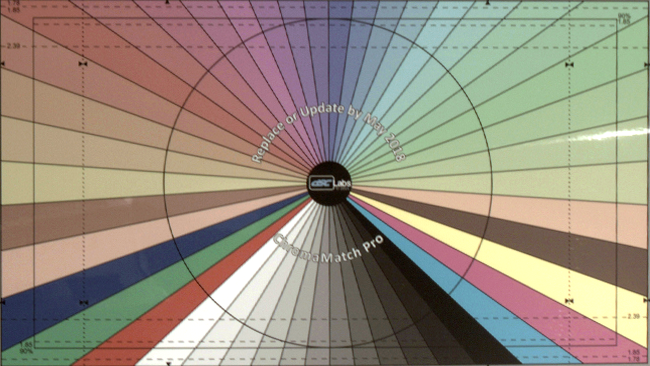 DSC Labs'chart makes the low contrast, low saturation results clear, approximating a log look out of the camera. This represents the raw data processed with a gamma around 2.2 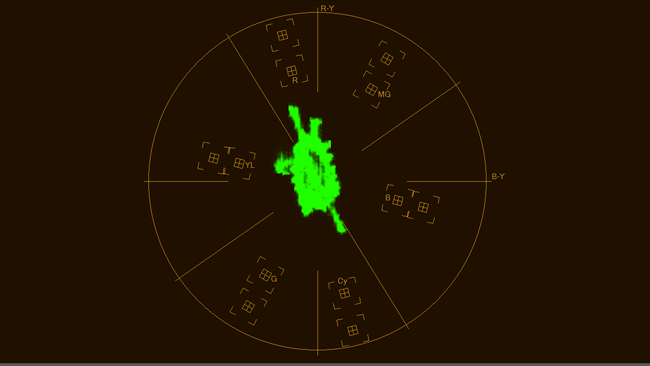 Vectorscope lacks response due to the low saturation, though that's fixable. A broadcast video engineer would go to town on the magenta and blue

It is actually possible to make a 50D record a 1080p raw image — actually, a 2000 by 1080 image, at least until the buffers overflow and it drops frames. This is what happens when we use what would be the 1:1 zoom mode, as we would in live view to check critical focus. The results are quite nice, but there are a couple of problems. The first is the resulting effective sensor size, which is somewhere around super-8mm and would require shorter focal length lenses than are common to be effective for anything other than super telephoto shots. The second is viewing; the default Canon viewfinder modes are not suitable for raw recording in 1:1 mode and the Magic Lantern project has gone to some lengths to write code for an approximate, black-and-white image display which is slow and laggy.

The poor little ARM processor in the camera is not really intended to touch image data — it isn't nearly fast enough and that sort of work is usually done by other parts of the integrated system that Canon calls DIGIC. Magic Lantern's viewfinder also seems buggy, since it doesn't really show the same image area as will actually appear in the recording. The 1:1 modes on the 50D are, at present, not very usable. For the record, I asked about this on Magic Lantern's forum but as with so many volunteer projects, support can be hard to come by. 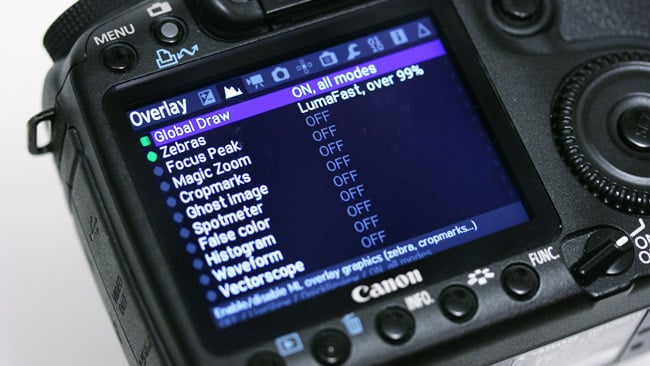 While it's most famous for the raw video capability, Magic Lantern does a lot more things besides

It would be easy to decry the whole thing and declare it a waste of time, but that's unduly harsh. There's something undeniably nice about raw images and the pictures that come out of Magic Lantern-equipped Canon DSLRs have that niceness. We're indebted here to Thomas Worth of Rarevision in Los Angeles, mainly known as the company behind the entertaining VHS Camcorder application, but also creators of the 5DtoRGB transcoder for DSLR-originated H.264 files and RAWMagic, which converts Magic Lantern's raw files to DNG stills sequences for use in software such as Resolve. With all this very specific knowledge of how things work, Thomas was able to help out by creating a tool capable of transcoding Magic Lantern's MLV files directly into ProRes QuickTimes. Before this, there weren't many ways of doing that on Windows.

Given this, we can achieve correct-looking ProRes output that can be scaled to 1080p with vastly better results than shooting H.264 in-camera. Mosaic Engineering promotes an anti-aliasing filter for the 50D, which ought to improve things further, although they didn't respond to hails when asked about it a couple of weeks ago. Still, whether a 50D is ultimately worthwhile as a super-cheap raw camera is another matter. Other Canon DSLRs, particularly the 5D Mk. III, are entirely usable shooting machines raw video, although the 50D can certainly be pressed into service and it's better than any H.264 option. Magic Lantern has other useful capabilities, too — an intervalometer for shooting time lapses, a rather approximate waveform monitor, and most importantly Arkanoid, a clone of the game Breakout, so it's well worth a look even for stills photographers and time-lapse people. And Breakout fans.