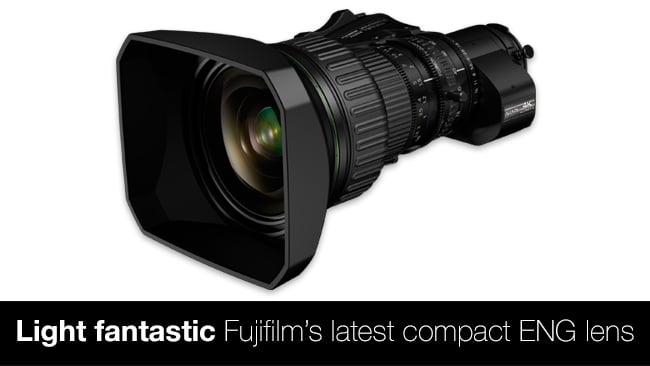 An ENG lens for a new generation. Fujifilm's new B4 broadcast lens promises to deliver both performance and light weight to suit the latest generation of 4K camcorders.

In the notation of broadcast lenses, Fujifilm's new 24x7.8 lens goes all the way from 7.8 to 187mm. If that sounds like a lot, you're right, it is a lot, especially taking into account the doubler which extends things to 374mm. This is why people still like to shoot small-chip cameras: because we can have fast lenses which cover an enormous range of focal lengths without being the size and weight of a section of trans-continental oil pipeline.

That's the case with most lenses built for 2/3” cameras, at least in comparison with lenses of similar layout for super-35mm cameras. However, it's particularly true of the new Fujinon UA24x7.8 which is only a hair over eight and a half inches long and weighs just under two kilos. This matters not only in terms of traditional ENG cameras, but also on things like an Ursa Mini Pro or FS7, both of which can be used with this type of lens via adaptation. In fact, even some modern ENG cameras are becoming very lightweight, lacking the tape decks of old, so a lens that's either heavy, long, or both will tend to make them very nose heavy. A nose heavy camera requires the operator to constantly push his or her right hand upward, which is far from ideal over a long day. OK, you can stack batteries on the back, but it's far better to have a lens that's lightweight and compact.

With these specifications, the 24x7.8 competes fairly directly with something like the Canon HJ24ex7.5, which was introduced in 2015, but for that preceding U. The UA series is promoted as being suitable for 4K production and includes both handheld broadcast lenses and big-box types for studio cameras. It's difficult to make lenses of this capability at this size and weight to begin with, so making lenses to land a genuinely UHD-worthy image on the tiny sensor of a 2/3” UHD camera, with its incredibly tight pixel pitch, is a huge engineering challenge. Fujifilm themselves divide the top end of the UA range into their Premier series, for higher-end work; the UA24x7.8 is not a member of this higher-end range, but is nonetheless described as being suitable for 4K work. What this really means can only be determined by hands-on testing, and it's normal for ENG zooms to show changes in performance between moderate and the most extreme settings (maximum aperture, maximum focal length, extender engaged, etc.)

This isn't necessarily a choice for the dedicated ENG crowd-surfer. Fujifilm have shorter focal length options for that sort of thing. In almost any other scenario, it'll be great, and the push towards better glass is great; even on non-4K productions lenses like this help close the performance gap between cinema and broadcast options, which is great not only for ENG and documentary people but also for people shooting drama on lenses like this. As with many modern lenses there are proprietary coating techniques at play, and the electronics are advanced, with the option to output encoded zoom and focus settings for virtual set work. What we don't know is how much it'll cost when it's released in January next year, though we can safely assume that something this size, with these numbers attached to it, will not be priced to appeal to the entry level filmmaker.

Press release follows on the next page.

FUJIFILM Corporation (President: Kenji Sukeno) announced the release of the new FUJINON UA24x7.8BERD (UA24x7.8) achieving the world's smallest (total length approx. 220.5mm) and lightest (approx. 1.98kg) broadcast lens supporting 4K. The lens is scheduled for release in January 2018. Despite having a compact body, the UA24x7.8 features a 24x high magnification zoom, covering a focal length from the wide angle of 7.8mm to 187mm. This portable zoom lens exhibits both high mobility as well as operability. This lens allows you to shoot high-definition, realistic videos for situations such as live sport broadcasting and press coverage.

The addition of this product expands Fujifilm's 4K broadcast lens line-up to 8 models in total, catering to the various needs for 4K video production.

The UA24x7.8 will be exhibited at IBC2017, the International Broadcasting Convention to be held in Amsterdam in September, along with the full range of Fujinon Ultra HD 4K broadcast lenses, the range of high-end PL-Mount cinema lenses, and the new MK Series of Cine lenses aimed at independent and emerging film-makers.

4K video is spreading rapidly in countries such as Japan, Europe, and North America, for situations such as live sport broadcasting, press coverage, and studio shooting. In addition, with the rapid expansion of OTT (“Over the Top”, online content distribution) 4K video can now be enjoyed even on PCs and tablet devices, increasing opportunities for filming 4K video in a wide range of scenes. In recent years, with the introduction of the compact and lightweight 4K camcorder, the need for compact and lightweight lenses continues to increase more and more while productions utilizing the high mobility of such equipment spread.

Looking at the popularization of 4K video, Fujifilm became a pioneer in the global industry with the release of a 4K compatible broadcasting lens in 2015. Furthermore, Fujifilm also began the sales of two compact and lightweight portable zoom lenses for broadcasting in June of this year. Fujifilm continues to contribute to the market expansion of 4K broadcasting by expanding their lens line-up.

The new UA24x7.8 is a 4K compatible portable zoom lens that achieves the world's smallest and lightest specs for its type. With a total length of approx. 220.5mm and a total weight of approx. 1.98kg, it reduces the burden when filming with a camera on one's shoulder and shows its power when combined with a 4K camcorder. It features a 24x high magnification zoom covering a focal length from 7.8mm to 187mm making it is capable of capturing a wide variety of different scenes. This lens is capable of shooting realistic videos with a focus on the subject, and is perfectly suited for live sport broadcasting or press coverage productions which require high mobility.

In addition, by thoroughly reducing chromatic aberrations, which are a common occurrence in telephoto zooms, it is also possible to shoot utilizing HDR (High Dynamic Range). It is possible to reproduce rich tones even when shooting scenes with intense contrast, such as stadiums at dusk.

FUJINON lenses by Fujifilm are known for high quality eloquent images, and have been used in various production sites including movies, TV commercials and live sports broadcasts around the world. Fujifilm will continue to tap into its optical, high precision forming and assembling technologies that have been nurtured over many years in the industry, to further expand and enhance its 4K lens line-up, thereby addressing the diversifying needs of production sites.

(3) Advanced optical performance with 4K compatibility across the zoom range

(4) Achieving natural bokeh with the adoption of nine aperture blades