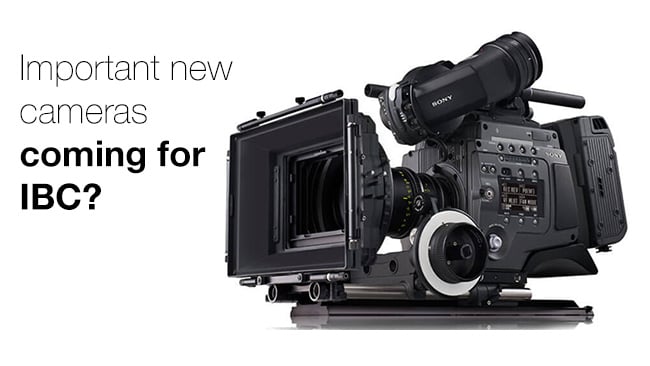 It's that time of year again, with the excitement already brewing, and rumours flying. However we do know that at least two manufacturers are likely to announce significant new cameras in about two weeks time, at Amsterdam's IBC show in September.

I’m going to start by saying that I have no privileged information on anything I’m about to write about. This is pure guesswork based on what is in the public domain for everyone to see.

First of all: Sony is about to release its new CineAlta camera. The Japanese camera company  tends to reserve the CineAlta appellation for its cinematic cameras. Mostly, this means cameras with S-35 sensors and bigger.

Here’s everything we know about it so far.

You can see that it’s going to have a Full Frame sensor (36mm x 24 mm) and it will be compatible with Sony’s 16 bit RAW/X-OCN and XAVC workflows.

Sony’s rationale for the Full Frame form factor is that it shares many of the desirable aspects of 65mm, without the need for big, heavy lenses.

It’s hard to say at this stage whether this is going to be a flagship camera, right at the top of Sony’s tree,  like the “Formula-1” device in comparison to all its other cameras - or whether it’s going to be the first of a new family of cameras that might have siblings below and above it in the family tree.

It’s tempting to think that it might have an 8K sensor, although for many, the sheer size of the sensor will be tempting, even if its output is restricted to 4K.

Personally, if I had to guess, I would say that there’s a decent possibility that this new camera will have an 8K native sensor, but this is by no means inevitable. Apparently the sensor was designed specifically for this camera. Sensors are very expensive to create and manufacture and there won’t be an economy of scale - so one wonders if this will be a design that can be easily repurposed for other cameras and devices.

8K would be cool, but any resolution between that and 4K would mean that a picture downscaled from a Full Frame sensor would stand a very good chance of being awesome.

And then there’s ARRI.

All I know about this one is that it’s the Munich-based company’s 100th birthday this year. Think about it: a 100 year-old digital camera company!

What better time would it be for them to announce a completely new camera?

If it did, then what would it be? 8K? I’d say “unlikely” given that their currently on sale product range doesn’t even reach 4K, except by upscaling (very successfully, most would agree).

Will it be a version of their 65mm camera that you can actually buy? If it were, it would be extremely niche, not least because of the size and expense of the lenses you’d need.

I’m more inclined to think it might be something like a 6K camera that can downsample to give outstanding 4K.

The main issue for me with guessing what ARRI might do is that their existing sensor technology is getting very old, but still - of course - produces images as good as it ever has.

Where does the company go from here? Who knows? But one thing is pretty certain: if ARRI comes up with a brand new sensor, that will probably be bigger news than any new camera in itself.

Well, in terms of concrete information, absolutely not. Most of the other stuff we’ve been hearing has the status of “wishful thinking” rather than informed guesswork. One consistent meme is the idea of Blackmagic producing an updated (presumably 4K) version of their popular pocket cinema camera. Again, we have seen and heard nothing to substantiate this.

Back in the land of reality, IBC 2017 will be the first time most people will have seen a real Panasonic EVA-1, and we’ve been hearing reports of fantastic results from Canon’s C200, too.

Which reminds me: at least two years ago, Canon announced that it was working on an 8K camera.

There’s no reason to think that this will be announced at IBC but no reason to think that it won’t be, either. I don’t think it will for the simple reason that 8K creates so much data that without a fully-evolved workflow, it will be nearly impossible to manage. RED has shown that 8K is manageable, but the Irvine-based camera company has a complete ecosystem, including its own codec.

Let me know your thoughts in the comments below.