A box with a lens: high level photography with low level equipment 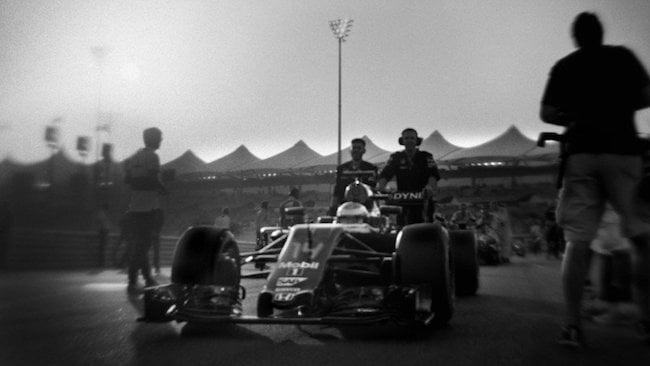 Fernando Alonso's McLaren being pushed is, sadly, not rare, but at least this time it is to the grid

Joshua Paul's photos of Formula One marry cutting edge race technology with a camera that was made before World War I broke out.

We've often talked about how it's possible to do very good work without the latest equipment. Much of the photography that's held in the highest regard was produced decades ago, long before today's latest toys were even dreamed of, so clearly, older gear can be very capable. Someone who's been testing the limits of this supposition is Joshua Paul, a New York-based photographer who's made both an art and a science out of shooting Formula One racing on a four-by-five view camera (which is fairly normal behaviour) from 1913 (which probably isn't.)

We should be fair. The most advanced technology in a photochemical camera system is the film and the processing techniques that support it, and although Paul largely seems to shoot in monochrome, he's inevitably still using stock and chemistry of modern formulation. Otherwise, a camera is just a lightproof box with a lens in the front, and it's that lens which is the principal limiting factor on the resulting images. Lens technology, too, has improved out of all recognition since 1913, with the result that Paul's images could charitably be called “rustic,” or perhaps “fuzzy,” but certainly have a certain lo-fi charm. The lens on the Graflex camera involved is certainly capable, under ideal conditions, of creating images that look sharp and modern on the web. Most of the time the conditions appear to be less than ideal, and there's an enormous degree of glow and flare, particularly in out-of-focus areas, but to a great extent people aren't using this sort of gear because they're after particularly modern-looking images.

Graflex were neighbours of Kodak in Rochester, New York, and went on to create the famous Speed Graphic camera. The Speed Graphic was essentially the classic press photographer's camera of the twentieth century and was manufactured in various marks from around the time of the Edwardian device we've been discussing, right up until the early 70s. As with many bellows cameras, special techniques are possible by moving the lens around, creating a plane of focus that's inclined in one or both directions, vignetting, and other artefacts. That sort of very analogue style is greatly sought-after in the modern world of digital acquisition and the popularity of Paul's work is possibly, at some level, rooted in that feeling.

Possibly, one day, someone will make a little bellows mount for movie cameras (perhaps for those with very shallow mounts) and we'll be able to have some of those effects for ourselves. Even then, though, we're not likely to get quite the same very particular combination of characteristics that makes Paul's images so popular. Formula One racing was, apparently, an accidental subject, but the glorious anachronism with respect to the camera technology seems to be a big part of the fun.