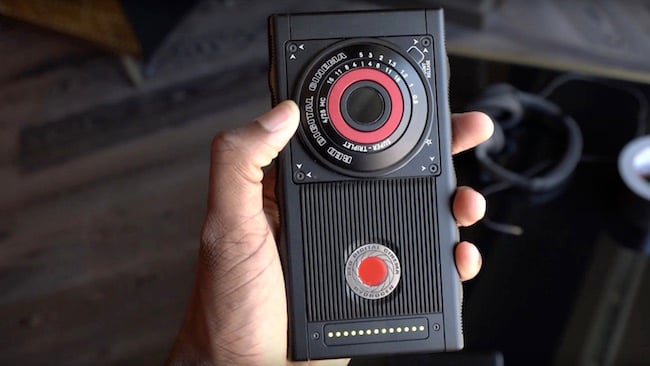 The RED Hydrogen: one thing we can say about it, it's not small

US tech vlogger Marques Brownlee has been the first person to get his hands on a RED Hydrogen and while the video he's uploaded about it doesn't add too much to our knowledge about the unit, it definitely fills in some gaps. [Update: as does a very impressed Facebook post from Vincent Laforet.]

Here are our initial impressions from Marques' video, which you can watch below.

1) It's a big unit. The first prototype shown is a non-working mock up of the final form factor. It wins plenty of admiration for taking RED's usual industrial design aesthetic into a handheld device arena, but you are still going to need some pretty big hands to hold it. "About the same size as an iPhone 7 Plus — with a case on it," says Brownlee. In other words, it's a two-handed device for most people.

2) The set of pins at the bottom of the back hints at a significant, magnetic snap-on mod ecosystem in the works.

3) You're not going to see the holographic display just yet, just a video of Brownlee watching it on a second prototype. He says he's impressed.

4) A third prototype shows a sensor and a lens mount; all part of a camera system that Jim Jannard reckons will only be surpassed by a full-blown RED camera itself.

5) The next stage is to integrate all this into one unit. That should happen in the next month to month and a half, at which time another integrated prototype will probably be featured somewhere.

The video is below. In the meantime though, photographer and DP Vincent Laforet had a demo centring on the holographic capabilities of the unit, and to say he's impressed would be an understatement.

"It's rare to be exposed to a technology that makes you want to go out and shoot everything you've ever seen, shot, or have seen others shoot - ALL OVER AGAIN," he wrote on Facebook. "Because not only will your experience in shooting it be what you've always dreamed of in terms of ease (basically with a cell phone sized capture device) ... but more importantly: You know that your audience will experience what you see in a way they never have before."

"If I had to pick one word: IMMERSIVE. Mind bendingly-so. It puts the traditional 3D experience and AR/VR goggles to shame. And I just held the device in the palm of my hand and didn't have to wear anything ... there's a new level of intimacy that hasn't been there before.

"Your mind knows that what you're seeing with your eyes on the screen isn't there ... yet it has zero qualms about completely believing it's there... and simply put: that's something I've never experienced until today in terms of displays / goggles etc."

He also talked in glowing terms about the audio experience

"Holy hell ... I honestly could NOT tell the difference between what was really in the room and what wasn't ... and that was with a standard Bose headset. It was unnerving to have one's senses could so convincingly completely be fooled ... immersive audio technology is a big part of Hydrogen."

It's all getting a bit interesting. On with the video...