360 video: is it just another way of oversampling? 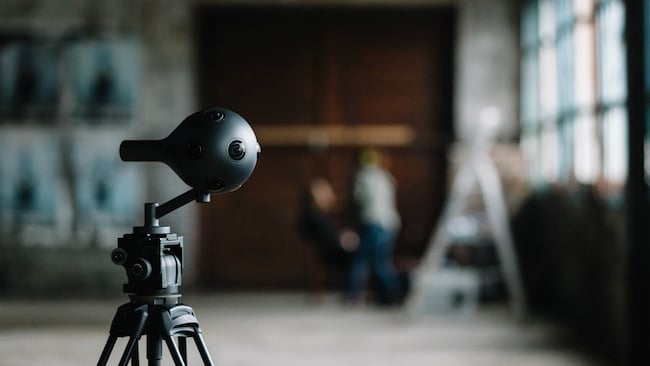 Should we be using cameras like the Nokia Ozo on 'normal' shoots?

360 video is either the future or a bubble in all senses of the word, depending on who you talk to. Is there a chance though that it’s just another capture mode that leads to improved 2D images?

The words “Let’s fix it in post” would send shivers down many a cameraman and editors spine. Yet increasingly the idea of fixing stuff later has in fact become part of everyday workflow. We shoot using Log transfer functions to capture greater dynamic range off the sensor to be crammed into traditional video signal bandwidth. We still ensure we expose correctly so that we do not clip any information, but the intention is that we can make most of the creative decisions about the final look later on. We’ll conveniently forget about the current disturbing trend for some producers to think that the bare Log recording is the final look for a moment!

When 4K first arrived, people were often using the excess resolution to allow the freedom to crop the picture for 1080p output. Particularly useful if you are recording an interview with one camera. Personally I am not a fan of doing it, but for some people it is their creative decision. I have a strong feeling that 8K will be used in a similar way for 4K outputs.

Which leads me nicely onto 360 video. It can be called a fad if you like, or a gimmick. But the real question that we need to ask ourselves is whether the purpose of 360 cameras should be to record a “VR Experience” in the first place? My feeling is no, they shouldn’t. Watching a VR video is a right royal pain in the rear end, to be frank. Many attempts have been made to give immersive experiences, be it Facebook adverts, or even attempts at action dramas. They all fail abysmally because wherever you point your virtual head, you can guarantee that you’ll miss some important crux moment!

360 cameras are currently, mostly, fairly low resolution relative to their final picture output. But this will change, assuming manufacturers sell enough of them. In fact 360 cameras are probably where really high resolution sensors such as 8K or even 16K can come in truly handy, and be creatively useful.

Let’s say you want to capture an action experience. Whether that is mounted on or inside a rally car, or on the head or handlebars of a mountain bike. Or even on an underwater dive with sharks. A very high resolution 360 degree camera could be very useful indeed.

Forget actually outputting the video as a free roaming VR view. Instead, think of the 360 degree camera as capturing an infinite amount of angles at once. Instead of using the camera for VR, it would be much more useful for the editor to frame shots in post, and then cut between them as per a traditional video.

See that shark that just swam past? You could have missed the follow pan with a traditional camera. But with 360, you can frame the camera pan in editing. Not only that, but because you have a full 360 view, the pan can be made absolutely rock steady. The same goes for the view of a mountain bike. Stabilising the shot perfectly should be very easy indeed because of the field of view on offer, and it would not require a reduction in viewable resolution to do so.

A mountain bike mount would offer everything from shots of the pedals going round, the facial expression of the rider, front handlebar views, side views (you could track a pan of a fellow rider as the camera went past). There are all manner of creative opportunities.

So, with 360 video, we have available to us the ability to perform pans and tilts in post, stabilisation, and the ability to frame and cut between angles at will. All decided during editing. A setup that would normally take several cameras mounted on a person or vehicle, could now be done with one. However it would require that the 360 camera recorded very high resolutions with good noise performance to make this truly happen. Extra processing such as fisheye reduction would also need to be carried out. But because you have picture information from all manner of angles, this should mean that the composition you frame could remain as you want it, without cropping as per a traditional lens correction.

Whilst the camera companies would like to push the VR aspect, I feel that it is creative use in more traditional video where such cameras will find their true creative potential. “Fix it in post” has never felt a good thing to say. But technology is beginning to make it a potentially legitimate tactic!