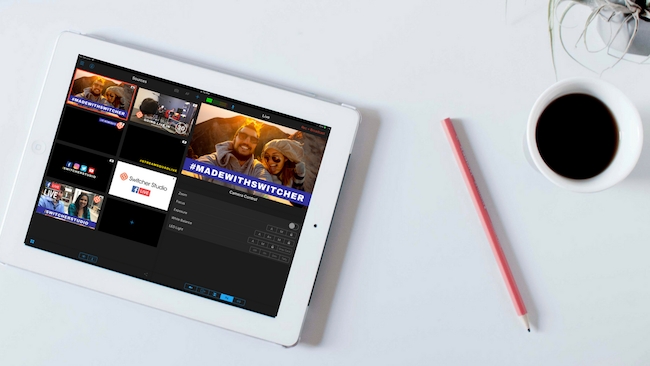 Switcher has unveiled some fairly impressive updates to its semi-eponymous video platform with the launch of Switcher Studio v3.3.

Switcher Studio has, of course, been designed from the ground up to operate as mobile multi-camera video software for iPhones and iPads, and v3.3 adds some intriguing and powerful new characteristics.

Given that it is aimed at creators working in the YouTube/Facebook Live space, social media tools figure quite highly and the new ability of in-app Facebook Live comment monitoring is going to be a useful one. Facebook passed two billion active monthly users this week, so there’s potentially a lot of comments to monitor too, and not having to switch to a second device to do so is a much-needed workflow tweak.

Up to nine cameras can now be synced at once, up from four, and there’s a sort of tally in that remote cameras also show a tag to indicate the number associated with the camera source. There is also a brand new interface with an intuitive new design for quickly and easily adding photos, pre-recorded videos and overlays to live and pre-recorded videos.

A multi-use Preview window allows users to usefully adjust camera controls, such as white balance and exposure, before switching to a camera source. Multi-view or side-by-side effects can be built and then pushed to the live broadcast. And users can also pair the software with the DJI Osmo Mobile gimbal for remote pan-tilt-zoom control of a remote iPhone camera.

And if you want to see the sort of thing that can be produced with such a set up when you try, Switcher’s also highlighting an interesting case study from France where Samsa.fr used its software, alongside French start-up Dazzl’s, to produce four-hours of live coverage of the la Fête de la Musique event. Have a look here.