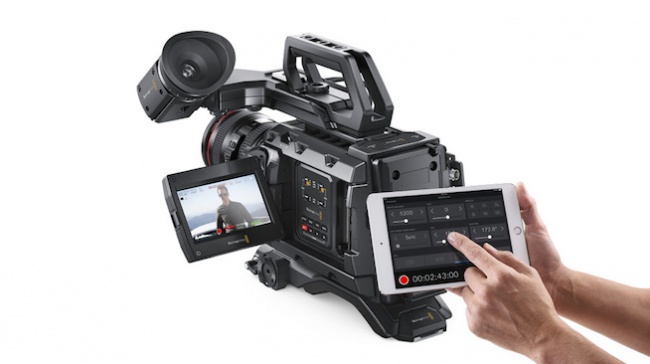 Controlling it from this range isn't really the idea, but you get the point...

Ships is probably the wrong word for an app, but, after announcing it at NAB, Blackmagic Design’s iPad control app for the URSA Mini Pro is now available in the Apple app store.

All URSA Mini Pro cameras feature built-in Bluetooth connectivity, a move which you’d have to hope is now going to be standard for future models or iterations given the ever-shrinking footprint of Bluetooth modules. This, says the company, enables users to send and receive commands from up to 30 feet away, though as anyone who uses Bluetooth regularly at home for speakers, remote controls or whatever, 10 metres represents fairly ideal conditions.

Anyway, once the camera is paired with the iPad, customers can remotely power it on or off, change all major settings, adjust and add metadata using a digital slate and trigger recording. This is going to be undeniably useful if the URSA Mini Pro is stuck up a crane, in a barn, or in an underwater housing. Or just if it’s locked off and you don’t want to touch it

The free API that the app is built on and some sample code will be available later this summer so that other developers can take a crack at building applications for the URSA Mini Pro. We have to admit to being quite interested to see what might be coming down the pipe on this score, especially when people start driving the unit’s built-in DaVinci Resolve colour corrector.

The Camera 4.4 update also has a few other tricks up its sleeve, including adding new preset timecode options on URSA Mini Pro cameras. It also adds compatibility with Canon 18-80mm T4.4 for iris, focus and record trigger, along with improved EF, PL and B4 support, improved digital slate functionality and improved zebra stripe overlays on URSA Mini 4K cameras. Download available on the Blackmagic site.

No word yet on an Android version. We'll keep you posted.