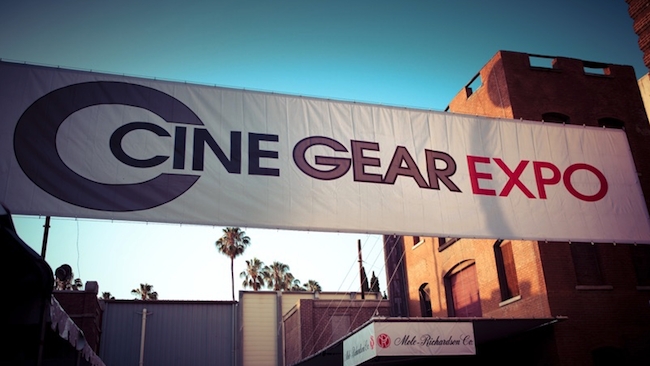 21 years old and getting better with each passing year...

I’m on the plane back from Cinegear, the video and cinematography show based on Paramount’s Studio lot in Hollywood. In three words: it was great.

I hadn’t been before but after RED’s decision to ditch NAB and exhibit instead at Cinegear, it seemed like we should go this year, even though it’s so soon after NAB, and even though I live in the UK, it seemed worth taking the RedShark team over to the West Coast again.

And I’m so glad that we did. The show, this year, in my view, was phenomenal.

Quite obviously there’s a completely different vibe to NAB. The Vegas show will always be important. It’s unique and it’s a pivotal part of the calendar. But it’s a mixed bag. While you still find cameras, lighting, tripods, batteries and all manner of good stuff, it’s intermixed with satellite gear, radio aerials and things that make you have to walk further to find what you really want to see. And you always have to allow twenty minutes between meetings because the place is so big.

In comparison, while Cinegear has reached the point where while it’s not exactly small, it is at least concentrated. Everything that’s there is worth a look. It’s all relevant.

And what a venue!

If you’ve never been, it’s a revelation. The show is hosted on Paramount’s studio lot, which is a very big area. There’s a large number of stages and then there’s the New York street scene - a collection of streets and buildings that resemble areas of New York. These are real buildings - they’re not cardboard cutouts or temporary in any way.

And in the meandering faux New York streets you’ll find a rich helping of booths and stalls, all competing for your attention. Lenses, filters, tripods, wireless video devices, storage, VR, 360-degree video — all out in the sun. Apparently, it wasn’t as hot this year as last. It was lovely, in fact - beautiful weather without being uncomfortably hot.

You still needed a sun hat to avoid being toasted, and massive thanks to Teradek for giving out wide-brimmed sunhats to virtually everyone that wanted one.

Inside the stages, it was more like a conventional show, with the added benefit that it was air conditioned. RED had its own stage and was packed from the start of the exhibition. I’m guessing they’re pleased with their decision to switch from NAB. They also had what by any measure was a simply awesome party at the RED Studio. This, if you’ve never seen it, is a complete, working studio. It’s been RED’s since about 2010, I believe, and it’s probably the best party venue I’ve ever seen. Jetlag meant that I didn’t make it until the end but I’m told there were fireworks.

Cinegear’s importance in the calendar was boosted by Sony’s decision to pre-announce a new Full Frame cinematography camera with a completely new generation of sensor and supporting technology, and by Panasonic’s launch of the EVA1 camera. We suspect that Canon’s launch of their C200 was influenced by the timing of Cinegear, too.

We were so impressed by Cinegear that we’re going to book our hotels for next year straight away. If you’re thinking of going you might want to do the same. A couple of tips if you do go next year:

We hope to see you there next year.