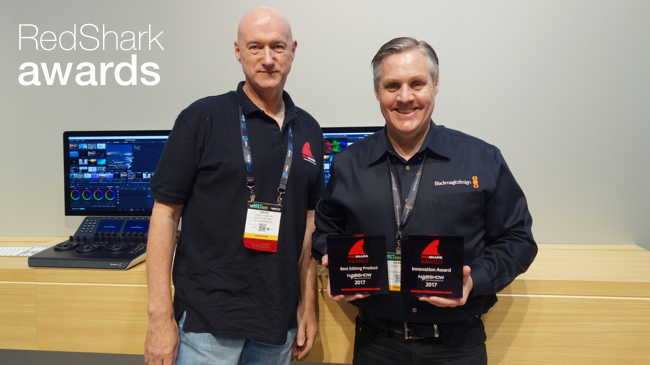 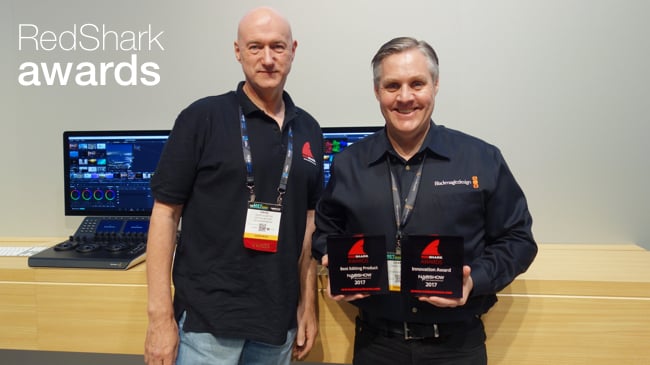 Here are the winners of the RedShark awards for NAB 2017. Before we dive into the results, I’d like to thank everyone who wrote to us to nominate their products. Not everyone can win because there’s a finite number of awards, and to win one calls for something exceptional. And these winners are all exceptional.

Our RedShark team trawled through NAB to find potential winners. This was not a perfect process - there was absolutely no chance that we would get round to everybody, so it’s important to say that our system is not flawless. There may be potential winners out there that we have missed and to anyone who thinks they might have been overlooked, the message is simply to tell us. Tell us now to look out for you next time and then tell us again when we announce the next awards which will be in September at IBC2017 in Amsterdam.

As ever, if you’re writing to us about awards, the address is awards@redsharknews.com.

Finally, I just want to remind everyone that we don’t ask anyone to pay for their award. Incredibly this is still a common industry practice. We feel it’s better that we don’t charge at all. It seems fairer and more transparent.

Stay tuned for the results:

This goes to Blackmagic for turning DaVinci Resolve into a powerful digital audio workstation. Not in the sense that it’s intended to compete with ProTools but because it has the potential to avoid that awkward “round-tripping” between the separate video and audio workstations. The sheer speed with which this has been turned into a working (albeit advanced Beta) product is staggering and while the full potential of Resolve-with-Fairlight remains to be unexplored, this daring move deserves to be rewarded.

The Unreal Engine from Epic Games

What’s this? A gaming company at NAB? Winning an award?

For some time now, Epic Games has had its eye on the film production market. Games engines are now incredibly powerful and capable of creating authentic-looking 3D worlds in real time. Unreal is famous for its ability to render photorealistic worlds at gaming frame-rates.

With the move towards motion capture and ubiquitous CGI in modern films, the prospect of being able to visualise the set and the characters in real time is tantalising. We’re even approaching the point where the output from the games engine could be the final version.

Epic Games with their Unreal Engine has done more than any other games company to turbocharge the film industry with their technology and at the very least they deserve our Best of CGI Award this year.

There was no doubt that this was to be the winner, except that it’s not going to ship for several months. We debated whether it should be excluded because of this but having seen the product in prototype form it was clear that the Sumo is at an advanced stage. There is no sense in which it’s vapourware. That being the case, it’s a worthy winner because it’s going to bring HDR monitoring to the masses at a great price point. And that’s without taking into account that it’s a video switcher and a 4K video recorder too

This has won this award because it is now an incredibly powerful audio editor as a result of incorporating all the technology from Fairlight’s Audio Engine. A speed increase (of up to ten times) confirms that this version of Resolve deserves to win. So Blackmagic Design has won two awards for the same product this year, and deservedly so, because Resolve is shifting tectonic plates with its scope and power, all available free, or at a new, lower price.

This is a product that has to be heard to be believed. New advances include machine learning that’s put to use to remove rustling and all manner of other ways to ruin audio. The most exciting characteristic of RX6 is that it does the impossible over and over again. If you’ve ever recorded audio and been horrified to discover that it’s been ruined, RX6 is your best - and maybe your only - hope.

The Sphere takes a feed from four cameras and stitches them in real time to output 360 degree video. Some argue that 360 degree video isn’t VR, but we disagree. In fact, it’s the only way to see wrap-around video. We firmly believe that this is part of the wider category that is VR.

Congratulations to Teradek for creating this compact, affordable and effective means to produce video in the round.

All we need to say is that there was simply no debate about this. Nothing compares with it. This is a company on the cutting edge. We wouldn’t be surprised if they produced a robot that did the ironing next.

G-Technology has almost become the default choice for DITs and anyone who needs to store and move large media files. The new EV range includes Thunderbolt 3, giving a very big speed increase. They’ve also started adding HDMI sockets to their Thunderbolt products. Why would you want an HDMI socket on a drive? Because Thunderbolt 3 can power your monitor too. This allows you to daisy-chain your monitor and your drive with the same, single connection to your laptop.

All of this, together with stylish industrial design and a five-year warranty, encouraged us to give G-Technology this award.

Simply a very good small camera at a good price

Building on the success of the original FS7, the new camera adds a variable ND filter and improved ergonomics. This was a close one. Other cameras are very good too. What tipped the balance was the legendary image quality from the FS7 cameras.

It’s becoming clear that Panasonic’s Varicams are winning the attention of more and more cinematographers, producers and production companies. With the ability to shoot accurately at ISO 5000, it’s possible to use this camera in environments where a conventional camera would be useless or where an expensive lighting rig would be needed. And the pictures meet with almost universal acclaim.

The new Tricaster works with 4K video and is built on top of NewTek’s remarkable NDI video over IP network technology. While other companies dance around each other to arrive at interoperability, NewTek has gone ahead and made a comprehensive and open IP video ecosystem that just works.

NDI deserves to win this. At the show, NewTek had over 40 NDI sources coming from other booths on the show floor, across a hastily assembled network. This sounds like a recipe for disaster. But in practice, it worked beautifully, and it made the point that NDI is here and now. Not only that, but broadcast-level manufacturers like Vizrt are including it in their products, dispelling any doubts about quality.

These new lenses provide real-time metadata about distortion and shading, as well as current lens settings. This data is invaluable in post production. When this is added to the very high-quality images that these lenses produce, it’s a very strong proposition. Congratulations to Zeiss for going down this path to the future.