NAB 2017: Videowalls and monitors to the fore 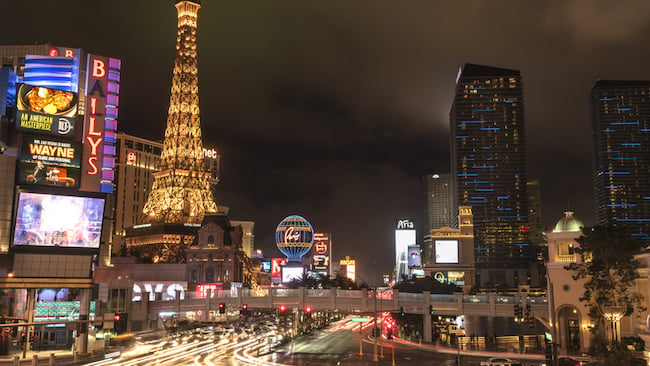 Las Vegas: it's not the night sky that tends to be the problem

As is traditional, Phil Rhodes wraps up this year’s NAB coverage with a quick look at the stories less covered and the things that it’d usually be necessary to have a good wander around the exhibits to notice.

First, FilmConvert’s CineMatch. The company is currently presenting its camera-matching solution as a standalone demonstration piece, not as the video processing plugin that it will, presumably, become in the end, but the results are promising nonetheless. It’s designed to match dissimilar cameras, something that can be a real time sink during conventional grading sessions, or particularly where a production won’t really be graded but needs to make the differences between cameras less jarring nonetheless.

This would all be useful and potentially impressive however it was done, but the underlying technology is really quite interesting. The company has gone to the considerable lengths of shooting test charts and characterising the performance of a wide variety of popular cameras, meaning that CineMatch can work without relying on a potentially unreliable image analysis algorithm. Instead, it uses an empirical database of information about the cameras used to shoot the two scenes, matching them mathematically. Naturally, this requires information about the cameras in use and their setup as well as different exposure and white balance choices, for which there are necessarily sliders, but beyond that the software appears to create very credible matches between cameras which can, by default, look very different. Whether this means it’s now possible to shoot on a Blackmagic Pocket Cinema camera and CineMatch it to an Alexa remains to be seen.

Ordinarily, it wouldn’t be the obvious choice for a monitor manufacturer to book a booth in the outdoor display area at NAB. The impact of the Vegas sun is palpable, even in April, and until fairly recently, an outdoor monitor showcase might have provoked nothing more than a lot of squinting at nearly-black rectangles. SmallHD, however, had other ideas at this year’s event. Several manufacturers, perhaps most prominently including Atomos, have released high-brightness displays in the last year or two. SmallHD serve a market which particularly values sturdiness and solidity of build, though, as we’ve seen in the past, and their page-based approach to user interface is nicely done. The company showed several of its displays, from the smallHD to the decidedly medium-sized-HD, coping nicely with the outdoor environment.

We’ll skim over this, as it’ll be covered widely elsewhere, but there’s a bit of philosophy to address about Atomos. They’re entirely upfront about the fact that the upcoming Sumo is not a precision reference display, and this is the thing to understand about their offering: while there is no one widely-accepted standard (or in fact, no few widely-accepted standards in plural) for on-set HDR monitoring, tools such as Atomos’s HDR viewing options will be useful, even essential. Sumo will not compete with a five-figure precision reference monitor, and isn’t intended to, but it will provide a very attractive option for people who need to be able to see at least something, outdoors, at midday, in Death Valley, and to have some idea of the potential for the image to be finished to any or all of the popular HDR distribution standards (which are far better standardized.)

And to close? No, we’re not going to talk about VR; this was certainly the year of VR at NAB, but there’s practically a fireworks display in the shape of the phrase “this is 3D all over again” floating above the entire idea. It may find a niche; that niche is, we might confidently predict, not in two-hour cinematic presentation. A better contender for the most noticeable technology is something that’s been growing bit by bit for years: LED videowalls. We’ve talked about Sony’s excellent CLEDIS, which brings pixel pitch down to 1.25mm and looks almost like a rather coarse, very bright plasma display close up, but the upper end of Central Hall was quite literally aglow with some extremely convincing, high resolution, high contrast, high brightness images.

No one technology is ever going to be “the future” in the way the hoardings predict, but it would be great if this sort of display quality were part of it.