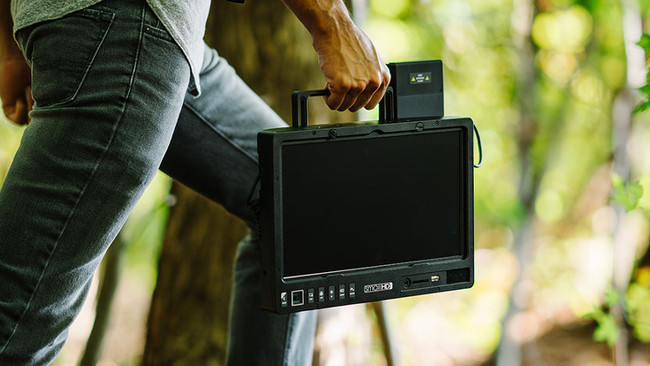 This new 13-inch field display from SmallHD sports HDR functionality, but how well does the unit (and the HDR feature) perform?

SmallHD's repertoire of displays has grown quickly, in terms of both variety and reputation. Having grown out of a filmmakers' desire for a very specific piece of equipment, the company has successfully built monitors from models small enough to be a viewfinder to 32 inch screens which belie the word 'small'. Its breakout product-line was probably seven-inch onboard monitors, now represented by the AC7 series, particularly those models with high-contrast, 720-line OLED displays.

The device we're discussing sits in the middle of the size range. The 1300 series comprises two models: the 1303 Studio ($2799) and an HDR variant at $3499, which is the option we have on review. A thirteen-inch display is possibly the minimum size at which full 1920 by 1080 resolution becomes relevant. The 720p image on a small OLED is usable, because the lack of resolution is barely visible at that screen size, whereas 13" really demands full HD.

First impressions are fairly conventional. There are only so many ways to package a TFT display panel in a box with a backlight and a few buttons, although even the most cursory inspection reveals fine tolerances and reassuring solidity. The case is metal throughout and connectors, other than the HDMI and USB ports, are attached securely to the chassis with threaded fasteners. The display itself is protected by a removable (presumably replaceable) transparent plastic insert, which suggests that the designer was familiar with the horror of having people point at things on an expensive display with the business end of a ball point pen.

Push-buttons are rubber-capped and flush with the panel, achieving a combination of durability, operability and proof against accidental activation. A VESA mounting bracket compatible with 5/8" lighting stands is supplied, along with a chunky adaptor plate perforated with quarter-inch and M3 holes. This is designed to support a suitable battery mount and a D-tap to 4-pin XLR adaptor is included. The included plate was for Anton-Bauer gold mount and the pre-drilled holes didn't seem to suit a V-mount plate we had lying around, but it wouldn't be rocket science to drill and tap to suit.

With the VESA mount, as well as a liberal scattering of 1/4"-20 threaded holes, SmallHD's product is probably one of the most flexible and sturdily-built monitors around. Inevitably, this comes at a certain compromise to portability. The company quotes a weight of eight pounds – more than three and a half kilos – making the 1303 a weighty little thing, even without a battery or wireless receiver, both things with which it's depicted in the literature (there's even a two-pin Lemo 12V power output to run a receiver). Fully rigged, it'd be a real lump, but then it would just be one lump to carry, as opposed to having a collection of bits and pieces held together with camera tape and hope.

Those unaccustomed to SmallHD's firmware will be pleasantly surprised by the huge flexibility. A very wide range of manipulation, test and measurement options are included, all minutely adjustable. For example, the waveform display supports luminance, parade or superposed RGB operation and can be independently scaled from 25% to 100% of the height and width of the display and positioned as desired. Additionally, the transparency of the background is variable, as is the intensity of the waveform itself, and it can be applied either before or after any applied LUT.

Even the focus assist has six options. Focus assist is also distinct from peaking and, yes, you can have both at once. Scaling of the image (to get it out of the way of the test displays) is separate from the focus zoom option, which is always available from the joystick on the front panel. The speed with which the colour picker slides around the display can be altered. The display can superimpose an image from an SD card, with variable transparency and flash rate (clearly a feature for stop-motion animators). This very incomplete list could expand to fill an article.

The challenge is to prevent flexibility from becoming complexity. To that end, the user interface adopts a useful page-based approach. Up to eight tools can be optionally assigned to each page and, since lookup tables are one of them, each page can have a different LUT, as can the output. The horizontal axis of the joystick scrolls between pages, including an output-preview page. The vertical axis selects focus zoom mode. There are four pages by default; more can be added at any time. There's only a couple of levels of menu, but inevitably, to control this many features, there's quite a lot overall.

The front panel hardware controls are not directly user-configurable. There are keys to turn LUTs on-and-off and one to select inputs. This is sensible. The dedication of three other buttons to activating and deactivating scopes, capturing images and dimming the backlight is perhaps less universally ideal; possibly these should have been assignable user keys. The intention is clearly for the 1303 to be suitable for an extremely wide range of tasks and it's unlikely that any front panel configuration could satisfy them all, so a degree of configurability might help here.

The intention for the HDR feature seems to be simply to provide a high brightness display for day exterior work and there are no specific features for HDR luminance handling or processing for downstream displays. It could be done, given a bit of ingenuity with LUTs, but it would be nice to see specific support emerge in future firmware, given the 1500-nit capability of the display panel itself. The monitor is supplied with a calibration sheet suggesting, in the case of the review display, an 0.85 delta-E maximum error on a ColorChecker chart, which is very creditable. As with many IPS TFT-LCD panels, there is some purplish glow visible when viewed off centre, especially on the top-to-bottom axis. This is a failing of the technology in general and images are otherwise good. Many high brightness displays show some backlight bleed and the 1303 is no exception, with the bottom left corner glowing a little on the demonstration model supplied.

For the sake of brevity, it's impossible to list every feature of such a feature-rich display. Other than 4K, it's hard to imagine what could be required that isn't on offer, especially if the HDR support becomes more complete in the future. The indestructibility and the big lumps of metal won't suit people who need to travel light, but there's no question over build quality, the software is very complete, and the monitor would seem a solid long-term investment.