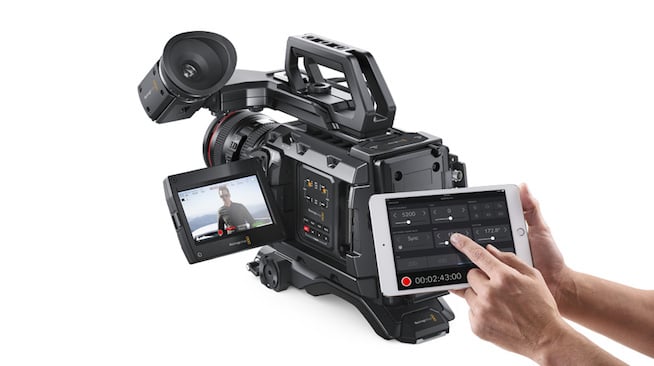 Bluetooth connectivity is going to allow you to have that camera and that iPad a lot further apart...

When the Ursa Mini Pro was launched recently, no-one knew that Bluetooth capability was hidden inside every camera. Now Blackmagic has turned it on and it's a bit of a work of genius.

What can you do with Bluetooth? You can control the camera remotely, but it extends a lot further than just being able to turn it on and turn it off. What’s more, Blackmagic has developed a new, open protocol to power all this and is publishing a developer API, along with sample code, so that developers can connect Bluetooth to almost every feature in the camera.

At NAB, Blackmagic was showing a simple iPad app that controlled a few basic camera functions. It worked well and responsively. The idea of being able to work the camera from an iPad sounds appealing.

You won’t be able to send video over Bluetooth, but that’s hardly the point. The point is that virtually everything that could have been shown on the camera’s LCD screen can have a duplicate functionality from an iPad app. This would be great for controlling the camera when it’s up a crane (as long as it's not too tall a one — Bluetooth connectivity extends about 30 feet and that’s in ideal surroundings) or for when you have a complicated set-up and you’d rather be sitting in a comfortable chair while you’re doing it.

What we’ll probably see quite quickly are digital slate applications to feed metadata, such as scene, shot, take information and even full script lines to multiple cameras on set while shooting.

The availability of the SDK means that we’re likely to see all sorts of remote controls spring up from developers — including the ability to remotely adjust camera settings and motorised lenses. And, as the company points out, technically skilled customers could even build an application that uses the camera’s built-in DaVinci Resolve colour corrector so that images can be graded live during a shoot.

New workflows are also possible. Here’s one that Blackmagic has cooked up itself. “Customers can mount Blackmagic URSA Studio Viewfinders on multiple URSA Mini Pro cameras to create a live multi-camera shooting scenario, however, instead of connecting to a switcher, the iPad can trigger all cameras to record to their internal media with matching metadata. This means the media can be later edited using DaVinci Resolve 14 multi-cam editing to work as fast as live production, however with the accuracy of post production. That’s faster, lower cost and higher quality editing than was easily possible in the past.”

The URSA Mini Pro Bluetooth API and sample code will be available in June 2017 as a free download from the Blackmagic Design website for all existing URSA Mini Pro customers. It’s going to be fascinating to watch how it will evolve as soon as dev teams start playing with it. It’s also login to be interesting to see how quickly bluetooth fictionality gets folded into new versions of other Blackmagic cameras.