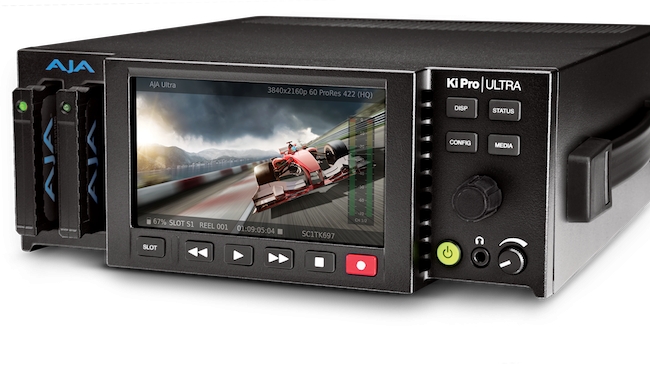 AJA’s well-regarded 4K powerhouse recorder and player can now be picked up for $2995.

This is the first price cut for the Ki Pro Ultra since it was announced back in November 2015, and at 25% is a significant one.

Indeed, AJA has applied the same formula to the KiStor Dock and Pak Dock Thunderbolt and USB docks for Pak and KiStor media, it’s only that a $100 cut down to $295 tends to get lost in the haze when you’re taking an entire thousand dollars off something.

The Ki Pro Ultra has a built-in LCD monitor and is capable of capturing edit-ready Apple ProRes files in a range of video formats and frame rates up to 4K 60p. Avid DNxHD file support was added late last year. It’s designed to be both portable with a built-in handle, or rack mountable with half-rack wide 2RU dimensions.

And, as we said when it was fist unveiled: “Do you remember when it used to cost over $40,000 dollars to buy an HD deck that would record and play back? Nobody seemed surprised back then that this complicated piece of gear was so expensive: it was just part of the well-accepted landscape where, if you wanted broadcast quality, you had to pay for it.”

You still do. Only the price is an order of magnitude, now minus an extra $1000, less.