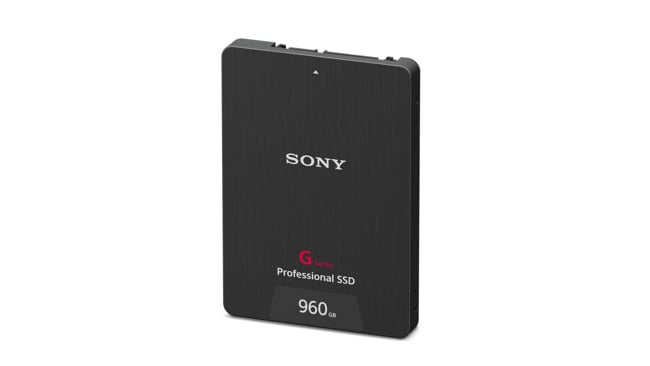 With data accumulation advancing all the time, reliable and long lasting storage options that don’t require encasing in kryptonite are an essential part of the armoury. Enter Sony with a new solid state disc unit claimed to last a decade for the average user.

There are in fact two new SSDs in its G Series range of drives, dockable to camcorders and DSLRs. These are the SV-GS96 with a 960GB capacity and the SV-GS48 with a 480GB memory.

The 460GB drive is rated to reach 1200 terabytes written (TBW) while the 960GB SSD achieves up to 2400 TBW using Error Correction Code which is a way of detecting and correcting bit errors in memory.

Sony calculates that if data is fully written to the drive an average of five times a week then the 960GB model will last you a good ten years. In comparison, you’d need to buy three 300TBW drives to record the same material in the same timeframe, Sony says.

It further claims that “while other SSDs have a tendency for data write speeds to suddenly drop after repeated re-write cycles”, the new machines have been engineered to prevent sudden speed decreases, at the same time ensuring stable recording of 4K video without frame dropping.

It has tested this and states that when paired with an ATOMOS Shogun Inferno, the G series SSD was able to record video at 4K 60p (ProRes 422 HQ) mode stably.

If the drive is removed prematurely or if the recorder’s power is suddenly cut off Sony’s data protection technology kicks in to keep the data secure.

Apparently shock resistant even when dropped from shoulder height, the drive’s connector will stand up to 3000 removals and insertions according to Sony tests.