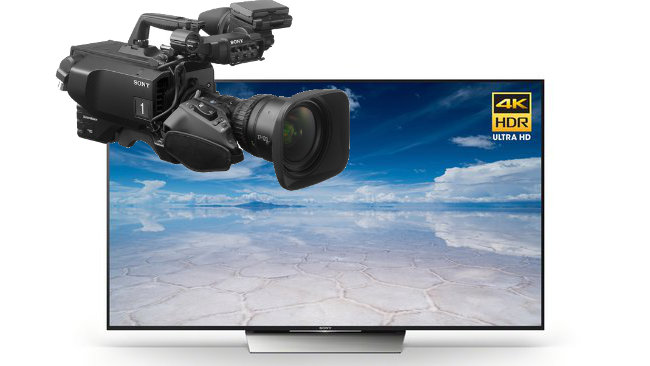 Sony's recent announcement of its intention to update some of its live broadcast gear with HDR capability is both interesting and rather well-timed.

Fun as it is, most television, by hours of broadcast, is not single-camera drama. In fact, in many markets, the subject which makes the most money overall is live sports. Even if that weren't true, we can't fill every hour of airtime with material which takes a week of shooting and months of post-production to produce. As such, if technologies such as UHD and HDR are to make any headway, they've got to be made attractive to people whose enthusiasm for sports or home shopping makes it worth their while to buy a UHD or HDR television in order to watch football or buy – well – whatever it is that people buy from home-shopping channels. So, as we said earlier on, Sony's recent announcement of its intention to update some of its live broadcast gear with HDR capability is both interesting and timely.

The core of it consists of updates to system cameras – the HDC-4800, the HDC-4300 and the little box-shaped HDC-P43, all of which are 4K live production cameras. Soon, they are to support SLog3 brightness encoding and Rec. 2020 colour. The choice of SLog3 is, of course, natural for Sony. It is not a format that's directly compatible with any particular HDR standard, but it is a good way to fit lots of dynamic range down a link between a camera and the gallery or outside broadcast truck, where it will presumably be processed into at least a couple of HDR formats for every broadcast. The company discusses its HDRC-4000 processor, designed for this task, in terms of producing HLG or PQ deliverables. There is some discussion of “algorithms”, implying that there's at least some degree of automation involved in this process. This is inevitable since the distribution of HDR content is still somewhat up in the air, with regards to things as simple as the audience expectation of what good HDR looks like. So, we can probably expect changes and therefore updates from all of the manufacturers who are involved in this work over the next few years.

One of the things that Sony talks about quite a bit is HDR in high definition, as opposed to around-4K resolution. Initially, it seemed to be the general intention that HDR would be associated with UHD, although, of course, there's no technical reason that it can't also be implemented at a lower resolution. Particularly, this approach might suit organisations who aren't keen to rebuild a complete 4K production and distribution system from scratch, but who'd like to be able to produce HDR material. In theory, much of the HD pipeline could remain. The BVM-E171 OLED display, which is an HD device, will support HDR in this scenario.

Finally, there are updates coming for the FS5 and Z150 cameras, which are both to receive HLG compatibility. In the case of the F5, this is to be implemented as a new picture profile, which emphasises the idea that an update to support new brightness encoding should be reasonably straightforward. After all, all cameras have a defined encoding — even the studio cameras — and the idea of including a new, different one is not outlandish from a performance or reliability point of view.

This is all good news. If new technologies are to gain currency, a certain critical mass is necessary. The harsh reality is that in order to create an HDR delivery market, we're asking everyone to buy a new TV again, so there needs to be something to watch on it. HDR doesn't necessarily suffer the same issues of dubious watch-ability and popularity that stereo 3D does. It's almost universally liked by both the industry and the statistical average viewer, and as such it probably has a more reliable chance of becoming an everyday occurrence, as opposed to the special event status that was the height of popularity for 3D.

But for that to happen, everyone from studio equipment suppliers to TV manufacturers needs to be on the same side. The only concern now is which side they're going to be on, as it's not clear which of two or three HDR formats will gain currency (and there ideally does need to be just one.) If the industry converges on some level of capability that's not clearly and obviously much better than standard dynamic range – as some TV manufacturers arguably have with the UHD Premium initiative – then nobody will see a need to buy it.

As such, the success of all this is somewhat in the hands of the domestic TV people, almost more than ever before. Excellent HDR displays, which are massively persuasive to non-engineers, can be made. It's just a matter of figuring out a way to make them for under $500. In the meantime, all we can do is keep cranking out content that's likely to persuade people to buy this stuff and Sony's moves are very welcome in this regard.