Is the new Blackmagic Ursa Mini Pro a killer camera for news? 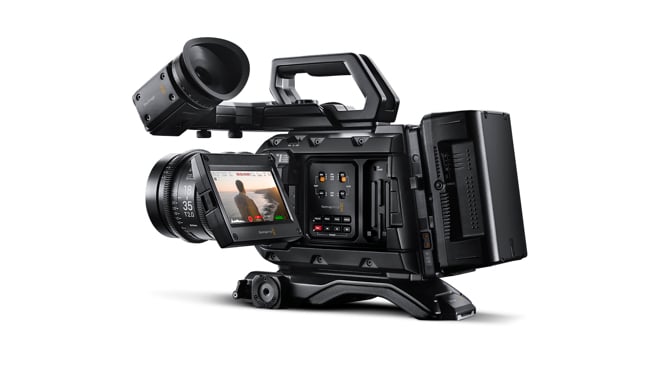 The new Ursa Mini Pro: One for the ENG crews?

Does Blackmagic's recent unveiling of the Ursa Mini Pro effectively make it the first decent new entrant to the ENG camera market in years?

OK, it's been possible to shoot news and documentary on all kinds of cameras, and those from Canon and Blackmagic have frequently been rigged up for work off the shoulder. The original Ursa Mini remains a good candidate for this sort of work, since the shoulder kit and viewfinder set it (and presumably the new Ursa Mini Pro) up very nicely for switching between handheld and tripod-mounted operation. Even so, while the new camera doesn't ultimately provoke many huge changes in the things which are strictly possible, it does make a lot more things practical, and it's very clearly a step directly towards the traditional news, or at least news-style, camera.

In that definition of “news-style”, we're actually overlooking a rather specific variety of camera which is actually used for a large proportion of current newsgathering. They tend to have smaller sensors, servo lenses and are packaged in handycam format. Still, if we accept a commonly-held definition of what an ENG camera is, this long has been a market owned almost exclusively by Sony, Panasonic and Ikegami, with a very honourable mention for JVC's excellent compact cameras in the GY-HM series. Perhaps the nearest example of a fourth company addressing this market would be ARRI’s Amira, but that's far from conventional in terms of sensor size, weight, or power consumption.

Okay, the Ursa Mini Pro is also a super-35mm sensor camera, but it will use the excess resolution of its 4K sensor to window down to something much more similar, in lens demands and optical performance, to a 2/3” HD ENG camera.

In modern practice, full-sized ENG layout like that of the Ursa Mini Pro is actually more likely to be found on broadcast documentaries or the lower end of single-camera drama than actually on the cutting edge of war zone current affairs reporting. As such, our thesis here is perhaps not so much that Blackmagic has made an ENG camera specifically with the intention that it'll be used for electronic newsgathering but because the layout makes sense in general. Feature film people may disagree, on the basis that the lion's share of the controls should really be on the side opposite the operator for better accessibility by the first assistant, but it remains the case that most productions don't work like that. In any case, that's the need the full-sized Ursa was designed to fulfil.

The most common complaint about ENG cameras on single-camera shoots, though, is the length. A fully-rigged Sony HDW-F900 was a large beast in itself, and with radio mic receivers, a video transmitter, and other accessories between battery and body, the length could become a real issue in tight locations. The Ursa Mini series doesn't really have that problem – in fact, they're a bit too short, if anything, to counterbalance some of the lenses they're likely to be used with. This is something of a champagne problem, though, since useful accessories such as larger batteries, V-mount power supplies, or even a stack of both are genuinely useful things to carry around.

Overall, it seems fair to consider that Blackmagic, with its studio kit for the Ursa Mini and its new Pro model, is among a very small group of manufacturers to address the broadcast market in quite such a direct way. Whether the broadcast market is interested remains to be seen, although the existing studio cameras have seen much exposure in education, and, as we've seen plenty of times over the years, things have a way of making their way from university campus to the studio floor as the educated masses graduate and take their experience with them.