Blackmagic press conference live blog- the news as it happened. 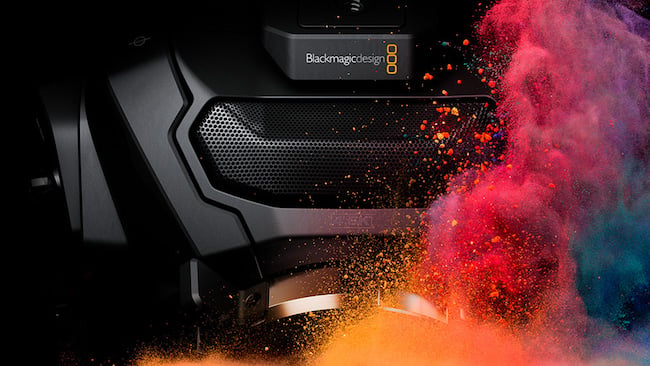 That's it for now. Come back in a few minutes to see full details posted on the site. Thanks for watching!

URSA - they've been slow to upgrade - because of sensor issues and low demand for upgrades. So special discount for URSA users. Doesnt' cost much more to upgrade to URSA Mini Pro than to upgrade URSA.

Grant is showing all types of shoot that you could use this camera for: wildlife, music videos, action sports.

So he's just changed the lensmout to a B4 broadcast lens. All looks very convincing.

I have to say he's very brave to do this live (he said he might accidentally stab himself!)

They've built an SSD recorder that bolts onto the battery plate! Uses 12G SD connector. (They hope to make it work on the original URSA Mini as wel)

SD cards are between the CFast cards - but don't take up much more space. SD cards really lower the cost of shooting HD and ProRes UHD.

Grant is now setting up an URSA Mini Pro with a battery, lens and viewfinder. Sees very simple.

Two slots per media type - CFast and SD - so redundancy here as well.

Previous URSA mini was designed to be tough, but this one has redundancy built in - even the power switch! There's an alternative way to turn it on and off! That really appeals to me!

This may be roughly the same form factor as the previous camera but because of all these external controls it really is significantly different. Don't be surprised if it costs a lot more!

LCD shows external timecode. You can lock the external controls so you don't accidentally activate them.

LCD on the outside - is actually in Black and White - for better visibility in difficult lighting conditions.

There's power switch on the outside! (Means that you don't have to open the side-monitor flap to turn it on and off).

Customisable function buttons. A programmable HFR (High Frame Rate) button - can be preset to the frame rate you want.

Each control is designed to feel different - so the operator never has to look at them.

One press and it will set the white balance.

So you're not stuck with expensive CFast cards

Biggest difference from "standard" mini is that it has many more controls. Same form-factor

The idea was to bring "digital film" cameras to a much wider audience. At the time, video cameras didn't look great, and you couldn't manipulate the footage very much. Everything was focused on wide dynamic range. Also used open file formats like ProRes and Cinema DNG

ie "Digital film" - you can grab more of the scene and bring it with you.

Moving on to cameras...

Hopefully Blackmagic is going to advise us about which GPUs to use!

Even more buttons on the right - more "direct action".

On the left of the raised bit there are buttons that can select menus. Again, very immediate response. So direct access to Davinci menus from the front panel - you can select virtually all menus from the panel.

USB C again (and again supplied with a connector).

Has an AC connector and even Power Over Ethernet. Doesn't run off USB power. But you can charge a laptop from it!

It's more of a "console" with a raised rear that has (intriguingly) two screens.

On the right of the panel are some "next action" buttons (next clip, etc) that mean you rarely have to visit the software interface

Price is $995. Available today. Next the Mini panel.

Don't be misled into thinking that a "micro" controller isn't going to be powerful. It's really quite impressive.

The integration between the Micro controller and the software is impressive. Very immediate, very responsive.

What you might not know about Grant Petty is that he started his career as a technician in a post production facility.

Grant is giving us a pretty comprehensive explanation of the knobs. Essentially a colour correction tutorial!

This really does look like a nice piece of kit. Will be interesting to see how much it costs.

All the knobs are the same design as on the (original) advanced panel: very precise - 4096 levels for each one.

The UI lights up when you plug it in. It seems to have all the standard primary colour corrector controls. Don't be misled by the term "micro": its not like a glorified mouse - it's actually bigger and thicker than a 15" laptop.

Grant has just plugged it in and it "just worked". The micro is designed for users who are editing and grading in the same session.

It's USB powered (USB C!) but comes with an adaptor.

To get the design right - and they could do it any way the wanted - so they tried to centre it around the way people were working. How they were doing it.

And what about portable workflows?

So what can be done to encourage people to colour correct creatively?

Grant is talking about the telecine stuff. Apparently so many people want to look at film, and perhaps this is distracting them from the actual process of properly colour grading the material itelf. He wants to enhance this creativity in a primary colour corrector.

With Editing - you're working in a completely different way.

With colour - you're not really moving objects around the user interface: you're working on a single clip. You don't want to take your eyes off the screen.

Why do you need a panel? Colour correction is unique. All the creativity that DaVinci has means that you really do need a Panel.

There are some new control panels.

Three new workflows. Dedicated workflow - that's what the advanced panel has been used for. But lots of people switching between the two disciplines (colour correction and editing). Some even do it at the same time. (editing and then grading immediately).

Resolve has brought grading to all levels of users. Meanwhile grading has spread to all types of productions. They really needed to think about the workflows.

The workflow has changed since there's been editing.

Originally Resolve didnt even have a menu. It could only use the control surface.

Here's Grant. "Thanks for joining us this morning!" We've been wroking really hard on some updates. First let's talk about Resolve.

Two minutes to go and there's some nice loping acoustic guitar music. Great for typing to...

As an Editor, I prefer this. Even though I'm sure BMD will have things to announce at NAB, its really good if they're not all shown at the same time. It gives us a chance for proper and considered coverage.

It's slightly surprising that Blackmagic has chosen to announce whatever it is they're going to announce so soon before NAB, but I think it's a better way to do things. Developers and engineers get things ready when they're ready. When you consider that they often have problems to solve (and the definition of a problem is that it's something you don't know the answer to) then it probably places an unreasonable strain on everyone to give them hard deadlines. This can also lead to announcing products before they're ready to ship.

Don't forget to hit "refresh" often, btw. We're not using special liveblog software - so you'll have to manually refesh to see the updates.

The caption in the Webstream has just changed, so we know that we're live.

Grant Petty, CEO of Blackmagic Design, is an excellent presenter. He probably doesn't relish giving public presentations (who does) but comes across extremely well and it's always fascinating to hear the background to the company's product design decisions. We're assuing it's Grant that's giving the talk today.

By the way, we're adding new text at the top - so this runs in the opposite sense to usual. Scroll down to see what we've already written.

Hello everyone, it's Dave Shapton here, editor of RedShark. We're just settling down to watch the live webcast from Blackmagic. This is our first-ever live blog, and I'd just like to reassure everyone that we have absolutely no idea what we're doing. This is very much a trial run, which might or not go smoothly.

Here's now it works. I'm watching the live webcast. For the benefit of anyone that can't see it, I'll make my comments as quickly and as accurately as possible. I'll try to give an impression of whatever's going to be announced, and - for what it's worth - what I think of it. You're welcome to leave comments too.

Right now, there's 11 minutes to go until we get started.