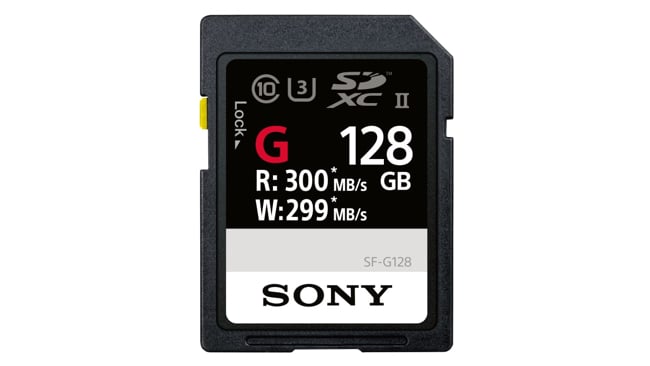 Sony claims to have done that with the SF-G, a new SD card series in the UHS-11 class, that leapfrogs all comers with a spec that pegs write speeds up to 299MB per second and read speeds up to 300MB/s for file transfer.

By comparison SanDisk’s Extreme Pro UHS-11 card – holder of the throne since early 2014 – was rated at 250MB/s write and 280MB/s read by the manufacturer. Rivals include the Lexar Professional 2000x UHS-II U3 and Toshiba Exceria Pro UHS-II U3.

All marketing claims need substantiating against actual performance and it’s a caveat Sony itself makes stating that: “transfer speeds vary and are dependent on host devices, operating system and usage condition.”

However, we’ll take it as read that Sony’s new card does indeed make it the best performing of its class for your high-performance DSLR or mirrorless camera. Write speeds of this order are essential for continuously taking high-resolution images, such as RAW and JPEG, as well as sustained video capture of 4K.

Sony says it wrote an algorithm to prevent loss of speed in data writing even after repeating burst shooting, and that this contributes to the camera’s speed of burst shooting.

The cards are available in 32GB, 64GB or 128GB capacity from next month and can be used in conjunction with a new memory card reader, Sony is introducing in April. The MRW-S1 has a SuperSpeed USB (USB3.1 Gen.1) standard A port for cable-free PC connection, so that files can be copied faster than copying through the SD slot on a PC.

The UHS (Ultra High Speed) version II has a maximum transfer rate up to 312MB/s – so we’re pretty close to needing an even higher performing standard from the SD Association.

No word yet on price