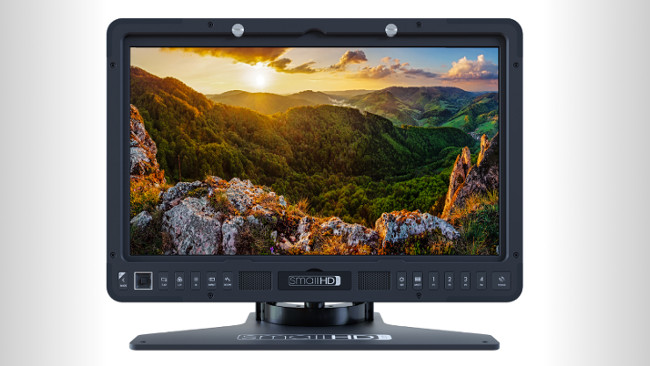 When we recently looked at SmallHD's 1303, we were impressed with the software and the sturdiness of the build, the resulting heft notwithstanding. Now, for not much more money, the company has announced a 17-inch display (1703-P3) which promises full coverage of the DCI-P3 colour gamut.

This directly addresses one of the principal concerns of many recent monitors, which have often been based on commodity panels intended for tablet and computer displays. This has given us access to the enormous research and development potential of mass-market electronics, but the selection of red, green and blue primaries for those displays is generally intended to render an image according to the computer-oriented sRGB standard. This differs from the common video standard, ITU-R Recommendation 709, only in its luminance handling, so it's possible to make a reasonable 709 display from parts intended to create sRGB computer and tablet displays. Creating a DCI-P3 display, on the other hand, requires some fundamental changes to the way the panel is made, so handling of colours beyond 709 has been rare in anything but the highest-end displays where the panel is built, at great expense, more-or-less from scratch.

What this actually gives us is a richer variety of red and green colours, which are deeper and more powerful in P3. While that naturally lets us see better reds and greens, it also makes for deeper yellows where the two colours mix, as well as greater varieties of purple-magenta hues where the deeper red mixes with blue. Particularly, cyan and turquoise colours are expanded where green and blue mix, which has traditionally been a noticeable limitation of Rec. 709. P3 is the colour space of digital cinema and nobody will object to the idea of being able to grade for that result, though the majority of real-world applications will probably prefer this monitor mainly for its ability to render a 709 image with very great accuracy.

The billion-colour (that is, 10-bit) capability seems like less of a feature than the colour performance. The press release talks about the billion plus individual colours which are resolvable in 10-bit colour and this is fine; there are thirty total bits per RGB pixel and two raised to the power thirty is 1,073,741,824. The actual phrase used is "10-bit colour processing," stopping short of making claims about 10-bit display. Almost all TFT panels are 8-bit or less, sometimes using a technique called 'frame rate control', but which essentially means pulse width modulation, expanding colour precision by moving pixels between adjacent states very quickly.

Precision monitoring for the masses?

It'll be interesting to see what SmallHD's approach is here, but what's actually important is that the internal processing is at a high enough resolution to ensure the displayed image is free of rounding errors. These can exacerbate noise and create banding and, for this reason, most LUT implementations work internally at a bit depth higher than the incoming video, which will often be at a maximum of 10 or, at the outside, 12 bits.

Regardless of the approach to colour precision, the spec is encouraging. 1500:1 contrast is claimed, which is better than most TFT displays. All kinds of contrast numbers are often claimed for monitors and they often fall off precipitously with changes in viewing angle, so again, this will be something to look out for when we get our hands on one. The 450 nit peak brightness means this won't be an HDR display in the (consumer-oriented) language of the 'UHD Premium' badging scheme, since it isn't bright enough to satisfy either the TFT-oriented or OLED-oriented specifications (and nor is it UHD). That's not really the point; the point is the colour capability, the 0.5 delta E accuracy and, of course, SmallHD's superb software.

Assuming these specs are achieved, it ought to be a competitive way into precision monitoring. The SmallHD 1703-P3 will list for $3999 and is slated to begin shipping late February 2017.