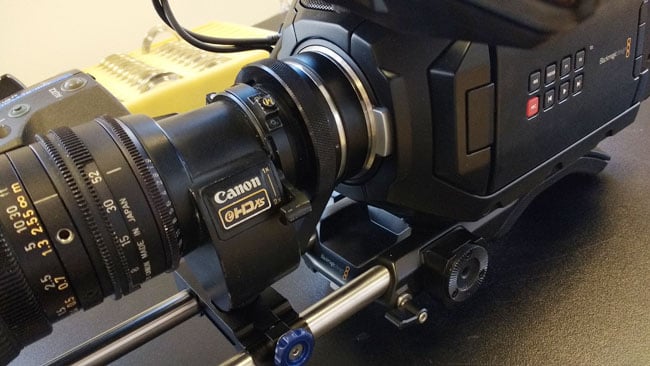 Big chip cameras are good. Bigger sensors mean bigger pixels for the same resolution. Bigger pixels also produce better sensitivity and dynamic range with less noise. This satisfies demands for sheer quality, but it creates a problem: filling big silicon with pictures demands lenses which are bulky, heavy and expensive. For this reason, there's long been an undercurrent of interest in shooting smaller, cropped areas of modern sensors. This relates directly to the idea of the 16mm documentary camera of decades past, where the smaller film frame was easier to fill with sharp images from a fast, compact, lightweight, affordable lens. Meanwhile, one of the side-effects of modern 4K cameras is the ability to create an excellent HD frame from an area of the sensor that's similar in size to a 16mm film frame or 2/3" video sensor, providing the choice of either big or small sensor shooting in a single camera. 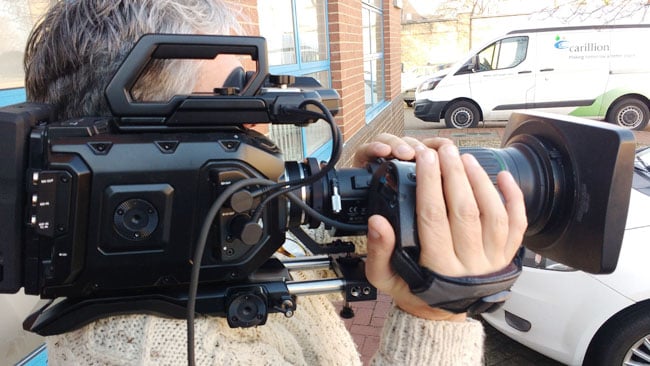 Operating the Ursa Mini 4.6K with a Canon HJ11x4.7B lens.
With only a small battery, it is rather front heavy - add more accessories.

If we really must have big chip documentary glass, options exist, but there are caveats. Fujinon's ZK4.7x19 19-90mm zoom, as well as the CN7x17 17-119mm from Canon, remain the gold standard for those with a budget reaching up into the tens of thousands. Price aside, though, there are circumstances where they don't work; both are big, heavy lenses by documentary standards, refusing to sacrifice imaging performance or minimum f-stop for small size and light weight. Moving down a price band, we find Zeiss's impressively compact LWZ.3, covering 21-100mm at a slightly variable f/2.9 to 3.9. It's extremely useful and available in a wide range of mount options, but it's still over £10,000. 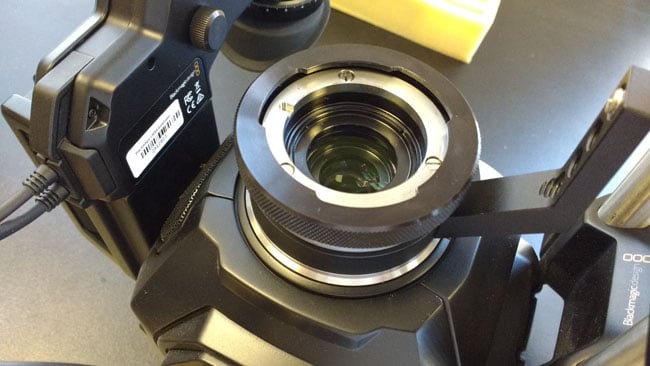 The optical parts inside the adaptor expand the image only slightly,
but also correct for the fact that  the lens expects a three-chip camera.

Canon's 18-80mm EF-mount zoom is a wonderful and beautifully-made thing and, at £4700, it's a fairly affordable route to a handheld zoom on a C300 or Ursa Mini. The T4.4 minimum aperture is sometimes criticised, although that's ungenerous given the size and weight. The problem is that 18mm is not that wide and 80mm is not that long. They're reasonable numbers for the size and cost, but this specification may frustrate people used to ENG zooms, such as the seminal Canon HJ11x4.7B, which will cover 4.7 to 104mm. This involves the extender and a commensurate increase in effective f-stop, but the minimum aperture is marked as f/1.9, so it's still very usable. 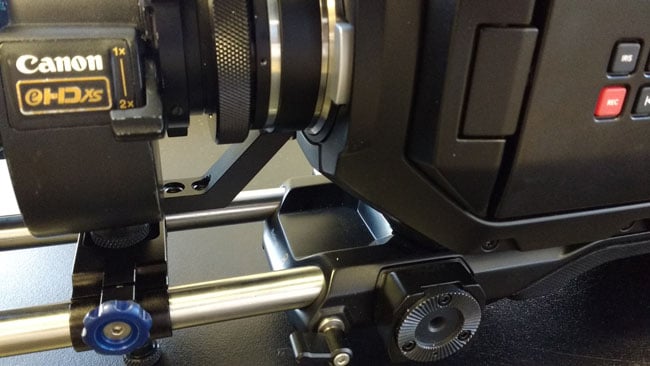 A bridge support reinforces the EF mount against overstress.

Adaptors for mounting B4 newsgathering lenses on big-chip cameras have problems of their own, of course. A 2/3" chip is about 8.8 by 6.6mm, whereas the Super-35mm frame is (theoretically) 24.89 by 18.66. The amount of expansion required creates a significant stop loss, which may cause enough optical aberration to make 4K shooting possible in name only. A far better engineering solution is to use a smaller area of the sensor – that's what MTF Services' upcoming B4-to-EF adaptor allows. The adaptor, of which we enjoyed a sneak preview, expands the 2/3" coverage of a B4 lens very slightly and corrects for design aspects of B4 lenses which are intended to work only with three-chip colour splitter blocks, which would otherwise cause softness at low f-numbers.

On the Ursa Mini 4.6K, it works extremely well. The 4.7mm-effective wide end is particularly crucial for news and documentary handheld work or shooting inside the very small houses and apartments which are becoming normal in the UK. The minimum aperture, taking into account the extender and the small expansion of the adaptor, is probably slightly over f/2 from 4.7 to 52, and around f/4 from 52 to 104mm. There is adjustable back focus and macro, the focus rotation is comfortably operable without shifting grip, the size and weight are low and there's a highly ergonomic grip with focus and iris motors built in. No lens ever made offers all this for Super-35mm sensors, let alone for the £4300 currently being asked on eBay for a used Canon HJ11x4.7B. 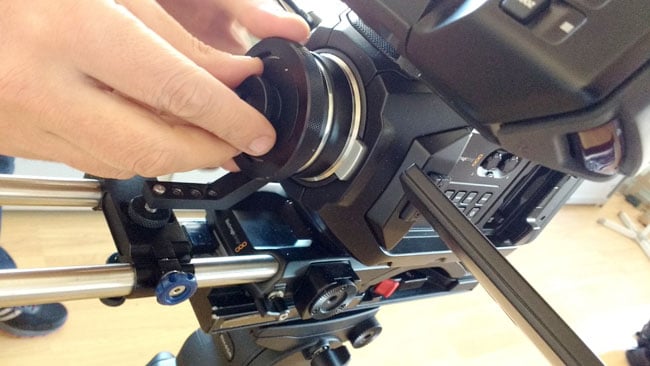 MTF have engineered a new EF mount for the adaptor, ensuring a precision fit.

Lenses such as this are complex optical designs and the resulting pictures will not be as sharp and contrasty as those produced by a simpler, less capable stills lens. However, quality lenses intended for high definition work, such as the Canon discussed here, should not offend a quality control assessment. The stress test, wide open and at maximum focal length with the extender selected and viewed at 1:1 pixel size, creates the most difficult scenario possible and it is reasonable to expect some visible issues. There is a lack of contrast in barely-defocussed areas, worsening in the corners. This effect is almost eliminated on sharply-focussed subjects. There is a very small degree of magenta-green vertical chromatic aberration, again, most prominently in the corners and on slightly-defocussed subjects. All of these are common for this type of lens in stress-test circumstances, regardless of the camera they're mounted on, and there are no problems directly attributable to the adaptor.

Naturally, results will be worse with some poorer lenses, especially those with a very large zoom range or lower-cost types. In a pinch, older lenses intended for standard-definition work can be pressed into service, but operators might choose to avoid the bottom couple of stops. Otherwise, the only concerns are mechanical. The EF mount is not really designed to be part of the support structure of a shoulder-mounted camera and MTF has included a bridge support to allow 15mm rods to take the strain. This is height-adjustable, although some people might prefer to replace the threaded support with a shorter 1/4"-20 machine screw or cut down the supplied part, so that the excess make it difficult to put the camera down on a flat surface.

Beyond that, the combination of Blackmagic's camera and Canon's lens is a triumph of usability and capability. The Ursa Mini already enjoyed an excellent viewfinder and general layout, with a slight caveat for that power button and the lack of a filter wheel. This sort of configuration is, of course, less suitable for the most formal single-camera drama shoots and short-rotation lenses like this may frustrate focus pullers. Radio remote focus, with the ability to expand the lens scale, is useful here. Still, the only other thing we now need to effectively shoot news on the Ursa Mini is interlaced video modes. MTF prices the adaptor at £1500 and it will be available in a few weeks. People needing 4K or simply desperate for full-sized 35mm sensor coverage will need to look elsewhere, but shooting Super-16mm sized sensors really is the key to the city.