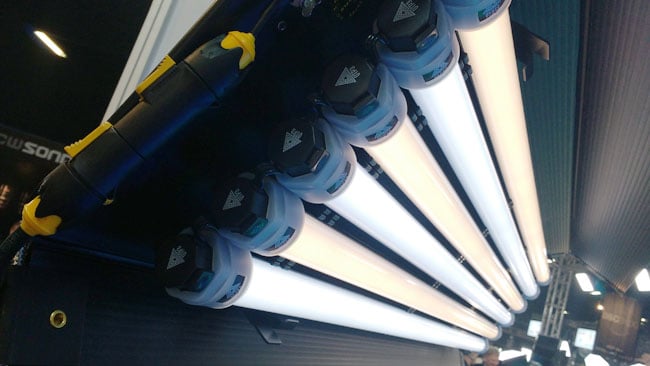 The drive for LED lighting is now so significant that one of the most identifiable themes of the recent BSC Expo in London was conversions and retrofitting. Rental facilities Panalux and Quasar Science, via their recently-announced UK distributor AC Entertainment, both showed LED devices in housings traditionally intended for other light sources, representing an interesting opportunity to look at how well these solutions work.

Quasar's offerings are becoming reasonably well known, although principally in the US, where the company has been operating for rather longer. There are various versions in sizes to mimic both T8 (one inch) and T12 (inch and a quarter) tubes and which accept power in various ways. Perhaps the devices most often seen on film sets hail from the Q-Led S Switch range, which offer either 3000K or 5600K output at the flick of a switch. There's also a version with the ability to crossfade between colour temperatures (which may not be quite the same thing as moving along the blackbody curve, but will often approximate it closely enough.) There are versions which will receive power from either one or both ends and, perhaps most cleverly, the electronics can be run from a conventional triac dimmer. The tube will recognise this and modulate its output while avoiding flicker.

They're usable in all kinds of applications, especially since the company makes a T8 version, called 'direct', which can be used in conventional fluorescent fittings without rewiring. This is useful when replacing tubes on a location, although it won't usually be necessary for retrofitting Kino-Flo-style movie lights, where the opportunity to get rid of the ballast will be very welcome. It's generally possible to fit six four-foot Quasar tubes, each at 50W, into a Kino housing. This puts the resulting device at power parity with the original four KF55 tubes, which are rated at 75W each. Many sources suggest that the resulting light will be brighter than the original. This may be best explained as a result of the better optical efficiency of the LEDs, which emit in only one direction, as opposed to the fluorescents, which generally rely on a slightly unconvincing reflector arrangement which seems to bounce much of the light back through the opaque body of the tube itself. 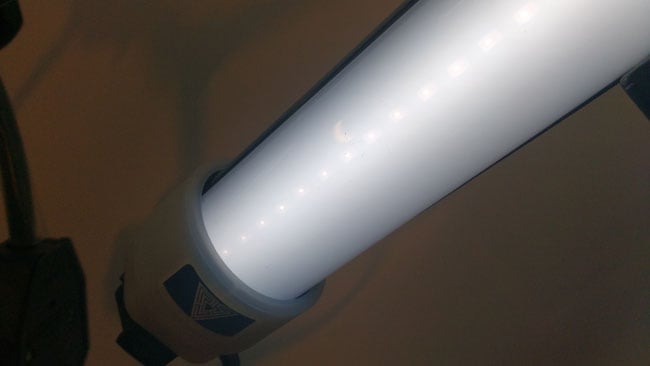 Indvidual LEDs are visible up close and when carefully photographed,
although the diffusion is perfectly judged  under normal circumstances.

AC Entertainment is selling four-foot, 50-watt Quasar tubes for a price some way north of £200, excluding VAT, making a six-tube retrofit an expensive proposition. The usefulness of it is, in some ways, beyond doubt; the new tubes are sturdier, dimmable without colour shift and offer variable colour output. The resulting light also has a fairly attractive power-to-cost ratio, developing 300W to the 110W of the similarly-expensive Litepanels Astra, although the Astra is not really that comparable; It'll appear brighter, being more directional, and has a completely different physical layout. The main query, though, is that retrofits like this are generally pursued with the idea of getting more value out of existing gear. The value of a Kino-Flo is in the excellent colour rendering of the tubes and the flicker-free ballasts. Absent that, it's just a fold of corrugated plastic with a ball mount on the back. There's value in familiarity, perhaps, but the availability of low-cost, general-purpose LED panels with increasingly credible colour performance do make Quasar's offerrings look a little expensive.

The other interesting example of LED retrofitting came from Panalux's Decapod, which is ordinarily a really jumbo-sized array of 144 GU10 lamps, each at 75W. With the resulting power consumption nearing eleven kilowatts, this is a tool of the high-end film industry, as well as offering a quick and easy way for the electrical department to heat up a tasty lunchtime pie should the need arise. Arrays of relatively small devices like this have been used for decades and are perhaps best known in the (largely American) context of things like Mole Richardson's Brute and Molefay, which are arrays of PAR64 or General Electric 650W FAY sealed beam types respectively. The advantage of this sort of approach, whether it uses the two-inch GU10 or the four and a half inch PAR36 FAY, is the creation of a light which can penetrate without necessarily having a tiny source size, much like an LED array. The disadvantage is in the creation of multiple shadows, again, just like an LED panel, and they're perhaps best suited to driving diffusion. 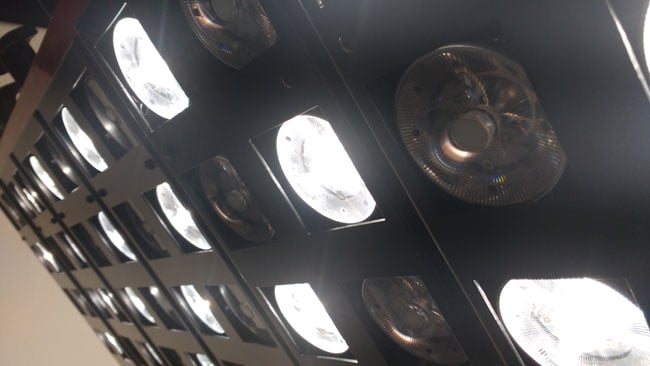 The LED GU10s aren't quite as  bright as 75 watts of tungsten halogen, but this is likely to change quickly.

Anyway, the general market for mains lighting is now long since mature enough to have provided GU10 LED replacements with good enough colour quality for film and TV work. Panalux is using Soraa GU10s, likely from the 'vivid' series, which trades off a little output for better colour rendering, with the result that the LED Decapod was presumably a very straightforward retrofit. Soraa suggests that the 7.5W Vivid GU10 has equivalent brightness to a 50W tungsten-halogen device, although that feels subject to the usual amount of LED industry overstatement. Usually, the efficiency advantage is something like 4:1, although we should bear in mind that Soraa makes the vivid GU10 in a variety of colour temperatures, which could otherwise be achieved only with lossy filtering. There is no intrinsic option to select colour temperature, although various banks of the Decapod are switched individually and could reasonably be loaded with various colour temperatures to allow a degree of mixing. 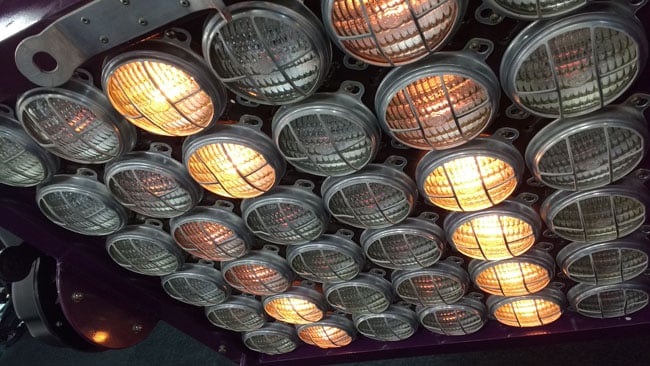 Tungsten-halogen PAR arrays are very effective, but the heat was detectible ten feet away.

144 7.5-watt LEDs are not as bright as 144 75W tungsten GU10s – it's probably about half, at a guess – but it certainly makes a very bright and very directional device. The LED industry will give us 20-watt LED GU10s when it can figure out how to make them so they don't catch fire. Crucially, the LED Decapod consumes a miserly one kilowatt, being easily powered from a household mains socket anywhere in the world. The LED Decapod was shown right next to a more conventional PAR36 array and the enormous barrage of heat emitted by the tungsten-halogen lamps, even at 15% power as a show-floor demonstration, was almost sobering. Panalux is a rental-only company, but it's an interesting example regardless.