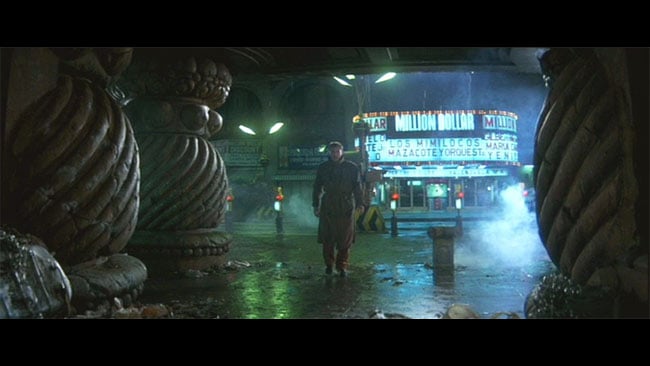 Blade Runner. The pillars were added; otherwise, it's just an LA street with light, water, steam, and a few comparatively minor props (which were reused a lot)

The dark is rising: As a reminder that not everything is done in post these days, Phil Rhodes looks at the problem of getting darkness just right in your productions.

As we're required to say on the internet these days, there's one simple trick behind making a film look upscale and expensive. You fly the cast and crew to an exotic location, build an enormous set, hire and costume a large number of extras, and to top it all off with an enormous explosion. Well, okay, it's relatively simple, but it's not a trick: that’s just doing something enormously spectacular then pointing a camera at it. Better yet, several cameras. From a helicopter!

For the overwhelming majority of us who will never work on that sort of production, there are more accessible tric... er, techniques, such as those mentioned in the title of this series: dark, wet, and smoke. The term is a quote from an interview with Ridley Scott about the production of Blade Runner, which was not a cheap production at the time, but which refers to three things which are available to even quite modestly-budgeted filmmakers. They sit at the point where cinematography and production design meet, and like many physical effects, they can be very powerful.

Darkness is easy, right? You just don't point lights at the fire hose reel, emergency exit sign, or whatever other aspect of the location offends the period setting of your costume drama, and they're invisible. Well... no.

There are several things which can complicate attempts to have things fall off into invisibility, and we'll go through them here. Get it wrong, and it only takes a quick perusal of the short films section of YouTube to find someone who was so desperate to keep the audience from seeing something that the scene isn't so much shadowy as simply underexposed.

Light needs to be placed carefully – not omitted entirely. The common modern approach of large, soft sources makes it easy for actors to go wherever they like, but it's very difficult to control. Sure, large sources can be flagged, but the size of the required black solids expands with something like the square of the size of the source, and achieving a selective blacking-out of specific parts of the scene becomes very difficult.

In the director's commentary for Equilibrium (which achieved a lot with not much), Kurt Wimmer discusses the use of shadow falloff to make this location acceptable

So, we end up needing hard light, so it can be controlled. Shooting dark and shadowy scenes doesn't require fewer lights, it requires more, so that the areas and objects we do want to see can be selectively made visible. Because of this, directors must be precise about blocking in a way that many currently aren't. Wandering cast members may find themselves inappropriately lit or in complete darkness, and creating a zone of flattering light for the cast to work in (where that's appropriate) becomes complex, because this often softer light must not spill over and ruin our carefully-created shadows. Errors become more obvious when they happen against a background of deep blacks.

Creating impenetrable shadow might generate a scene we'd generalise as being “dark”, but it also doesn't require less powerful lights – often, quite the opposite. If there's any uncontrollable ambient light in the venue, including unwanted bounce from our own lighting, we must overwhelm it, so that when our desired areas are well-exposed, the stuff we don't want to see is sufficiently underexposed to read as black, especially if it's something that's period-inappropriate or otherwise absolutely must not be seen. The need for sheer power can make it difficult to use otherwise-desirable LED lights. While there are some high-power options, many current models top out at a couple of hundred watts, and it often just isn't enough to create the required contrast over large areas. 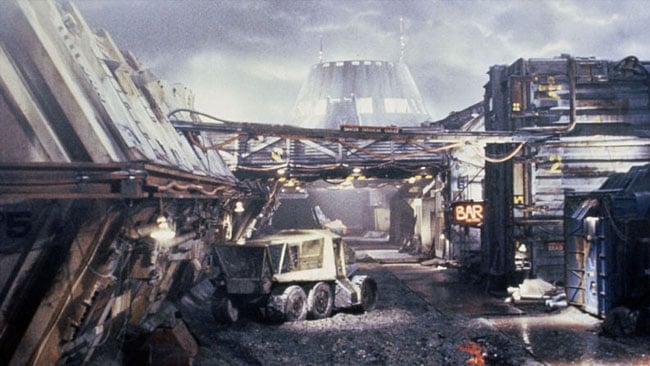 In this behind-the-scenes shot, the colony miniature built for Aliens looks like a good miniature

The other thing about bouncing light is that there's naturally a significant sensitivity to the colour of the object it's bouncing off. Modern interiors are often finished in white or at least pale colours. Attempts to have them fall off into satisfyingly contrasty shadows may be frustrated by the sheer amount of bounce that goes on. That's not to say that carefully-controlled darkness can't be used to spruce up that sort of space, but there's certainly no complete immunity to the nature of the location. This is where rolls of black fabric come in. Duvetyn is the classic term, but anything fireproof can be used to reduce inappropriate bounce and hide objects which are already almost dark enough to disappear.

In the final grade and lighting, it looks like reality. There is some argument that this is, as we discussed, just a bit underexposed, but that may just be the modern grade

The amount of equipment required to support and control light also goes up. More lights means more stands, obviously, but it's much more likely that the lights will be fresnels – which are heavier and more expensive – and that each of them will need barn doors, flags, and other things. Rigging lighting to highlight specific things may also create a need to rig both lighting and cables out of sight, which can mean relying on things like wall spreaders or the safety-critical suspension of equipment from any preexisting overhead support point.

What'll definitely increase is the setup time, or possibly the crew requirement, or some combination of both. Firing a 10K through a silk and trimming in a backlight is one thing; individually highlighting every actor and pot plant is another, even on a fairly modest scale. Last-minute changes to blocking and framing can require quick re-rigs, and there's often a need to keep carefully-positioned grip equipment just barely out of shot. It demands careful operating, and in many locations, practical limitations can make shots which encompass large areas, as with handheld, Steadicam and gimbal, time-consuming to set up.

To some extent, these are not specifically the problems of hiding undesirable things in shadow. They're the problems of hard lighting, or at least lighting hard enough to be sufficiently controllable to create deep shadows. Whether hard light went out of fashion because of the way it looked, or because it required more precision of blocking and framing than modern approaches can stand, is academic. Despite these difficulties, though, if we're looking for ways to creatively obscure things that don't look very good, it might be a good idea to blow the dust off our fresnels and flags and reacquaint ourselves with the wonderful things they can do.