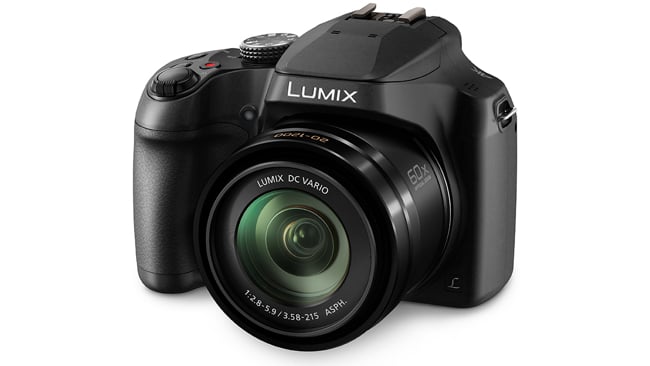 It’s not all GH5. Anyone in the market for a 4K stills photo and 4K video point and shoot camera with telephoto capabilities should perhaps take a close look at the Panasonic Lumix FZ80 —especially when you consider it will retail for less than $400.

The FZ80 is in fact an update of the company’s existing FZ70 and houses the same 60x DC VARIO superzoom, but includes a new 18.1-megapixel 1/2.3-inch High Sensitivity MOS sensor.

The lens itself is capable of 20mm wide-angle for landscapes while the 60x optic equates to a super long 1200mm. The maximum aperture range is f/2.8-5.9.

There’s an interesting 4K Live Cropping function, familiar to top-end outside broadcasters, which allows you to pan and zoom in HD from the 4K frame. This is complemented by a pair of high speed video modes: 1280 x 720 video at 120p and 640 x 480 at 240p.

The 3-inch rear LCD is the same size as its predecessor but is now a touchscreen with a resolution of 1.04 million dots (up from 460,000) and there’s a superior 1.17 million dot electronic viewfinder. Panasonic says this is five times sharper than the one on the FZ70.

A ‘Post Focus’ feature allows you set focus points after capture. Selecting several focus points via the Focus Stacking feature offers the ability to create a final image with an increased depth of field.

There’s built-in WiFi for sharing to mobile devices. With no onboard storage, files are recorded to SD/SDHC/SDXC cards.

Current release date, as with the GH5, is March.