The ENG-style camera with the heart of a DSLR 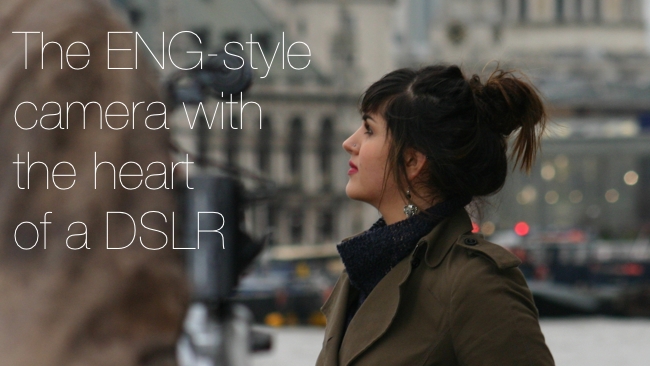 While it may seem a little unfair to compare the NEX-EA50EH to much more expensive full-size ENG cameras, that’s unmistakably what it’s trying to be.  It appears to be a pretty genuine attempt to create an option somewhere almost exactly in-between a small, handheld camera and Sony’s PMW series ENG cameras, using a large sensor of the type that you’d usually see in a DSLR rather than a “pure” video camera. (Note that when we say “ENG” here, we don’t mean to imply that the camera is meant for news gathering. We’re just saying that it has the same overall shape and style as an ENG camera. Sony tells us that the main market for this camera is likely to be covering weddings and events - although as you’ll see, it’s perfectly adaptable to other roles as well).

The supplied lens has manual zoom (with a considerable amount of zoom extension, although internal focus) and focus is servo-actuated from an infinitely-rotating ring. Iris control is on a multi-purpose rotary encoder on the operator side of the camera. What would ordinarily be a lens grip is actually part of the camera, producing an unusual but not uncomfortable operating position, with the zoom and focus rings well forward of the grip. Given the short flange depth of the E mount, it would be tempting to talk about an adaptor to other lens types, although most ENG zooms would struggle to cover the APS sensor, at least with the doubler engaged. In any case, the purpose of this camera is probably not to be paired with a very expensive piece of glass, and the lens ergonomics are certainly a lot better than many other cameras in the price range.

The camera uses Sony’s now venerable NP-series batteries (they supplied an NP-F770), which are perfectly OK for a camera with no mechanical recording deck. There are XLR audio inputs with phantom power and real level controls, although the in-vision audio metering lacks a numeric scale or calibration marks, which is annoying and increasingly common on cameras at all levels. There is HDMI but no SDI connectivity, and while it’s tempting to think that this is what the unmarked cover at the right-rear of the camera might be for in the future, it is actually for Sony’s optional HXR-FMU128 SSD drive that’s been available for three years and is intended as a backup for the main recording. 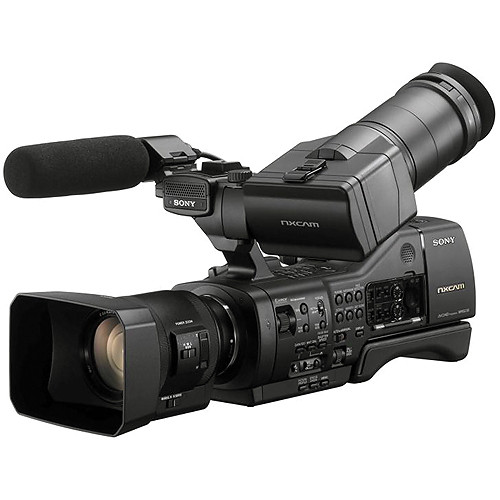 So, does this unusual combination of DSLR and ENG-style elements actually succeed as a camera?

Well, pretty much. It's a lot of camera for the money, certainly; I'd expected it to be £1-2k more expensive, which may be a benefit of basing a documentary-style camera on DSLR technology.

Ergonomically, it's certainly vastly better than a DSLR. Despite the slightly unusual positioning of the grip rearward of the lens, the controls do all fall rather comfortably under the right fingers. It's similar enough to the full size cameras I'm more used to that all the usual controls quickly became automatic, although the focus ring could be a bit better differentiated from the lens barrel. It is possible to do reasonably precise focus pulls, and although almost nobody ever wishes for servo focus, it's well-implemented in this camera. Programmable white balance and gain selection are in exactly the right place at the lower front. The iris encoder is shockless, with smooth in-shot iris pulls possible with a bit of care.

Anyone looking to use this featherweight camera with an existing large-scale broadcast tripod will want to make very sure that there's an option to dial the spring balance down really, really low. I paired it with a Vinten Vision 3, on the basis that, well, the camera looks a bit like an ENG camera, but that's really more than you need. You don't need to spend £1000 with Sachtler to support an EA50. With the option to flip open or simply remove the viewfinder loupe, you can operate quite conveniently off the monitor and it's all very satisfactory. The other thing about the monitor is that while it's a touch screen, it's also possible to control everything using the lower of the two rotary encoders on the operator side. This is better: it's more reliable, removes the need to keep flipping the loupe open and obviates fingerprints.

Off the tripod, I'm not quite so enthusiastic. Broadcast cameras put the shoulder pad under the handle, but they're invariably used with a quick-release plate which bridges the pad and allows both it and the tripod mount to be in the same place. Lacking that option, the EA50EH puts the shoulder pad at the back. It works better in that configuration without the loupe, because you can then move the shoulder pad forward to make the viewfinder work, and it therefore isn't so front heavy. In either case, though, this isn't so much a shoulder mounted camera as a handheld camera which happens to be in contact with your shoulder. I'm not really sure whether the result is easier on the right arm than comparably-inexpensive handheld cameras, although it's probably more stable.

"...subjectively almost as good as the next level of camera up, like F3 pictures in similar circumstances"

As to the pictures, the miserably grey late-January weather meant that we gave it a bit of a severe test, shooting both the day and night exteriors one might reasonably expect to find on the corporate or documentary jobs for which this camera is probably ideal. After dark, we threw in 30dB of gain, and, well, I was pleasantly surprised!

It looks subjectively almost as good as the next level of camera up, like F3 pictures in similar circumstances. A damp London starts looking a bit film noir at night, until you go to Piccadilly Circus, which looks like it's making a brave stab at Blade Runner. The resulting image is, of course, visibly noisy, although the EA50 does quite well even with an effective sensitivity over 10,000 ISO. The in-camera compression doesn’t help in this specific scenario, as the noise produced by five stops of gain is a lot of entropy to encode, but you could easily put an external HDMI recorder on it if you were doing a lot of low-light work. The handheld images are greatly assisted by the nice wide-angle image available from the 18-200mm lens on such a big sensor (whereas an 18mm wide end would certainly not be adequate on a 2/3” camera).

So, as I said, this is a lot of camera for the money. The balance is the only real complaint, and that's only a problem if you're expecting it to feel exactly like a Betacam. It's a crowded marketplace at that sort of price point, and you would need to be fairly sure that it offers enough advantages over a DSLR in your particular application to justify the money - but remember: for a DSLR to be usable, you have to spend an awful lot on extra rigging and supports. Bearing in mind that the next option up is twice the price, I'm sure that there are plenty of situations in which the NEX EA50EH will be very welcome.

Here's some footage that we shot on the South Bank of the Thames, and in Piccadilly Circus, London (There's no audio).