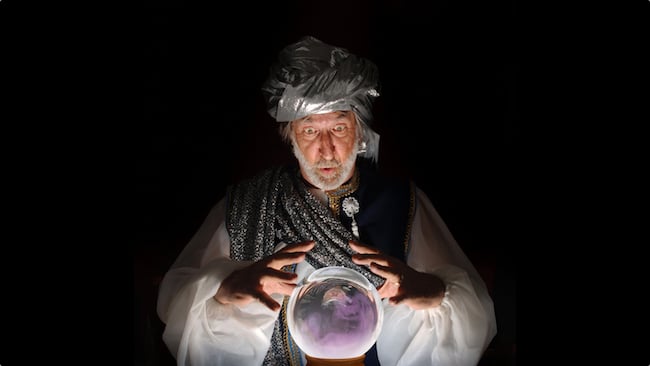 The veils part and what do we see? Oh...

Roland Denning dons his soothsayer robes for a not entirely serious look at what may happen in the video industry in 2017.

Predicting the future is, as we all know, almost impossible but here at RedShark we are privileged to have some very special assets: a vast database of all the trends and developments in film and video over the last four years, specially developed algorithms and the massive server farm, hidden deep in the caves beneath Red Shark’s Hampshire base, to churn the data. We cannot guarantee all these predictions will come true, but we have little reason for doubting them.

The vinyl revival continues but leading analogue hi-fi buffs insist on finding ways to avoid the degradation that occurs towards the end of a record. Wax cylinders are revived as a rediscovered ‘constant linear speed’ system. Disputes break out between those who favour valve-based amplification and purists who insist that only purely mechanical horn-based gramophones maintain the true integrity of the cylinder system. Aficionados describe sounds produced by the mechanical systems as ‘breathtakingly organic’ and ‘free from all electronic and digital artefacts’.

Sales of wax cylinders are reported to be ‘record breaking’.

Arriflex announces that following the principle that it is the quality of the pixels, not the number that count, all future Alexas and Amiras will have a newly developed, smaller, 1920 x 1080 sensor with ‘the world’s finest pixels’. Cinematographers who have seen the prototypes praise the beautiful skin tones and the fact that the ‘clinical sharpness’ of digital video has been avoided without the use of filters or vintage glass. In a contrary move, RED announces new 12k and 16k sensor cameras will be available ‘soon’.

Following the success of HDR, both Amazon and Netflix announce the advent of Deep Focus Ultra High Definition promising that ‘not only brighter and darker pixels but every pixel on your screen will be sharp — no more fuzzy backgrounds!’ There follows a huge spike in demand for 2/3” chip cameras and 12k HMI lamps. DSLR sales slump but high demand causes the price of Super 8 film cameras to soar.

RED withdraws its promise of 12k and 16k cameras as future models will be based on a new 20K chip. Availability is promised to be ‘really soon’.

Lytro announces a new camera able to record ‘everything in an entire studio at once’ claiming it makes all other cameras immediately obsolete. When critics suggest its power and data processing requirements are ‘staggering’, Lytro replies by stating ‘we never said it would be portable’.

RED announces that its new 30K sensor will be available ‘really really soon’.

Apple counters rumours that it had abandoned the professional desktop machines by introducing a radical new MacPro. A slim and elegant decahedron ring, it is soon nicknamed ‘The Crown’ and described as the first wearable desktop computer. Equipped with no internal hard drives but 10 Lightning ports it surprises pundits by running not on MacOS X but on iOS 11. An initial teardown by iFixit reveals that it is constructed out of 10 iPhones stuck in a circle. Apple claims Final Cut Pro 10.4 runs on it ‘super fast’. Unfortunately it is not compatible with any other NLE systems.

BlackMagic, realising that there are some editors who have not switched to Da Vinci Resolve even though it is available free, are now offering to pay commission to anyone using it. Avid responds by raising its prices.

The analogue revival continues and two Oscar nominated features are produced on 3/4” U-matic. The filmmakers claim analogue tape has ‘organic nuances’ that no digital system can match. Three machine tape edit suites command premium prices with analogue evangelists claiming that ‘linear systems’ match the way ‘our brains are wired to tell stories’ whereas ‘non-linear systems’ are ‘just way too random’. This ‘revolution’ is short-lived when it is discovered that there are no longer any manufacturing facilities for magnetic tape, the last factory having devoted its final output to making edge-numbering tape for Ken Loach.

In an attempt to capitalise on the wax cylinder audio revolution, the clockwork Bolex H16 and the original clockwork Nagra 1 are re-launched. Following a world shortage of lithium and spiralling energy costs, clockwork motors become the preferred energy source. DJI announces the first clockwork drone.