Christmas gifts for the camera crew 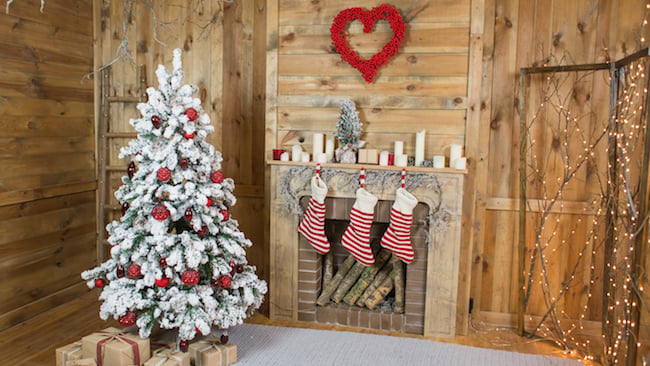 If we're lucky, that's a universal lens mount under the tree just there

Christmas replay: Throughout history many cultures have historically found several good reasons for a feast, with associated drinking and gift-giving, in the middle of a long, grim winter. Phil Rhodes has found his own: the desire for new camera kit that works the way it should do. Here begins his fantasy wish-list of the things he'd like to find gift-wrapped under his tree in the near future.

Our purpose here is to dream big, but crucially, none of this is strictly impossible. A lot of it is quite unlikely, due to practicality or, more often, politics, but still: if nobody ever asks for these things, they'll definitely never happen.

Present one: a universal lens mount

The idea of a universal lens mount hardly bears further explanation. It's long been common, even fashionable, to use lenses designed and made long before the camera in question was even dreamed of, but that only helps lens owners get more out of their investment. It doesn't encourage lens manufacturers to abandon vendor lock-in. What does encourage them to do that is the expanded potential market. Lots of non-Canon cameras use EF mounts, for instance; there's no reason for Canon to object to this market for their glass.

Sony made a brave stab at universality with their FZ mount, which is large enough in diameter that even very short flange focal distance designs, particularly Panasonic's micro four-thirds and Sony's E mount (found on the FS7 and FS5), can sit inside it. This makes FZ a better bet than something like micro four-thirds, which is short enough to be adapted to more or less anything but can't be adapted to Sony E and isn't as physically robust as FZ or PL, a consideration we'll discuss more below.

First there are issues of coverage, which is fairly straightforward: either a lens projects an image large enough to cover a sensor or it doesn't. We can sometimes use optical correction for image sizing, or for issues associated with three-chip cameras, but coverage will often be the arbiter of suitability, regardless of mount compatibility.

The second problem is the electronics. This principally affects micro four-thirds and, crucially, Canon EF mount lenses, which are practically unusable without compatible control gear. Companies such as Sigma and Tamron have reverse-engineered Canon's lens control protocol, and there's really no reason for secrecy other than a forlorn attempt to continue vendor lock-in. There isn't much value in the actual design work; anyone can come up with a reasonable design for this. What's far more important is reliable compatibility, especially given how easy it is to affect consumer confidence when things are flaky.

The third issue is mechanical strength. A B4 mount on a conventional EFP or ENG camera is a breech-lock type that's part of the whole ergonomic design and must withstand large loads without causing problems with optical alignment. PL mounts with even bigger, heavier cameras and lenses such as an Amira with a Canon 17-120 or Fujinon 19-90 involve even more stress. No still photography mount (Canon EF, Sony E, Nikon, Micro Four-Thirds) is designed to deal with this, and yet an FS7 might approach the same sort of mass when fully rigged.

Sony's FZ design solves all of this, and might be a candidate for a universal lens mount. It's a bit big, which might make manufacturers of the smallest cameras balk, but it's wide, shallow, and breech locking. Go on, Sony. Propose it. Release the drawings. Again, anyone can come up with a suitable design; what matters is that everyone comes up with the same design. It may seem impossible, given the corporate interests involved, but then again, ten years ago there were three battery mounts and we more or less seem to have solved that.

I only have one pair of hands, and they have a load limit, especially after setup fifty and hour sixteen.

Take a Sony FS7. It isn't a heavy camera, but let's say we've put it on a sturdy baseplate with a rod system, a chunky PL mount adaptor and an equally chunky PL lens. Maybe an anamorphic lens. Maybe a zoom! Add a V-mount battery plate to the back rods, a seven-inch monitor-recorder, two radio mic receivers and a video transmitter, follow focus gear and a mattebox to accommodate our widest primes. Stack a pola and a promist. The result is an outfit capable of competing with the best in the world, in many ways, but one wherein the camera itself is almost an afterthought in terms of both financial value and weight – and I'm sure we can all think of half a dozen more things to go on there if we really wanted to make a point of maxing it out.

The thing is, if this were a big-budget show, that camera would ride around on a dolly all day, even if the dolly were being used only to position it. But since we're shooting FS7, as opposed to Alexa or F65, it's pretty clearly not a big-budget show, and that bulky outfit is likely to be perched on something approaching an ENG tripod. In operation, that's fine: something like the Miller ArrowX 3 that we enjoyed so much recently will handle the situation with ease. The problem is that adjusting height on such a tripod requires us to take that camera in a single hand, flip three latches open, lift the camera, and close the latches again. Sounds simple, but it isn't, especially with a recalcitrant floor covering such as carpet that won't let the feet slide.

This is in no way a criticism of Miller's excellent product; in fact, the desire we're about to express stems from a feature on some of their lightweight tripods, where each leg is a single telescopic tube. A single control releases all three legs to fall into place. The legs we reviewed in concert with the ArrowX 3 head enjoy the refinement of having the latches for both extensions of each leg in the same place. It's therefore easy to pop both the latches for one leg in a single operation, but that's still three things to open and three things to close every time we want to adjust height.

This is certainly a very specific bit of minutiae, but it affects people in the cheap-but-demanding part of the market which represents most actual camerawork. Changing height is such a common operation that the total time saved by the convenience we're discussing would be huge. OK, so building a set of legs where a single control latches and unlatches everything at once, on a setup where each extension is made up of two parallel tubes, is a mechanical challenge of some severity. It doesn't seem as if it ought to be impossible, though, even if we have to put batteries in each of the leg joints and do it with servo-actuation and radio control. A bit of string running through holes in the leg spacers, maybe? Trained, eager gophers? I'll take it. I'm desperate.

It's going to be difficult to publish this piece without someone accusing me of sitting three feet from a camera for which I'm anxious not to have to buy any more extremely expensive CFast cards. This is true, but I think what we're about to discuss does have a slightly broader relevance.

Modern recorders, such as those made by Convergent Design, Atomos and Video Devices, are things of great beauty. Products of a stratospheric improvement in both display technology and storage, there's been healthy competition on both price and features leading to very certainly the best picture recording technology that there has ever been, and it fits more or less into the same physical space that a mere seven-inch monitor once occupied.

The problem is that historically, it's probably only a minority of shoots which actually need a seven-inch monitor. Early recorders, such as Convergent's seminal NanoFlash, were sufficiently tiny to be velcroed onto almost any flat surface, notwithstanding the tendency of camera manufacturers to omit all flat surfaces in favour of attractive, sculptural curves. Blackmagic's Hyperdeck Shuttle was designed essentially like a chunky disk caddy, with both its largest surfaces free of connectors and controls. The company even make a mounting plate for it, although since that only puts quarter-inch threads on one side it still isn't as easy to mount between tripod and handycam as perhaps it ideally could be.

Better, though, would be a frankly fairly obvious option: take a recorder, put a male V-mount on one side, a female V-mount on the other, and slap it between the battery and the camera. This trick was and remains beloved of radio mic receivers and video transmitters simply because the battery mount is the nearest thing we have to a standard physical interface. That was true even when PAG and Anton Bauer gold mounts were more common than they are in today's increasingly standardised V-mount world. Even better, the recorder can take power from the mount, reducing cabling.

It's probably possible to make the device I'm begging for here with a Hyperdeck Shuttle (Still available in its second iteration for a mere £330 or so), a couple of V-mount plates, and a couple of hours in the shed. The Hyperdeck Shuttle is the example here simply because of its physical layout, but it's in desperate need of a refresh. Its support for signals beyond 1080p at conventional frame rates is minimal. More capable recorders typically have a display, such as Blackmagic's Video Assist or the Atomos options, and Atomos's Ninja Star is optimised for weight and size for use on drones. A Hyperdeck Shuttle 4K with a male V-mount on one side and a female V-mount on the other would be a fine thing indeed. Let's just ensure there's LANC control sufficient to integrate it with the rest of the rig.

Read the second part of the feature, where Phil continues his list, here: More Christmas gifts for the camera crew.