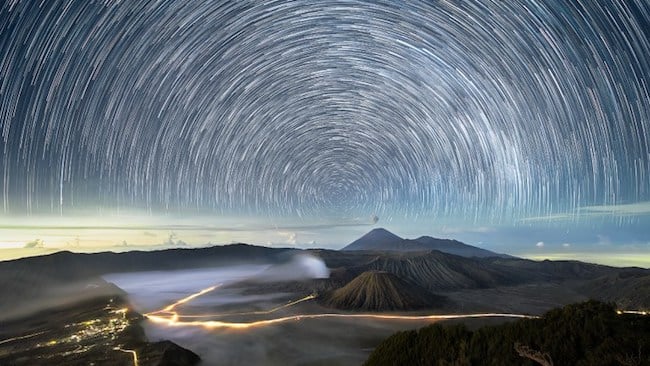 126 images of Mt Bromo in Indonesia

Malaysian photographer Grey Chow has a passion for night landscapes and a gift for capturing them.

Grey Chow’s work has been splashed over the BBC in recent days, so there’s a chance you might have already seen it. If so a) it’s worth looking at again b) it’s worth giving his own website a bit of traffic love by heading to his own galleries at http://greychow.com and c) it’s interesting the way he does it.

“I was making a timelapse photograph, with at least a two hour shoot,” he writes of the above pic. “Though I am actually framing the shoot with a star trail composition in mind, in the end I have a timelapse video and a star trail photo: one stone kill two birds.”

You can see what he means via the video below.

The star trail image is blended together in Photoshop, decreasing the opacity for each layer to get the ‘meteor’ effect. This is then merged with a pre-dawn ‘base layer’ photo, which also uses a -2 exposure to recover the overexposed area. There is then a lot of clean up work in post: the details which you can read here.