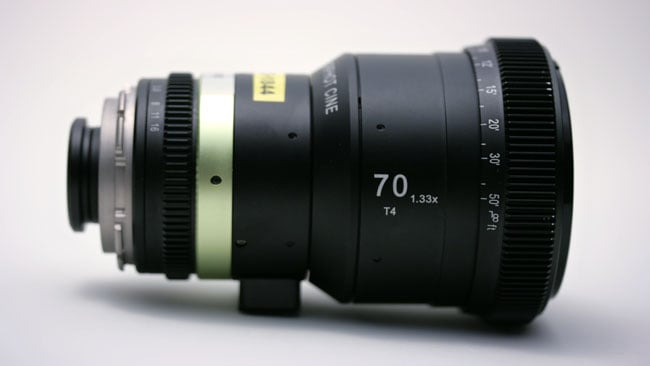 Anamorphic lenses hold a certain fascination. Whether that's down to the lenses themselves or just the productions they've been used on is another matter, but anyone whose formative cinematic experiences included the sci-fi greats of the 1980s will remember a lot of very well-photographed productions which used them. Doe-eyed nostalgia aside, there's always been a drive to find interesting approaches which yield interesting results, provoking interest in things like Cooke's reborn Speed Panchro series. We are, if anything, in a post-excellence world; sterile and artefact-free pictures are now easy enough to be boring. Interest in anamorphics, therefore, stems both from nostalgia and because they're another tool in a box that never seems full enough.

The nostalgia thing is perhaps something of a red herring, because the sort of anamorphic artefacts people mention aren't so much a consequence of anamorphics in general, as a particular set of anamorphics in particular. Panavision's C and E-series lenses are really the definers of this particular trope, with their pronounced horizontal blue flare. There are plenty of other options (Cooke, for instance, or ARRI's master anamorphics) which produce less of a horizontal flare or, at least, without such a strong blue colour tint. To date, though, there has been a significant problem with anamorphic lenses of any stripe: they are titanically expensive. 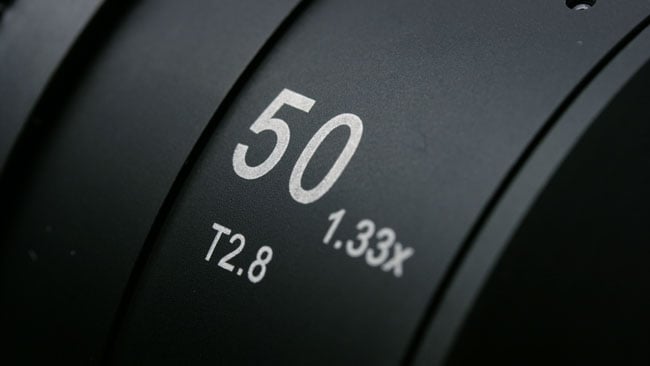 The people who designed SLR Magic's Anamorphot system certainly understood what people were looking for in an anamorphic lens, at least in terms of character and, to some extent, in terms of price. The three, at 35mm, 50mm and 70mm, work out at around £5300 each (plus VAT) when purchased as a set, which will strike people used to DSLR lens prices as expensive. It is, however, put firmly into context by Cooke's Anamorphic /i series which run perhaps $30,000 apiece. Yes, that's thirty thousand dollars for a single lens; even rental is often prohibitive. This differentiation is so vast that it necessarily raises questions about how the Anamorphot series works and what, if any, compromises have been made in pursuit of that elusive blue streak. 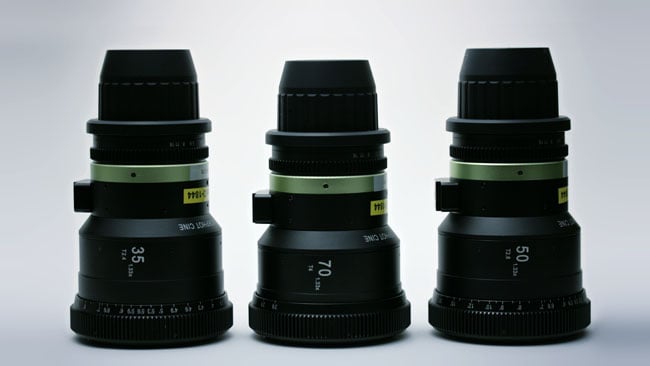 The 35mm, 50mm and 70mm lenses are similar, though not identical, in size.

The lenses on review here are, at a technical level, a combination of one of SLR Magic's prime lenses, a 1.33:1 anamorphic converter (there's also a 2:1 option), and the company's rangefinder attachment. This latter device is a crafty way of solving a practical problem with focus. Ordinarily, strap-on anamorphic adaptors require focussing separately to the prime they're modifying, which is naturally a massive complication. The rangefinder device acts as a variable diopter, so that the prime and the anamorphic adapter can both be set to infinity and the rangefinder then handles all focussing. 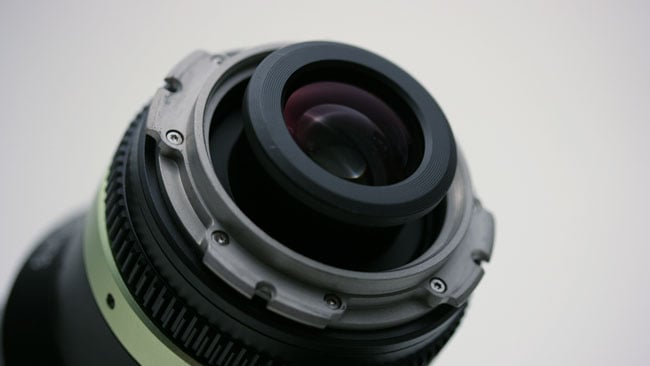 The lenses come in PL mount, although the back of the lens is short enough to suit EF-to-PL adaptors.

That's dealt with internally on these lenses, though the result is a big stack of glass, with some performance inevitably sacrificed as a result. One benefit of the construction is that it places the focus ring right at the front, so the sizing and layout of the three lenses is reasonably consistent. It isn't identical, but the focus rings end up within half an inch of the same position. The whole assembly ends up being externally focussed and there is perhaps around three eighths of an inch of extension between close focus and infinity. We should acknowledge here that the 70mm lens sent by UK distributor Holdan seemed reluctant to achieve sharp focus regardless of distance, possibly due to having been mishandled in shipping; naturally, this won't be normal. 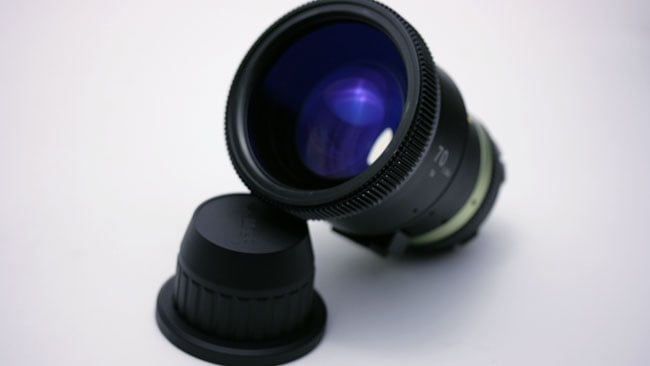 The business end of the 70mm.

Overall, the lenses are reasonably compact for their speed, at T4 for the 70mm, T2.4 for the 35mm and T2.8 for the 50mm. This may not seem fast by modern standards, but again, these are anamorphic lenses and fairly compact ones at that. As with many complex lenses, they perform considerably better stopped down; this tendency is more pronounced with anamorphics, so many people will prefer to shoot the 70mm at f/8. The question on everyone's lips, though, is whether they produce the sought-after flare characteristics – and boy, do they.

Flare for the dramatic 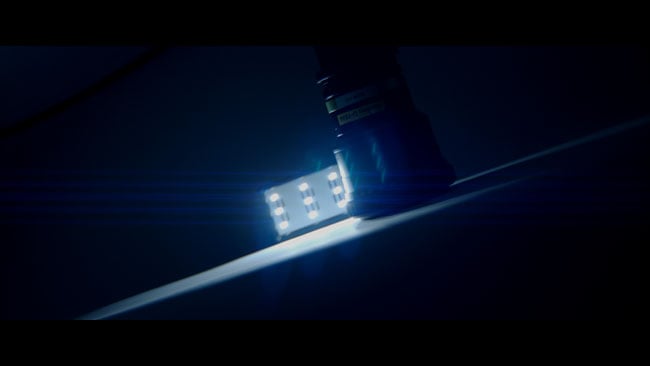 Here, the Anamorphot lens flares in response to an Aputure AL-9 LED light. This is the 50mm wide open.

There isn't really a formal terminology for describing lens flare, but a pronounced blue horizontal streak appears through light sources in frame, accompanied by an attractive collection of round and angular shapes. All of the lenses produce straw-coloured striation when a light source is near or beyond the edge of frame, with the 50mm allowing the streaks to break up into rainbows. There is a golden or bluish glow around light sources. Ordinarily, this degree of flare would be something to criticise in a lens, but that's sort of the point. There are downsides; not only do the lenses flare blue, they also glow and veil blue given half a chance. They'll keep a crew busy with flags and bits of blackwrap stuck to the mattebox. Such are the side-effects of all those optical fireworks.

Purely as lenses, the field of view is wider than one would expect horizontally, of course, since more picture is being optically squeezed down to fit the sensor. They all exhibit some degree of barrel distortion, particularly the 35mm short option on which it's quite pronounced. The focus artifacts follow this distortion. The fault of early, mid-twentieth-century anamorphics, where the degree of compression would alter in out-of focus areas, is largely absent. It was called 'mumping', because it made soft-focussed people look fat in the face. It's minimised here possibly because the degree of compression is much milder than those old 2:1 lenses, rather than by any particular brilliance of the optical design.

The only other technical feature to mention is the use of an elliptical aperture at the back of the lens, behind the moving iris blades. This aperture takes the 2:1 shape of a more traditional anamorphic lens and it's probably this, more than the optical compression of the lens, which creates the elliptical out-of-focus artifacts we see in associated footage. This is perhaps a slightly questionable choice, as it must necessarily reduce the maximum aperture and it can be slightly visible in the way flares behave, causing some to appear only when the light source is reasonably central. 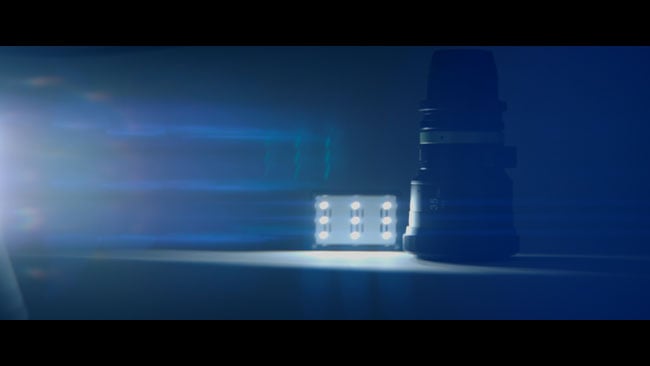 Call me J. J. - a second AL-9 is positioned near the edge of frame, provoking spectacular optical fireworks.

Manufacturers of 2:1 anamorphic lenses have been known to opine, rather dismissively, that a 1.33:1 lens is neither one thing nor the other, being not anamorphic enough to produce the sought-after look, but still requiring the expensive optical engineering. This criticism, at least as applied to the SLR Magic lenses, seems a bit ungenerous: they certainly produce pictures with the most often sought-after characteristics of anamorphic lenses, albeit relying on that elliptical aperture plate to help with the focus effects. The flares are easy to create and easy to overdo; there will often be a need to control as much as to deliberately provoke them.

Flares aside, it is possible to shoot these lenses for a clean look, although it's certainly extra effort. They're not blazingly sharp and the resulting picture is rather classical and historic; it would suit a costume drama, though the blue flares possibly wouldn't. The image will not be appropriate for every show and over five thousand pounds a lens is a lot of money for special projects, so they'll be a rental. Still, assuming there's a camera or monitor with a 1.33:1 desqueeze function available, lots of people will doubtless have lots of fun with these on short films and music videos where the unique look can be fully embraced. Or if they're JJ Abrams.