Why the Sony F65 is still on top 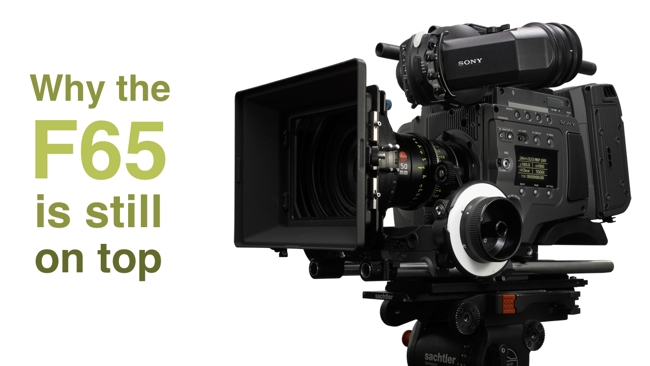 With Sony's F55 shaping up to be such a good device, it's reasonable to wonder about the future role of Sony's flagship camera, the F65.  We spoke to Richard Lewis, Product Specialist for Cimenatography at Sony Europe, to get some definitive answers

What would make someone buy an F65 and not an F55?

The F65 is Sony’s flagship 4K camera and its 20 megapixel 8K sensor is designed for filmmakers looking to shoot at the absolute pinnacle of image quality.
The PMW-F55 is aimed at production companies, directors of photography and filmmakers looking to bring the power of 4K into their content from short films and music videos right up to high-end drama production.  The F55, and indeed the F5, both use Sony’s XAVC open format, which bridges the gap between 4K raw and HD workflows and opens up the possibility of 4K for broadcst in the future. In short, the cameras complement each other, but address different needs and budgets.

How many F65s have now been sold (I understand that it was around 400 in March last year).

Unfortunately I’m not able to share any more sales information, but given some of the global blockbusters which have been filmed using the F65 since it started shipping in 2012, it's fair to say that the camera has taken Hollywood by storm!

Can you list some recent films that have been made with the F65?

There are over 30 commercials and feature films currently in production which have shot on the F65, most notably Oblivion - the upcoming sci-fi movie shot by Joseph Kosinski,M. Knight Shyamalan’s After Earth and Amma Asante’s Belle shot by DoP Ben Smithard.

Is it easy to mix footage from the F55 and F65? Can you transfer set-up information between them?

The cameras match in terms of colour and dynamic range, so yes, it is quite easy to mix footage from the two.  While you can’t transfer set-up information, the default settings for the two cameras match.

What is meant by saying that you can have an 8K output from an F65? Is this the raw output that needs Debayering? What is the actual resolution once Debayered?

Yes, this refers to the raw output of the F65, buta new RAW viewer is in the pipeline which will have at least a 6K output, even from existing RAW files.

What is the true dynamic range of raw output?

The true range of the raw output is at least 14 stops.

Sony quotes a 20 megapixel sensor for the F65 but 8K is 33 megapixels? Is the 20 megapixels the resolution after debayering?

The 20 megapixels quoted actually refer to the number of photosites on the sensor itself. Interpolation then allows us to increase the number of output pixels for 8K to 33 megapixels.

What is the advantage of a mechanical shutter in the F65 over the F55's electronic global shutter? Is it mainly dynamic range?

The main advantage is that a mechanical shutter gives exactly the same motion blur as a film camera, giving the shots a cinematic quality. In addition, it also ensures the retention of full sensitivity of the sensor.

Sony makes its own sensors. What are the advantages that this gives Sony, compared to the companies that don't make their own?

Fundamentally, it’s a matter of quality control - we control the whole camera and subsequently the resulting picture quality and consistency of images between cameras.  Close liaison between the chip design and camera design team means we can achieve an optimised picture quality, so the quality of the sensor matches the quality of processing.

Thanks to Richard Lewis and to Sony Europe for spending the time with us. Our F65 coverage continues here with a look at the UK's first true 4K cinema production: Belle