Astonishing low light footage from the Sony A99 II 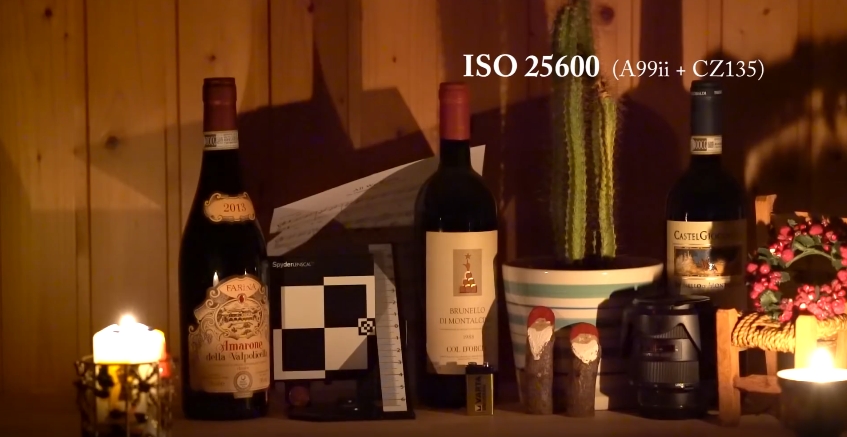 How's this for using the natural light?

A new YouTube video highlighting the low light performance of the Sony A99 II shows just what modern low light kit is capable of: the above video grab is from a scene lit by two candles and two candles alone.

I once got into a rather awkward exchange with a very prominent and senior cinematographer over the idea that lighting things with candles, Barry Lyndon style, was best done with a bit of reinforcement from conventional lighting. Even if we're Stanley Kubrick, and even if we have f/0.7 lenses, and even if we have dozens upon dozens of four-wicked candles and an army of willing crew to keep them going all day, if we shoot that on a digital camera then all of the candle flames will be clipped out to white, which isn't very attractive.

Now, the attitude that 1975's Barry Lyndon is anything other than a masterpiece of cinematography is not allowed in modern discourse, and I can hear the gurgling sound of flamethrowers being filled as I type, but the point remains: light a scene with candles, as is now much easier than it was in Stanley's heyday, and you'll get a lot of clipped flames in your pictures. Fire is orange, not white.

So, demonstrations such as the Sony A99 II footage recently publicised by YouTube user Bramans (below) are useful as tech demos, and I'm as enthusiastic about all this new capability as anyone. Okay, it's a locked-off shot of a static subject, so if there's any super-aggressive noise reduction going on, it may be difficult to see. Okay, we've talked before about how it's slightly dubious – well, no, absolutely insane - to make critical picture quality assessments based on YouTube videos at 35 megabits per second. Even so, it's difficult to complain too much about the unprecedented ability of cameras such as the A99 II and the A7S series to shoot pictures in circumstances where we could more or less sit down and count the photons off one by one as they dawdled through the lens.

With this in mind, it's clear that, for a similar level of grain, digital video is now capable of at least a couple of stops more sensitivity than film ever was. Kodak's short-lived 5289 tungsten stock, rated at EI 800, was about as fast as many modern digital video devices, but 800 is a point at which the latest cinema cameras can often produce very clean pictures, and 5289 was nothing if not grainy. The purpose of this is not to shoot by candlelight, however. The purpose of high sensitivity is to be able to use smaller, easier-to-handle, lower-power lighting devices that require less crew, less transport, fewer generators and smaller cables. Gain a stop, and your 575W HMI might become a big 250W LED, but you still need the light, the stand, the flags and the diffusion, the gels and the crew and the knowledge of how to use it all.

Sensitivity is great, especially if we're out in the field, shooting by the light of things we can carry, or shooting by whatever light happens to exist. Nobody in their right mind is going to turn it down. News crews shooting a warzone rejoice every time a camera gets a stop quieter, or a stop faster, which is broadly the same thing. For most people, though, shooting anything that's lit, from a news interview that isn't in a warzone to a music video or a short film, sensitivity is going to make things faster and more convenient – and that's great, but that's all.