Why the Sony FS7 II's evolutionary approach is the way forward 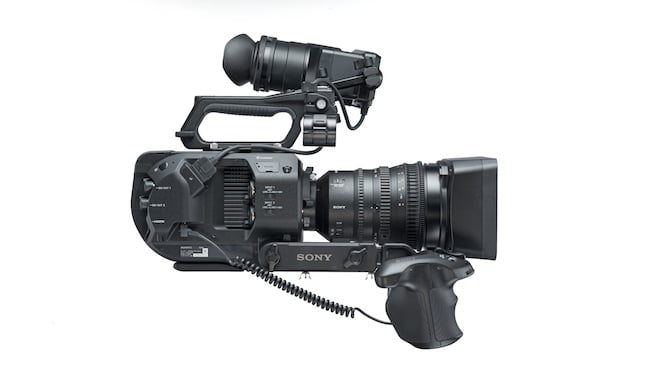 Sony has faced criticism from some quarters for a lack of vision and technological progress with the FS7 II. But, argues David Shapton, why reinvent the wheel all the time: if you already have an inherently great product, incremental tweaks and improvements make perfect sense.

The FS7 MK I was a great camera (and, of course, still is as it’s going to remain on sale alongside the Mk II), so it’s a logical necessity that a camera that improves on it will be a great camera too. Or is it? It depends on what you were expecting.

I believe that Sony has got it right with the FS7 MK II. Not everyone agrees with me, but please let me explain.

The MK 1 was one of those products that, when it was announced, sucked the air out of room. You can almost still hear the gasps as the assembled journalists were told that this is an affordable camera with the same extraordinarily good sensor as featured in the much more expensive F5 and F55 cameras launched a couple of years earlier.

But that wasn’t all.

The shape of the FS7 was like nothing we’d seen before. In fact it looked pretty wild, with a curved rear and an “arm” that meant it could be held with almost as much stability as a typical shoulder-mount camera, and yet was so much more versatile. Putting it all together was a bit of a three dimensional puzzle, but once you “got” it, it was no trouble.

The pictures were astonishing. Here was a camera that was within the budget of almost any serious video professional, with no compromises in image quality and light enough to be used in a wide variety of applications. And with interchangeable “E” mount lenses, there was almost no limit to how you could shoot with this marvel.

Sales have gone on to show that Sony’s radical thinking on this camera has paid off. Apparently it’s still selling as strongly as it ever was, and the supply situation has improved.

It’s the sort of camera that you “just know” that you have to have. One of RedShark’s founders, who was visiting Australia at the time, was watching a Sony webinar from Pinewood Studios (actually hosted by me!) that was about the FS7 MK1. He bought one immediately and has been delighted with it ever since.

All of which begs the question: what should Sony do next?

Well, what they did was the FS5. It’s a smaller camera but very much in the same “family” as the FS7. Again it uses the same sensor, but not quite as powerful as the FS7, presumably so that can be positioned at a cheaper price point. It’s a very capable camera, though, and while I don’t know how well it sells next to the FS7, I know enough people who have one to conclude that it’s sold pretty strongly.

But what about when the FS7 needs updating? That’s exactly what Sony has done with it. They’ve updated it. It’s still an FS7, but it’s a better one.

To me, Sony is at an interesting point in its evolving camera strategy. It has an enormous range of cameras. Contrast this with a company like Apple, that has remarkably few products and vastly fewer product ranges. I have no idea which is the better strategy or whether I should even be making comparisons, but, to be a successful company, you have to find a way of designing and marketing products that works for you — and then, without being dogmatic, stick to it.

So while Sony’s approach is diametrically opposite to Apple's, it works, albeit, sometimes, with occasional added confusion — because there are just so many products!

The sheer number and range of Sony video camera products is astonishing: all the way from its mirrorless still cameras that also shoot video, to the high-end F65 Cinema camera. Somewhat in the middle of this cornucopia of cameras is the large sensor cinematic range. And the point here is: where should Sony go next with this? It’s quite difficult to see, because the range is pretty crowded. I mean, if they were going to release an FS8, where would it fit, and what would it be like? Apart from a completely new generation of large-format cameras (which is entirely possible over the coming years — the F5 and the F55 have been on sale for over four years and the F65 still longer) just about the only thing Sony could do that would make sense in the context of the other cameras is update an existing one.

And my argument is: why wouldn’t they? Why shouldn’t it take a product that is still selling well and “merely” make it better? That’s what it’s done with the FS7 Mk II. Apparently it’s listened to its customers’ feedback on the MK I and implemented their suggestions — particularly to do with ergonomics. On top of this it has added the continuously variable ND filter first found on the FS5, and other new features, such as a new “PL-Style” E-mount compatible mount,  that add up to a significant improvement in my view.

So, no 6K or 8K? Well, that’s probably for another day. It’s incredibly expensive to develop new sensors, and while these will undoubtedly come, I would expect them to feature in a completely new generation, probably starting with the high-end and filtering down.

So I wasn’t disappointed with this announcement. I think it’s a good move. Anyone expecting fireworks might have been let down, but I don’t think that’s entirely fair. The thing is that there are a lot of FS7 I users out there. My own feeling is that I would expect to be able to use a camera in this price bracket for more than two years before having to replace it because something very significantly better has come out. If you do have an FS7 MK 1, your camera isn’t obsoleted by the new one: not by a long way. But if you need a new one, then obviously buy the MK II (I’m not going into pricing here - the fall in the UK£ since June has inevitably put prices up but this won’t be the case in other parts of the world).

Cameras are now so good that I think for a while we’re going to see less overt innovation for a while. The pace of technology hasn’t slowed down, but at the point where a camera is so completely “good enough” then we are likely to see more progress in areas other than the ones primarily concerned with the resolution of the image.

Nobody is surprised when a quality car like an Audi A4 replaces the current model with a new one that looks pretty much like the old one, apart from a few nuanced details. There’s nothing wrong with that. You still have a recognisable product, it’s better than before, and everyone’s happy.

What do you think? Am I being reasonable here or am I missing something?