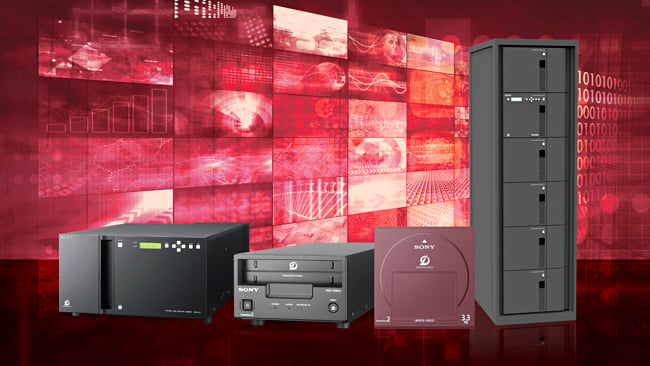 A scalable system for all archiving needs

Your decisions about archiving will have a dramatic effect on the value and the longevity of your business. It’s vital to get it right.

There are some simple rules to help you.

The first is that if you don’t have archiving, then you’re taking a big risk. Portable hard drives cost less now than professional video tapes just a few years back, so it’s tempting to buy these and store your media on them. This is a dangerous strategy, not least because hard drives fail with painful regularity. Don’t expect all your media to be in place in five years when the lifespan of your chosen media is only three years. Don’t mistake making backup copies with making an archive.

The second is that it’s generally true to say that the faster you can access your media, the less secure it will be. You can have your data sculpted into granite, but it won’t store much and will be very slow to read. But it will last for ever. At the other extreme, you can place your media into RAM, but it will be gone the minute there’s a glitch in the power supply.

There’s an entire spectrum in between these polar opposites, including flash memory, conventional hard drives, tapes and all manner of other devices, some current and some completely obsolete.

Today's choice is between hard drives on the one hand: fast but not particularly reliable, and tape on the other: relatively cheap but still with all the disadvantages of a non-linear medium.

Happily, there is a third way.

Sony’s Optical Disk Archive (ODA) combines the advantages of a non-linear medium with the longevity of a deep archive device. In fact, Sony guarantees that your data will still be safe many decades after first being saved.

Optical disks have a huge array of advantages. The medium itself has been around since the introduction of the Compact Disc in the early '80s and it’s a well understood technology. DVD and Blu-ray each increased the maximum capacity of the format and Sony’s latest generation of ODA has twice the storage space of Blu-ray.

ODA is a completely scalable system. It can create an archive direct from the source - a camera, for example - and can scale up to petabyte arrays of automated, robotic storage units.

But the biggest advantage of all is accessibility. ODA is able to play media in real time, and because it stores your content in its original format, it’s even possible to play files from your NLE’s timeline, direct from an ODA archive. This is remarkable. It means that your archive becomes part of your online production system. There’s no need to wait while media is copied: you can try it in your project, waiting only for the relevant disk to load in seconds.

Sony has called the idea of working in real time from your archive “Extended Nearline”. It means that you can treat an ODA as a “nearline” archive. All your media is effectively available for immediate use.

ODA is an open system. Sony works with third parties so that they can integrate their software with ODA. One such company is Storage DNA. They’ve optimised their software for ODA so that you can preview and play material from an ODA archive.

With Extended Nearline, ODA ticks more boxes than any other archive system: it’s scalable, extremely long-lasting and all your material is available, direct to your timeline, within seconds.

Click here for more information on ODA from the Sony site, or if you want to talk to one of Sony’s Digital workflow dealers about ODA and archiving in general, you can find your nearest one from this link.