The need for more (LED) power 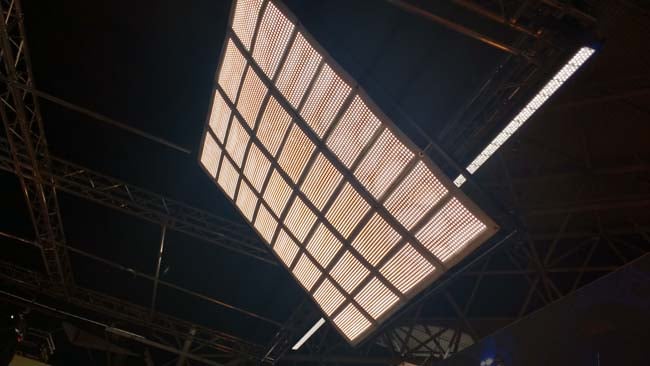 Large arrays of LED panels, such as this flexible one from Litegear, are a much more efficient route to soft light than diffusing an LED fresnel.

As the quality of LED lighting improves, such high efficiency production lighting may be even more useful with more power.

It's increasingly possible to light modest scenes using nothing but low-energy lighting. In the minds of many, this means LED. Although other technologies (HMI, fluorescent) have long been available, it's LED that's forced the market toward affordability. At the same time, power densities have grown to the point where a hundred watts per device is everyday for LED, whether that means a notionally single source, such as the Aputure COB-120 series, or a flat panel softlight.

Still, this only puts LEDs into competition with small tungsten devices in the 650W range, at least if we assume every possible benefit for the LED. It's still perfectly useful, of course. When scenes become a bit less modest, perhaps involving lighting more than a couple of rooms or a small night exterior, the reduced power requirement can make previously impossible things much more feasible. At the very least, low energy light allows small shoots to avoid the swingeing cost of generator rental, achieving much more for the same money, and that's fantastic.

Fresnel LEDs, such as this conversion, can approach the power of a tungsten fresnel,
but generally struggle to match HMI.

However, if we start to scale things up a bit more (say, a night exterior street scene, especially if we need room for vehicles to move around), then some of the most affordable stuff can simply start to run out of steam. LEDs, fluorescents, HMIs, plasma lights and all manner of other clever things are efficient, but, at some point, more is more. This is doubly true if we want to be able to modify and control the light, such as by diffusing it, which costs us a lot of exposure simply by spreading the light more thinly. Current fashions in photography involve a lot of this, and if we're to light anything larger than a very small office, significant output is required from whatever it is we're diffusing.

Let's consider an example. Something like Lee Filters' 216 white diffusion, which is a very dense diffusion similar to a very thin paper, is often reckoned to cost 1.5 to 2 stops, although some people consider even those numbers to be generous. Let's pick on Aputure's excellent COB-120T, which is often quoted as delivering 11,000 lux at half a metre. Overlook, for a moment, the fact that half a metre (about a foot and a half) is an amazingly close range. At ISO 100, that works out to an exposure value of 12, requiring a stop of between 8 and 11 for proper exposure at conventional frame rates. That's great, considering most modern cameras don't go as low as ISO 100; we have lots of light to spare.

Move back to a more realistic distance (a couple of metres, say, for a sitdown interview) and the COB-120T is still achieving a healthy 687 lux, according to the inverse square law. That's still a bit more than exposure value 8 and very shootable at 24fps, if the lens opens up to f/2.8. Put some diffusion in the way, however, and we may be in trouble. If Lee 216 costs us two stops, we need a lens that opens up to (and performs well at) f/1.4. 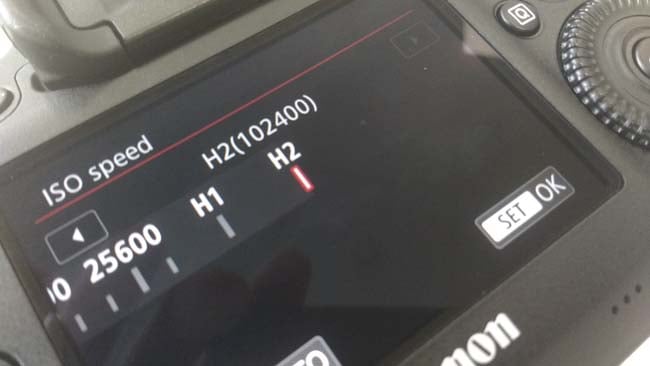 Modern cameras, such as this Canon EOS 5D Mk. IV, can have staggering sensitivity,
but they don't perform at their best at such high speeds.

Such things exist, especially in terms of Nikon stills primes with or without a speed booster, but the focus puller is going to need the help of any available deity and we've got absolutely nowhere to run if we feel the need for a bit more light on a dark subject. Bear in mind also that the two-metre distance we're discussing now needs the diffusion in it. If we want the diffusion to be two metres away, we need to move the light back further to fill it up, for maximum softness, and we lose even more output. The inverse-square law, where the amount of light is reduced by a factor of four every time we double the distance, is only perfectly accurate on point sources of light. That means it's moderately accurate for things like PARs and fresnels, but big diffused sources behave very differently. 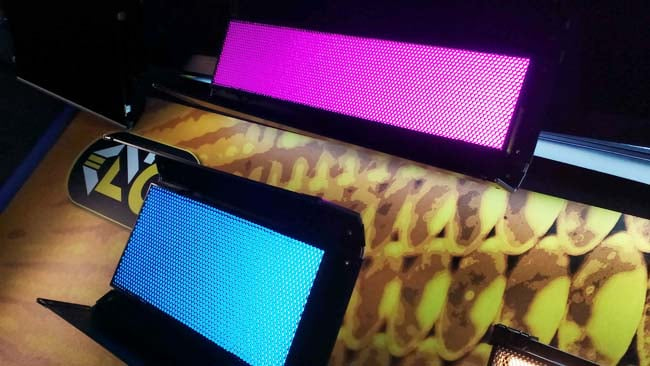 We should be clear here that there's nothing wrong with Aputure's product; the COB series is a very fine set of lights and a good example here precisely because of that. It represents what an LED light of just over one hundred watts will do. Its performance, in terms of sheer brightness, will be broadly the same as many of the other products which exist at a similar power level (other things may have poorer colour quality). What we're illustrating here is the immediate need for more power. Yes, in many circumstances, we'll be shooting at more than 100 ISO, but we might not ideally choose to shoot at much more than 400 ISO, which is the cleanest point for many cameras, and that's only recovered the two stops we lost to diffusion. If we want to light a larger area, we're back in trouble again.

Let's consider a 575-watt light of similar output characteristics to the COB-120T, such as the D5 True Blue HMI Fresnel from Arri. The company's online web calculator considers a half-metre range to be "below safety," so we can't recommend actually using one at that distance, but with the device set to maximum beam width of 56 degrees, the intensity is given as 115,800 lux. To be fair, the COB-120T is quoted as having a 120-degree beam angle, which might make it reasonable to double its notional output in comparative terms, but the HMI, with almost six times the power consumption and broadly similar luminous efficacy, is naturally vastly more powerful, even though the fresnel design itself is not particularly optically efficient.

Of course, we wouldn't expect anything else; the HMI's many times the power. What this does mean is that our diffused interview setup has suddenly become a lot more comfortable. Two metres is very close range – again, Arri consider it "below safety" – but the HMI continues to achieve 7190 lux, which is between EV 11 and 12, or between EV 9 and 10 including a two-stop diffusion loss. We can continue to shoot at an f/2.8/4 split, or choose to cover a much larger area. At a realistic 400 ISO, we can shoot our sit-down interview at a comfortable f/8 and be confident of both focus and lens performance. All of these numbers are based on the tungsten COB-120, since the daylight version, which would be more comparable to the HMI, wasn't quite out at the time of writing. We can expect the daylight COB-120 to be brighter, as bluer LEDs generally are, but this won't make a massive difference to the things we're considering.

Filmgear jas LED fresnels up to 250W, which ought to at least equal a 1K tungsten.

All of this is a (perhaps slightly indirect) way of begging the industry for more power. There are more efficient ways of creating soft light than diffusing a fresnel, of course, with LEDs available in large panel formats which can be arrayed to create soft light. Diffusion is just an example, though. Really, this is about backlighting big night exteriors or filling sunlight. Mole Richardson has offered its JuniorLED, a 900-watt, ten-inch fresnel, for a while, and claims that it is equivalent to a 1.2kW HMI. Arri's famous L7 is rated to about 220W.

Big LEDs have been slow to arrive, but there's already progress. Yuji, who has been offering power LEDs with high colour quality as components and on sticky ribbon for a while, now has a 500-watt module with integrated cooler. This may approach competition with a 575-watt HMI and the module itself is on sale for $500 (a suitable power supply might cost an additional $200). A dollar a watt, plus power supply, is actually pretty competitive.

This is nothing like a finished lighting device and would need to be integrated into a suitable housing to be usable, but higher power is certainly coming. It can't happen soon enough.